Another brave effort for Lim’s Cruiser in UK 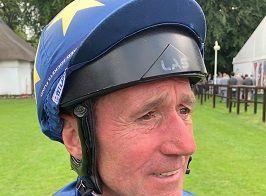 At his second UK raid, the Stephen Gray-trained Casino Prince six-year-old went two better from his eighth place to Godolphin’s Blue Point at his debut in the Group 1 Diamond Jubilee Stakes (1200m) at Royal Ascot on June 22.

The O’Brien-Moore pair were incidentally recording back-to-back wins in the Darley July Cup, which is the fourth Leg of the 2019 QIPCO British Champions Series in the Sprint category after US Navy Flag scored last year. O’Brien was at his fifth Darley July Cup win.

Ridden by Irish jockey John Egan (pictured above) for the first time, Lim’s Cruiser (quoted at 66/1 with British bookmakers) was in a more rearward position than he was at his first English test when he had Vlad Duric up.

When the pace quickened up as they started to climb uphill inside the last 1 ½ furlongs, Lim’s Cruiser looked a little on the backfoot but to his credit, he went through his gears late to finish sixth, just a little over five lengths off Ten Sovereigns.

Interestingly, Lim’s Cruiser was the first older horse across the line. The first five were all three-year-olds to whom he gave weight.

The Martyn Meade-trained and 3/1 favourite Advertise (Frankie Dettori) took second place 2 ¾ lengths away and Fairyland (Seamie Heffernan), another O’Brien, filled third place another three parts of a length away. The winning time was 1min 9.31secs on a going rated as good to firm.

“100m past the post, he passed them all. He had a soft run early; I did tell Johnny to ride him quiet which is his normal pattern.

“He came on strong and kept digging. The track was also too firm, if there was some cut in the ground, they would have come back to him.

“Johnny said the way he ran like he did was fantastic, he caught them all. He was beaten by 3YOs, and he gave them weight, and just missed fifth place by a neck.

“We’re competing on the world stage. Even if we didn’t win, he’s done very well and done us proud.

“I was extremely nervous before as I wanted him to run well and I wanted to be proud of him – and he did.

“The good thing is he is getting better and better. It’s good for his maturity, he was extremely well-behaved.”

Gray would like to believe he has one more bullet left in England, but would prefer to see how Lim’s Cruiser pulls up first.

“He had a hard run today. He tried hard,” he said.

“He’s already back at the stables. By the way, he won the best-groomed prize, which is something – good on Lisa (O’Shea)!

“I know it was going to be tough today, but it was an opportunity to step up and I feel he’s improved by five lengths. To me, he’s in the same form he was when he won the Lion City Cup last year.

“Or else, we can also bring him back home and go straight back to the Raffles Cup.”

The Group 1 Raffles Cup (1600m) is the first Leg of the Singapore Triple Crown series and will be run on September 22.