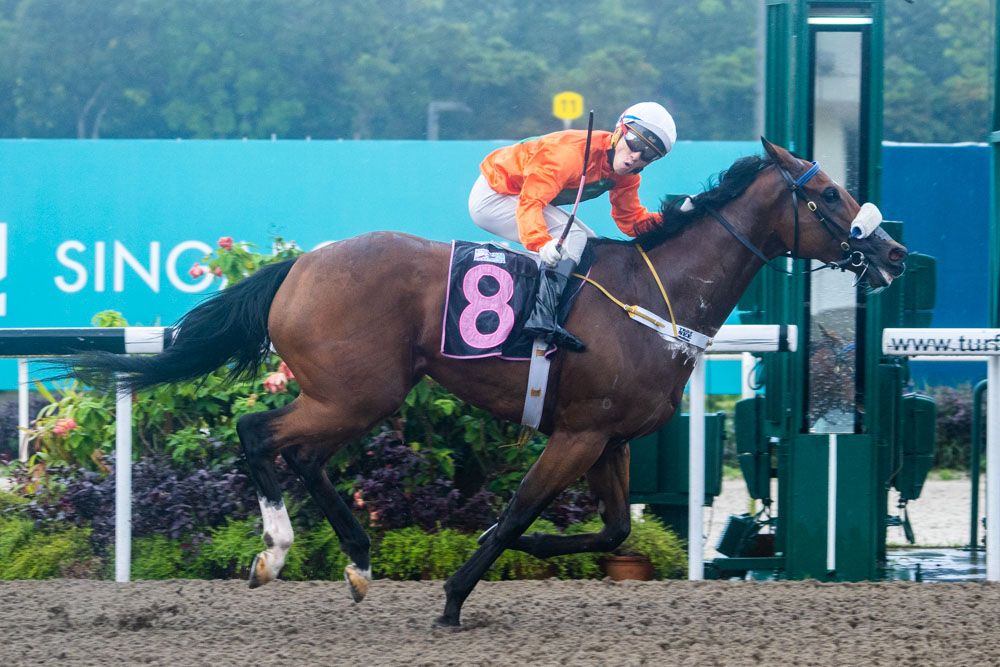 If the phone rings at around 4.05pm Jakarta time this Saturday, and Kiwi trainer Stephen Gray is at the other end of the line, Indonesian racehorse owner Untung Joesoef would know it’s the cue to celebrate – while wishing he could pop a bottle of Green Spot to go along!

The four-year-old seven-time winner (all over 1200m) by Mossman races in Dago’s orange and green disc silks, colours inspired from a drink Untung used to love in his teens, Green Spot, an American orange soft drink that was popular in Indonesia and other South-East Asian countries in the 70s-80s, but its production has now stopped.

In normal times, the 61-year-old would be in the Kranji grandstand, often alongside his batik-clad family and friends, to watch one of his horses race.

Having raced 11 of them in Singapore for 24 wins since 2014, Untung, who lives in Jakarta, couldn’t possibly have been on hand to cheer on each and every runner, but he sure didn’t miss the one that etched his name in solid gold – Bahana lifting the biggest prize of all, the Group 1 Dester Singapore Gold Cup (2200m) in 2016.

It goes without saying he would definitely have booked his air-ticket for this Saturday’s new appointment with Group racing, even if the level of bullishness is not quite on par with the one for Bahana five years ago, but COVID-19 and the closed borders from the Circuit Breaker have deprived him of his main passion in Singapore since March 2020.

With no ‘live’ telecast of Singapore races available in Indonesia, Untung relies on the good old telephone and TV replays on the internet for the results.

“I can’t watch the races ‘live’, but when my horses run, I would check the results on the Singapore Turf Club website and watch the replays a few minutes later,” said Untung, who also claimed the 2016 Group 3 El Dorado Classic (2200m) with Bahana.

“But I can tell on the spot if my horse won. When I win, Stephen will call me right away, but if I lose, there is no phone call!”

Win, lose or draw, there is little doubt that staring at a smartphone sitting still on the coffee table while chewing on fingernails is not as fun as the adrenaline rush he would feel when watching one of his steeds pound away towards the finishing line.

So the silks have a bit of a history, but his interest in racing is woven even deeper into family tradition.

“We used to have horse racing in Indonesia in the 70s, but it’s now prohibited,” he said.

“My father was an owner in the 1950s and his horse Arabia was the best in Indonesia at the time. My stable name Dago is after Jalan Dago, the main street in Bandung, my father’s home.

“He didn’t have any colours of his own, but when I started owning horses in Singapore, I decided to have my set designed after my favourite drink, Green Spot.

“As for naming my horses, I like to name them after meaningful Bahasa words. Bahana is a loud sound, Kharisma is exactly what its English word charisma means, but I’d like to share with Singapore racing fans that Caraka and Laksana are not what they think!

“First of all, it’s pronounced as “Cha-raka”, it’s not the famous New Zealand area (Karaka) for horse sales, it means ambassador. And Laksana is not a laksa dish – it means light while Ksatria means warrior.

“Bahana is of course my best horse, but I also had another good horse Bhaskara but we never got to know how good he could have become – he died after his second win.”

That’s when the conversation invariably turned to his current pride and joy Kharisma, whom, ironically, he never saw win before his own eyes.

“He was showing promise in early 2020, with two placings I think, but then COVID-19 struck and racing was closed. I haven’t been back at Kranji since March last year,” he said.

“Kharisma was a horse I got after I went to the Sydney Inglis breeze-ups with Stephen in 2018. I told Stephen I already had a stayer in Bahana, and with so many few staying races these days, I wanted to buy a sprinter.

“We both liked this Mossman and I bought him for only A$70,000. Look how much he’s brought me back, now, more than $300,000, but stakes money aside, it’s just a thrill to have a good horse like him after Bahana, even if I wished I had been there at at least one of his seven wins.

“With Bahana, we knew from the beginning he was good and could be a Gold Cup horse. It’s only after Kharisma won a three-in-a-row (from Class 4 to Kranji Stakes A, both on turf and Polytrack) that I did believe he could become a Cup horse.

“I know he was supposed to be a sprinter, but funnily, here he is running in a mile feature race. The jockey CC (Chin Chuen) Wong did say after his last race (over 1400m when second to Lim’s Lightning on June 19) that his maximum distance is 1400m.

“I honestly don’t know if he can run a mile, but as there were no races for him before a long spell, Stephen and I thought why not run him in this race.

“It’s at weight-for-age conditions and there aren’t many horses in the field. So we thought why not have another roll of the dice, and then give him a good spell.”

With Kharisma soon to go into pause mode, Untung frets at the even longer downtime awaiting him and the thought he would be even more bored and restless cooped up at home, more so with COVID-19 cases rising in Indonesia and tougher curbs to take effect from Saturday.

Ironically, the former steel pipe businessman had been looking forward to his retirement in June 2020 so he could indulge in the Jakarta-Kranji shuttling more often, as well as seeing the world, but COVID-19 has unfortunately clipped his wings and sunk him into a sedentary life that was definitely not on his bucket list.

The worst part for the avid racing fan is not seeing his soda colours zip around Kranji, it’s like racing without the fizz, but Untung is not giving up on a return to normal.

“It’s very hard, but we don’t have much of a choice. I had plans to travel when I retired last year in June, and now I’m stuck at home,” he said.

“I always enjoyed coming to the races at Kranji, especially with my large family. I have 11 siblings and they all like to follow me to support me and my horses, but it’s not the same just telling them how my horses went.

“Racing in Singapore is also affected. It costs a lot of money to race horses, so I’m not investing in new horses now, but I’ll wait and see how things develop, I may still buy new horses when things pick up.

“My wife Janti supports me and loves racing too, so does my son Osmar. He is 27 and is studying business, he also rides showjumpers, so he may follow into my footsteps one day.

“But not my daughter Charlene who is one year older. She is a doctor and she is not interested in horses at all, but that’s okay, the rest of the family is 100% into racing.

“We hope we can come back when the borders reopen. We miss racing at Kranji so much.”

For now, Untung will be praying for some buzz on Saturday afternoon – the screen of his smartphone lighting up with the familiar jovial face of Gray.