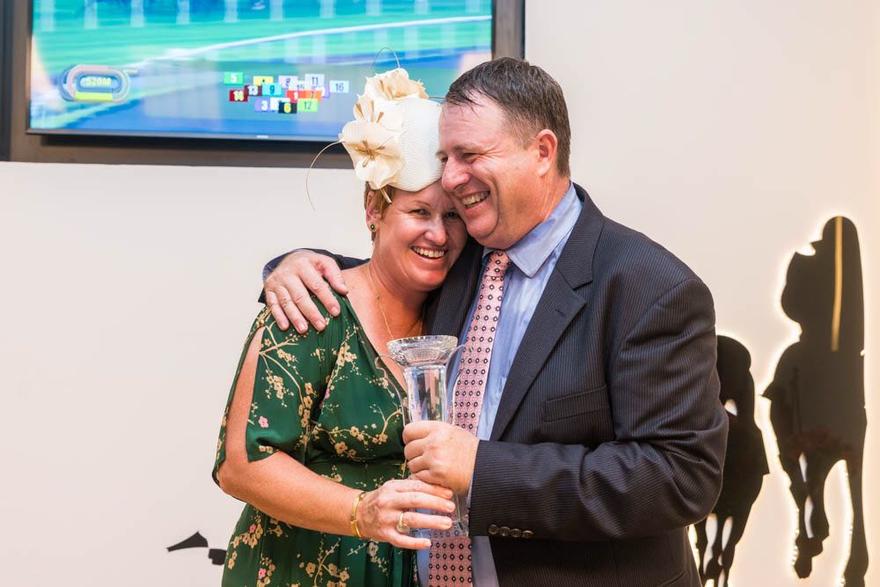 The times are a changing in Singapore, but expatriate Kiwi trainer Stephen Gray has no plans to go anywhere. Hard work and dedication has made his tenure a lucrative one and he’s more than happy to stay put for the time being.

After a lengthy and successful training partnership with his father Kevin, Gray left New Zealand in 2000 with wife Bridget for pastures new and he’s had no regrets about the move. He is now closing in on his 800th winner.

“It was a lot of hard work when we first came here, it wasn’t easy but we got on with it,” Gray said. “We enjoy the lifestyle and we’ve done well.

“This season started off a bit slowly, but the horses are racing well now and we’re kicking a few goals. We’ve got a barn that takes 60 horses so we’ve always got 55 to 60 in work.

“It was a lot of hard work when we first came here, it wasn’t easy but we got on with it.” – Stephen Gray said.

“It’s been a great Industry in Singapore over many years with a great model, high prize money with low costs, but things are getting a little tougher. Illegal betting is having a direct impact on betting turnover and in turn money back into the Industry is being leaked.

“Government understanding is required to arrest this issue. The club’s new Chief Executive is trying his best, the introduction of more $1 million races and the re-introduction of the international races are two big positives.

“The prize-money is still good and so is the racing and while it’s cost effective we’ll be staying here.” – Stephen Gray.

Another side of the business is also developing and successfully getting more owners involved in the stable.

“We have recently created our own model of syndicating horses whereby we handle all within, cutting out any middle man fees and therefore keeping costs down to all,” Gray said.

“It has been very popular with not only Singapore-based owners, but with our new and old Australian and New Zealand-based owners and friends. All Singapore races are shown on race channels in both countries, so you don’t have to miss a race.”

Gray, 53, has had numerous top performers through his hands with major successes including the Kranji Sprint with St Kentigern (NZ) (Kenfair {NZ}), a Patron’s Bowl with Lim’s Reward (Royal Academy {USA}) and a Derby with Lim’s Prestige (NZ) (Pins).

“Having said that, without government understanding and support it will be tough. The prize-money is still good and so is the racing and while it’s cost effective we’ll be staying here.

“Our son James is 17 and he’s in his final year at school and then he wants to do national service in the army for two years.

“Our daughter Katie has got three more years at school and when that’s finished we’ll look at our options. We don’t want to stay here forever and want to get home at some stage for the simpler things in life.”

Given Vision (Belong To Me) gave him a huge thrill by capturing the last two legs of the Three-Year-Old Challenge and yet another highlight of his career was provided by Emperor Max (Holy Roman Emperor {IRE}). He finished second in the G1 KrisFlyer International Sprint before claiming the G2 Stewards’ Cup two weeks later.

He operates under the Copper Belt Racing Stables banner, named after his father’s outstanding multiple Group 1 winner of the 1970s. Kevin’s private training property in the central districts of New Zealand is named Copper Belt Lodge.

“We’ve had a lot of luck with a lot of very good horses,” Gray said.

New Zealand-bred horses have contributed greatly, but he feels for his fellow professionals at home.

“It’s all about prize-money and if you can’t sell horses you’re dead and buried,” Gray said. “Australia obviously has the better money and stallions, New Zealand is getting so far behind, and the local product is dying.

“They will never match Australia and if changes aren’t made now it will be too late. There’s great grass and great people with horses in New Zealand, but good horses can’t pay their way.

“New Zealanders are resilient and passionate, but the next generation won’t be around to race horses if they don’t make those changes (recommended by the John Messara report) and get more government support it will be too late.”

Gray also has a hand in breeding with a handful of broodmares, including the stakes winner Princess Katie (Bianconi {USA}).

“She’s got a Choisir colt and an Artie Schiller colt at foot and she’s going to Dissident,” he said.

Princess Katie’s first foal Hugo (Smart Missile) has made an encouraging start to his Singapore career and finished runner-up on debut at Kranji.