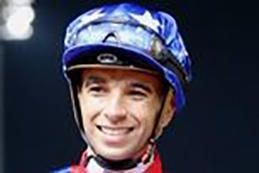 Kranji’s favourite jockey Joao Moreira never fails to enthrall his old home crowd whenever he returns for a quick jaunt after he left in 2013, and Friday night was no different when he got on the board at his third ride, Louey Veloce.

Unsuprisingly, the Brazilian jockey, who now plies his trade in Hong Kong after dominating Singapore from 2009 to 2013, got a full book of rides over the nine-race programme, and invariably, the rides are all either very short or well-backed.

Moreira, 32, did not, however, crack it for a win until the third booking, Louey Veloce ($8). Odds-on favourite Cerdan ($9) did not respond to his riding in the opener in spite of an ideal run while Perfect Commando ($27) led but faltered in the home straight in the next race. 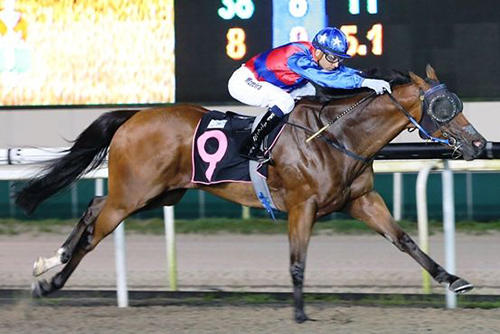 Louey Veloce (Joao Moreira) shows no letting up as he works home a solid winner.

But the Magic show was back on the road in the $60,000 Victoria Peak Stakes, a Class 4 Division 2 race over 1000m, where Louey Veloce looked the goods to become his 737th Kranji winner after he mustered speed from barrier No 2 to take the lead, before handing up to Lim’s Sincere (Salim Yusoff) who came serving up to him on the outside.

Moreira did not panic, allowing Lim’s Sincere to even take the ascendancy before he went full bore upon straightening. Salim got a whiff of an upset to the king’s might for a second when Lim’s Sincere gave the impression he could overhaul Louey Veloce, but not many unseat Moreira so easily when he is in that position, and Salim would know first-hand now.

A two-time winner in New Zealand, Louey Veloce hit the line with 1 ¼ lengths to spare from Lim’s Sincere for his maiden Singapore success. Lucky Giant (Benny Woodworth) ran third another three lengths away. The winning time was 58.93 seconds for the 1000m on the Polytrack.

“To ride a winner back in Singapore is always a great feeling. It always brings back a rush of memories,” said Moreira.

“Steve told me to ride him a little quiet but he wanted to go to the lead early. I had to let him go forward.

“Once I put some pressure to him, he gave me everything.”

Gray was grinning from ear to ear at the winner’s circle, obviously rapt with the first win of a recent stable transfer, and without a doubt, for the “Moreira” feelgood factor as well.

“We’re honoured to have Joao here. The owners all wanted to get a picture with him at the parade ring,” said the Kiwi handler.

“This is what we race for. It’s about people and owners all being happy to share these moments.

“We’re glad we were able to get Joao on two of my horses (Reddot Rising is the other one in Race 6).

“This horse (Louey Veloce) improved by two lengths under Joao. He was meant to go to Malaysia, and Mike Kneebone who looks after him told me to have a look at him.

“He was skinny and didn’t look too good but he has settled in well. He raced well at his first few races for us, but Joao is of a different class.

“It’s a great bunch of owners who own a good horse like Titanium as well. This one is not as good, but they are happy they got the win tonight with Moreira.”

A six-year-old by No Excuse Needed, Louey Veloce was scoring his first win in 16 starts, which were mainly for Michael Freedman and James Peters before moving to Gray. A stakes winner of NZ$20,225 in New Zealand, Louey Veloce has now racked up close to $70,000 for the Graceland Stable.