GRAY CRUISING INTO BUSY MODE AS STARS GEAR UP 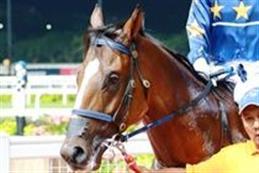 Trainer Stephen Gray has had a fairly quiet start to the season, but things have picked up since, and will probably get busier in the coming weeks as his stable stars come rolling out.

The Kiwi handler was the undisputed headline act at the end of the year when he hogged the limelight in two of the last feature races on offer, the Group 2 EW Barker Trophy (1400m) with Lim’s Cruiser and two days later, the Group 1 Longines Singapore Gold Cup (2200m) with Bahana.

There was a distinctly international flavour to the two wins. Both lowly-handicapped horses had aboard top lightweight jockeys specially brought in for the rides – globetrotting Melbourne jockey Craig Williams on the Indonesian-owned Bahana and Mauritian-born but South African-trained Karis Teetan from Hong Kong on Lim’s Cruiser. 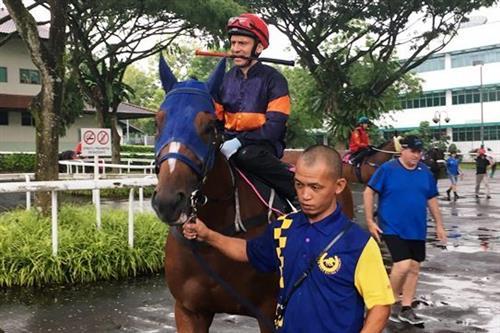 Vlad Duric and Lim’s Cruiser head out for their barrier trial on Tuesday.

Gray has not raced neither Bahana nor Lim’s Cruiser since their November triumphs, while his top gun, Emperor Max has been off the track for even longer – since April 24 when he played second fiddle yet again in a Group 1 race (his fourth), runner-up to Zac Spirit in the Lion City Cup (1200m).

The trio are days or weeks away from their racing comebacks. Emperor Max trialled (his fifth since he was brought back in full work) last Thursday, Lim’s Cruiser stepped out for his first trial on Tuesday while Bahana’s turn is coming up this Thursday.

After taking the whole of January to finally open his 2017 account – with incidentally his 600th Kranji winner, Darc Bounty – Gray has since been churning out winners on a regular basis to now sit in seventh spot on 10 winners. He is now hoping his three high-profile runners can contribute to the stable success.

“Max is coming all right. He ran on well at his last trial,” said Gray about the Holy Roman Emperor seven-year-old’s fourth to The Nutcracker last Thursday when ridden by Michael Rodd.

“I might run him in the Rocket Man Sprint next Sunday week, but maybe not. It’s quite frustrating with the weights and we’ll have to see how much weight he gets.

“The Lion City Cup is still his main race and he is right on target for that. It’s not ideal as there are no other races for him here, but we have done our best to keep him ticking over for that race.”

Lim’s Cruiser, whose rating is 84, 15 kilos less than Emperor Max’s 114, is on the other hand better off at the weights – for now. He will make his racing comeback in the Group 3 Rocket Man Sprint (1200m), a handicap race slated as the second Leg of the Singapore Sprint Series and formerly known as the Kranji Sprint.

“Lim’s Cruiser had a nice break, but I didn’t put him out of work. I’ve kept him ticking over,” said Gray.

“It was his first trial today, and I told Vlad (Duric) to just let him naturally gallop around. He did it better than I thought he would.

“He was probably freshened up, but he went pretty good, I must say. He’s a natural runner and he had a good blow.”

After a decent jump, the Casino Prince four-year-old settled in midfield before gathering speed without Duric moving an inch in the saddle. The Australian jockey stayed that way right through, just allowing the chestnut to coast to a close-up third place to noted frontrunner White Hunter (Shafiq Rizuan).

It was the perfect way to top him off ahead of the Rocket Man Sprint. The trip appears ideal for a comeback, although Gray is still not 100% sure how to pigeon-hole the Lim’s Stable-owned galloper.

“The 4YO series is his main target, but it’s still some months away (first Leg is the Group 2 Stewards’ Cup over 1400m on May 28). He has to get a few runs under the belt, and I thought why not run him in the Rocket Man Sprint.

“He should get in at a light weight. It’s like a 1200m trial where he’s running for prizemoney.”

Duric has partnered Lim’s Cruiser throughout his first prep, except at the one that mattered the most when Teetan was roped in to make the 50kg weight. The Rocket Man Sprint will feel like deja-vu again for the Australian rider, who was fined $200 twice for not meeting the weight on two runners on Sunday, but he stayed positive about such realities in a jockey’s life.

“It was a very good trial. The horse is flying,” he summed up.

“He’s a high-class horse. He had a lovely break and he has come back even better.

“I can tell he’s furnished and developed into a fitter and stronger horse, but unfortunately, I won’t be able to ride at the low weight he will get in the Rocket Man Sprint; it’ll be for another time.”