Champion sprinter Emperor Max makes his long-awaited “annual” racing comeback in the Lion City Cup next Sunday, but in the meantime, his half-brother Red Duke slotted in as the perfect teaser ad with a gutsy maiden win in the same familiar black and pink silks on Friday night.

Coming out for his fifth start, the three-year-old by Duke Of Marmalade out of Maxerelle, the same dam as Emperor Max’s, Red Duke ($17) took the bull by the horns from the start in the $65,000 Initiation race over 1400m, dictating the pace to go and reach the line virtually uncontested.

Favourite Redoubt (Manoel Nunes, $13) did try to peg him back but those relatively easy sectionals under Vlad Duric’s superb rating paid off as Red Duke held his challenger safely at bay, lengthening even further the frustrating wait for a second winner for his trainer Theo Kieser (who has not won since Supersonicsurprise on January 6). 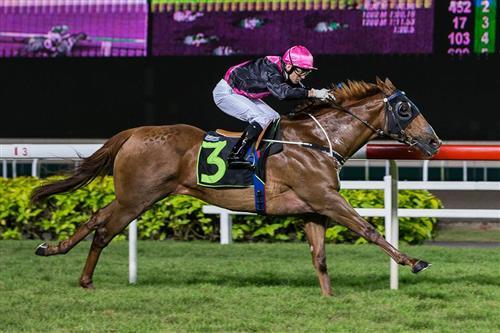 Red Duke fell in by 1 ½ lengths from Redoubt with Lim’s Sparkle (Danny Beasley) third another three parts of a length away. The winning time was 1min 23.41secs for the 1400m on the Short Course.

Drs Gordon and Ernest Yau’s second Kranji runner may have taken longer than his more famous sibling – Emperor Max won at his first five starts – to get off the mark, but he has got there in the end, and in convincing fashion. Red Duke’s elder brother (x Holy Roman Emperor) has not raced since his second to Zac Spirit in last year’s Group 1 Lion City Cup (1200M) and will attempt to finally annex the country’s premier sprint race after three placings in a row.

Trainer Stephen Gray, who also trains Emperor Max, was delighted Red Duke has shown he was not without some of the good family genes, but said the two brothers were, however, totally different animals.

“This one is a stayer, not a sprinter like Max,” said the Kiwi handler.

“He is a mile to 2000m horse. He’s had five starts for one win and two seconds, I couldn’t be happier with him.

“Last start, he had to lead because he was drawn wide like tonight, and he was beaten by a very good horse (Lim’s Royal) on the line. He got fitter and he won tonight.

“I haven’t pushed him early, I’ve taken my time with him. I’ve trained him on a straight line and he’s come good.

“It’s quite amazing he’s won tonight because as a three-year-old, he cracked the sesamoid of his back fetlock and they said he wouldn’t race again.

“Hats off to Gordon and his manager Sean Dingwall who look after his horses. This horse will win more races.”

Duric said it was not plain sailing even if it looked easy on TV.

“He led quite comfortably, but he was switching leads a fair bit,” said Duric who has now extended his lead to three wins over Michael Rodd after he saluted earlier aboard Tannhauser, and later brought up a hat-trick of wins with the Laurie Laxon-trained Mr Clooney in the penultimate race, the $60,000 Class 4 race over 1700m.

“I just let him gallop and into the straight, he just kept finding and hit the line good. He is screaming for more ground.”