GRAY READY TO UNLEASH THE FURRY

Straight-talking trainer Stephen Gray is someone who takes no bull, but this Friday, he is counting on a “bear” to let his talent do the talking.

Unless you have been living under a rock, Tannhauser is being touted as “the next big thing” in the wake of his exhibition gallop in class record time at only his second start in a Restricted Maiden race over 1100m on April 7.

Gray was there and was among the first to let out a whistle of admiration as the Tavistock three-year-old flattened his rivals, albeit still very green. The Kiwi handler just loves a good horse, even when he is not the trainer. 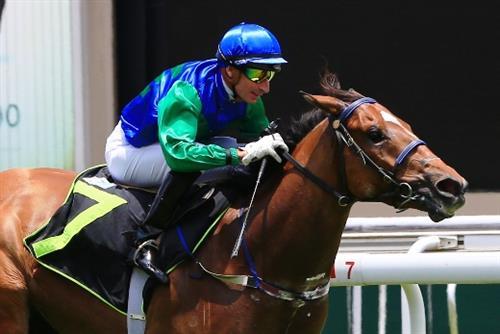 Bear Witness (Gerald Mosse) at his debut win on March 26.

He would rather let his horses walk the talk, though. He is not one to spruik his own horses, even if he would be forgiven if he had tried it on the exceptional Lim’s Cruiser, a Group winner at his last three runs, including the Group 1 Lion City Cup last Sunday.

All the Tannhauser hoopla has put a bit of a smirk on his face, but at the same time, he says it puts bums on seats.

It’s even more fun when he has a Bear who can stir up the hornet’s nest – Bear Witness, his no less impressive debut winner in a Restricted Maiden race over 1200m on March 26.

“I read that people are saying Mike Clements’ horse is the next Spalato. That’s great!” he said.

“Then I guess we will be running for second place. I have to say he is a bloody good horse, he looked super duper when he won and he seems to go well on Polytrack.

“He’s a lovely-looking horse. I read he had a few issues (wind op), the ratio of cases that get this right is quite low, so it was quite remarkable he won that way and broke the class record.

“But if Bear Witness can beat him tomorrow, what will that make him? The next Rocket Man I guess!

“Anyway, it’s good to have a bit of fun at the races. It’s all been a bit too serious lately.”

In the same light-hearted tone, Gray said he knew Bear Witness was no slouch from the start, though he did have visions of a couch throw at the Gold Coast sales ring when he first laid eyes on him.

“He was so woolly and hairy when I first saw him at the yearling sales, like he just came out of a paddock. Nobody wanted him, he looked like a piece of s***,” he recalled.

“But he was a nice walking horse and there was something about him that I liked. We bought him for A$12,500 which was pretty expensive for a woolly bear!

“As he was by Star Witness, we came up with the name Bear Witness, which was pretty clever, as he was like a bear. I bought him for two good clients of mine, Mark Mitchell and Chris Lees.”

That was when Gray’s mood turned more solemn.

“Unfortunately, Chris, who used to work here in Singapore, fell very sick and died. He had a brain tumour,” he said.

“Chris used to own horses like Optimus with me. He also raced a very good Brisbane horse called Cylinder Beach, who just won the Toowoomba Cup (last Saturday week).

“After Chris passed away, Mark decided to buy his share and he is now Bear Witness’s owner.

“We knew he had ability as he trialled very well in New Zealand. He showed a great personality.

“In Singapore, he showed speed and could really gallop. Michael Rodd rode him in a trial and told me I had a pretty good horse there. We weren’t all that surprised he won on debut (with Gerald Mosse).

“I’m always keen to support Novice races as it’s good for those three-year-olds to go through their grades. He is good at the handicap, even if he is going for the first time on Polytrack.

“Watch out Mike, hunting season is on, our bear is hungry and out to get you – but there’s not much meat on him to eat.

“Anyway, it’s all a bit of fun and games. It should be about the horses, not the trainers, may the best horse win.”