STAR FOUR-YEAR-OLD IN CRUISE CONTROL AHEAD OF FIRST LEG

The Casino Prince four-year-old was already a two-time Group winner in last November’s Group 2 EW Barker Trophy (1400m) and the Group 3 Rocket Man Sprint (1200m), when he came out to blow sky-high all expectations in last month’s Group 1 Lion City Cup (1200m) when he downed the best sprinters in the land to make it a hat-trick of wins in ‘black type’ events.

Gray did not quite map out the Lim’s Stable-owned gelding’s programme with the premier sprint race featured anywhere in a prime spot, but Lim’s Cruiser was in such good form at the time that they would have been left guessing ‘what could have been’ if they did not roll the dice one last time in the country’s richest sprint ($800,000) before his real target – the Singapore Four-Year-Old Challenge. 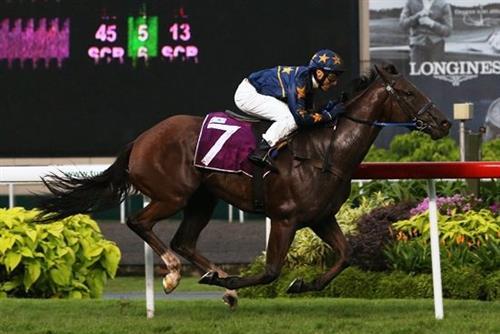 Lim’s Cruiser (Danny Beasley) went for a casual spin around the track in his Thursday barrier trial.

It is almost certain Lim’s Cruiser will be the hot favourite in the first Leg, the Group 2 Stewards’ Cup over 1400m on May 28, but Gray is leaving nothing to chance.

It was clear from the way Lim’s Cruiser (Danny Beasley) was dropped at the rear early, ahead of only 2016 Singapore Horse of the Year Debt Collector (Michael Rodd) bringing up the rear, that the exercise was only about topping off his condition.

Even as Debt Collector went whoosh past him on his way to a fast-finishing third place, Beasley never asked for an iota more, just allowing Lim’s Cruiser to complete his job on his lonesome at the back, seeing them all in last place, more than eight lengths astern.

“He didn’t do much today. He went real good and Danny Beasley was pleased with him, too,” said the Kiwi handler.

“He’s a real cruiser actually. There is no real need to give him too much to do.

“He’s already got a couple of races on his back. I think he will be fresh to run a strong 1400m next Sunday.”

The Singapore Four-Year-Old Challenge as the main mission for Lim’s Cruiser this term was always on the cards and became a no-brainer shortly after he won the EW Barker Trophy last year.

Two feature races have in the interim fallen his way, more as a warm-up than anything else really, but Gray will be putting on his battle face from now on. The series kicks off with the Stewards’ Cup before moving to the Group 1 Patron’s Bowl (1600m) in three weeks’ time on June 18 before climaxing with the Group 1 Emirates Singapore Derby (2000m) on July 9.

Gray can pride himself for having annexed all three races, albeit not in the same year. Just-retired ace sprinter Emperor Max captured the Stewards’ Cup in 2014, he won the Patron’s Bowl, then a Group 2 race, with Lim’s Reward in 2003, but he is probably more famous for landing the Emirates Singapore Derby with Lim’s Prestige with pick-up rider Din Azis (in replacement of the indisposed Oscar Chavez) in 2007.

Gray knows he does have the right weapon to snare one or two of the Legs this year, if not all with a bit of luck, but he is going in one Leg at a time.

“Lim’s Cruiser will run against some very good 4YOs this year. He is in great form, but the horses he will meet are no slouch either,” said Gray.

Two of his likely rivals in the famed series were also in that barrier trial on Thursday, namely 2016 Singapore Horse of the Year Debt Collector, Group 2 Merlion Trophy (1200m) and Group 3 JBBA Moonbeam Vase (1800m) winner Infantry, and Alibi.