A hush swept over Kranji in the opening event, the 35,000 Open Maiden race over 1400m when Stephen Gray’s Irish-bred newcomer Kokoni sprang a $137 upset at his second local start on Friday night.

Winless in six starts in UK for Sir Michael Stoute, the Acclamation four-year-old did not etch a deep impression at his Singapore debut when seventh to stablemate Red Duke.

On that night, the Lucky Stable-owned gelding donned blinkers, which in hindsight, Gray felt was not such a good move. 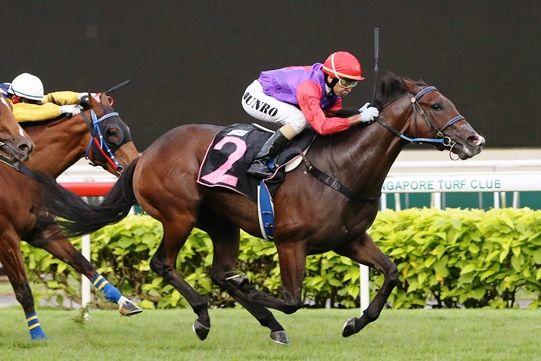 “I made a mistake at one of his barrier trials before his first race. He wore blinkers and he had to wear them on debut,” said the Kiwi handler.

“He didn’t run a bad race, though. His last barrier trial without blinkers was brilliant and Alan Munro was very happy with him.

“Those European horses take a while to settle in, and this one is quite forward. We fancied Aurora Australis ($19) more in the race, but he was held up for a run.”

The Shane Baertschiger-trained Farees (Matthew Kellady) was the one that punters backed off the map ($11). The Foxwedge three-year-old gave the impression he would live up to the hot tag when he improved from a midfield spot to sit in a striking position down the straight, but Kokoni, who had made an earlier move, held him off rather easily to scoot clear to a 1 ¼-length win.

Electing for frontrunning tactics for the first time, Majulah (Wong Chin Chuen) did very well to hang on for third place another short head away. The winning time was 1min 23.36secs for the 1400m on the Long Course.

“He travelled well throughout and he quickened nicely in the straight,” said Munro.

“It was a good introduction to racing in Singapore for this horse.”

Gray has only recently been training a handful of horses from the Lucky Stable, one of Singapore’s most famous owners, such as the former Hong Konger Mazandaran (now in Malaysia) and Maidanz Beauty (their first winner), and Kokoni is the second to seal the new partnership with victory.

“They are lovely people to deal with and I’m sure they will have a lot of fun with this one.”