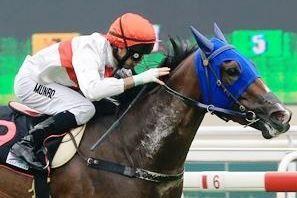 The Group 1-winning trainer has enlisted the help of his fellow countryman to ride Newlands (pictured above) in the Group 1 Queen Elizabeth II Cup (1800m) next Sunday.

Bosson has been a frequent visitor to the Republic Island since he was 17, when he first rode at Bukit Timah as an apprentice jockey for ex-trainer Bernard Ang.

A lot of water has flown under the bridge since, most notably three junior and two senior titles, close to 50 Group 1 wins on both sides of the Tasman Sea – and also two of Singapore’s biggest races, if not the biggest – the Group 1 Singapore Gold Cup with the Laurie Laxon-trained Recast in 2007 and the Group 1 Emirates Singapore Derby with the Bruce Marsh-trained Race Ahead in 2010. 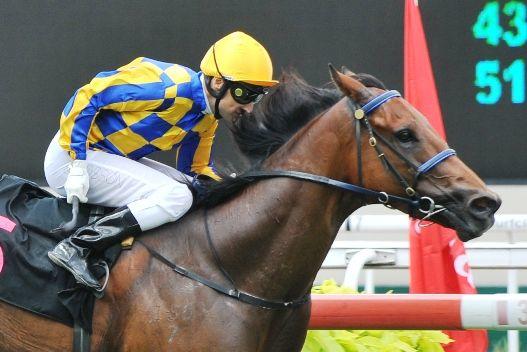 Opie Bosson punches Convict home for trainer Stephen Gray at the Kiwi hoop’s last win at Kranji on July 15, 2012. There is every chance he may don the same Copper Belt Racing colours next Sunday.

Bosson, 36, rode as a freelance jockey at his longest stint in 2012, but with first priority for Marsh and Mark Walker, a trainer with whom he ruled the roost during the Darci Brahma and Princess Coup era back home in New Zealand.

It would seem those Kiwis are a tight bunch as it is now Gray’s turn to hire the top gun! But the amiable handler is not one who picks a jockey just because they share the same place of birth – he goes more for the polish in the saddle.

Last November, he brought in two cameo jockeys and they both hit the target – Hong Kong-based Mauritian lightweight jockey Karis Teetan (through Teetan’s good mate ex-Singapore Turf Club racing commentator Gareth Pepper) on Lim’s Cruiser in the Group 2 EW Barker Trophy (1400m) and Craig Williams (through Vlad Duric who could not make the weight and recommended his fellow Victorian friend), another jockey who can ride light, on Bahana in the Group 1 Dester Singapore Gold Cup (2200m).

But it’s true he does know Bosson a little better. Besides, even if Bosson’s last haul of 18 winners in 2012 were scored mainly for Marsh (13) and Walker (three), he signed off his stay – cut short in July for personal reasons – with a horse of Gray’s, Convict on July 15, 2012.

“It’s great that Opie has accepted to ride Newlands for Paul Hickman in the QEII Cup,” said Gray.

“We’re really pleased we were able to get a jockey of his quality and who has often ridden in Singapore, therefore knows the track very well.

“Opie will hold his own anywhere in the world. We can’t wait to see him partnering Newlands in the QEII Cup.

“Of course, Opie will also get to ride other horses of mine on that day.”

Gray will also enter Bahana in the half-a-million dollar race. He has booked Glen Boss, who won last year’s QEII Cup atop Laughing Gravy last year, on the Elusive City five-year-old, who has had two warm-up runs over distances not made to suit this campaign.

“I’ve also got Bahana in the QEII Cup. He’s come along very well and I was happy with his two runs this prep,” said Gray.

Boss rode the Indonesian-owned stayer to 11th place to the dead-heating pair of War Affair and Storm Troops in the Group 3 Saas Fee Stakes (1400m) two weeks ago, less than seven lengths astern.

Meanwhile, Gray will be taking a deep breath as his rising star Lim’s Cruiser takes on a small but select field in the first Leg of the Singapore Four-Year-Old Challenge, the $300,000 Group 2 Stewards’ Cup (1400m) this Sunday.

The son of Casino Prince has remarkably won three Group races in a row at his last three runs, the EW Barker Trophy, the Group 3 Rocket Man Sprint (1200m) and the Group 1 Lion City Cup (1200m), and is now bidding for a fourth hurrah.

“Lim’s Cruiser is in great form. He galloped very well on Wednesday, Danny (Beasley) was very happy with him, and we can only hope for the best,” said Gray.

“Win or lose, I will have a nice glass of wine later at night… probably a few more if he wins!”