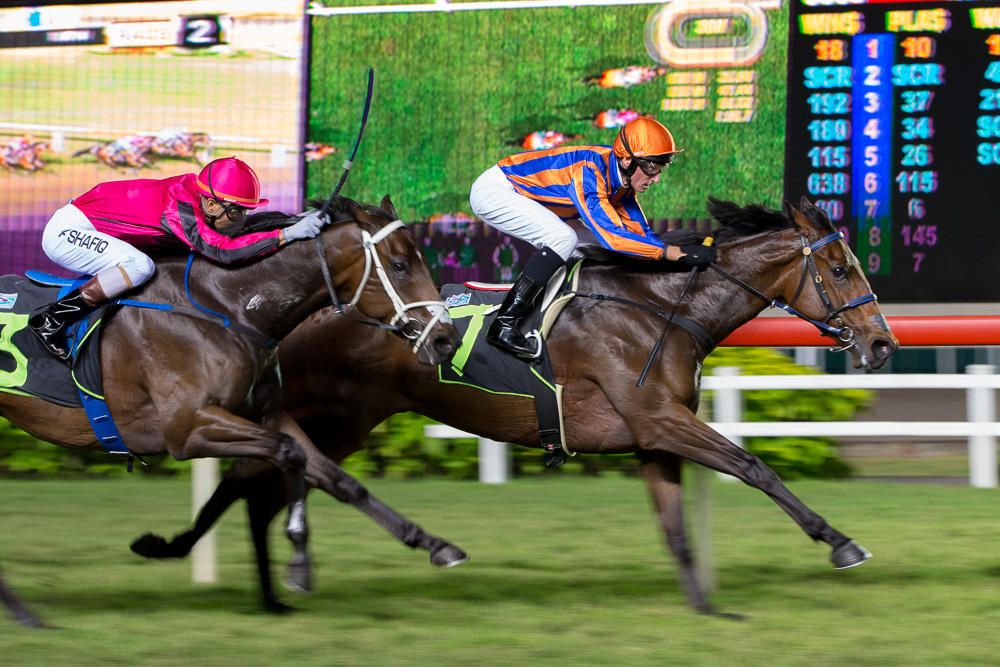 The famous Recast tangerine and blue colours were back in the spotlight on Friday night after debutant Sky Rocket made all in the $65,000 Initiation race over 1200m.Sabah-based owner Patrick Lau was in the mid-2000s one of the leading owners at Kranji with Singapore Gold Cup winner Recast and Horse of the Year Mayo’s Music, but has since scaled down his ownership base.The head count had been zero for a while until he sent a horse by Recast, Destiny Knight, to trainer Stephen Gray a couple of years ago.

Sky Rocket (Glen Boss, on the inside) fends off Black Quail (Shafiq Rizuan) to score an all-the-way win

on debut.The Australian-bred’s three wins in Class 5 from 21 starts did not bring shades of Recast by any stretch of the imagination, but it has certainly whetted Lau’s appetite back for more of that spine-tingling winning feeling.


“Patrick wants to make a comeback, not in a big way but enough to go around. He has been looking for a horse for a while. He doesn’t like to buy yearlings, either tried horses or horses out of trials,” said Gray.


“My agent Gary Carvell spotted this horse (Sky Rocket) and bought him out of a trial he won in Avondale. It turned out it was Laurie Laxon who bred him from his mare Ruppertsberg and sold him as a yearling to Mark Fraser-Campin and his brother Chris.


“He was meant to go to Hong Kong but he did not pass a vet test because of his stifle, but our vet said it was not a serious issue and that’s how we were able to get him.


“As it turned out, he showed ability from Day 1. I gave him a grass gallop on Monday, and Glen Boss was very happy with him. 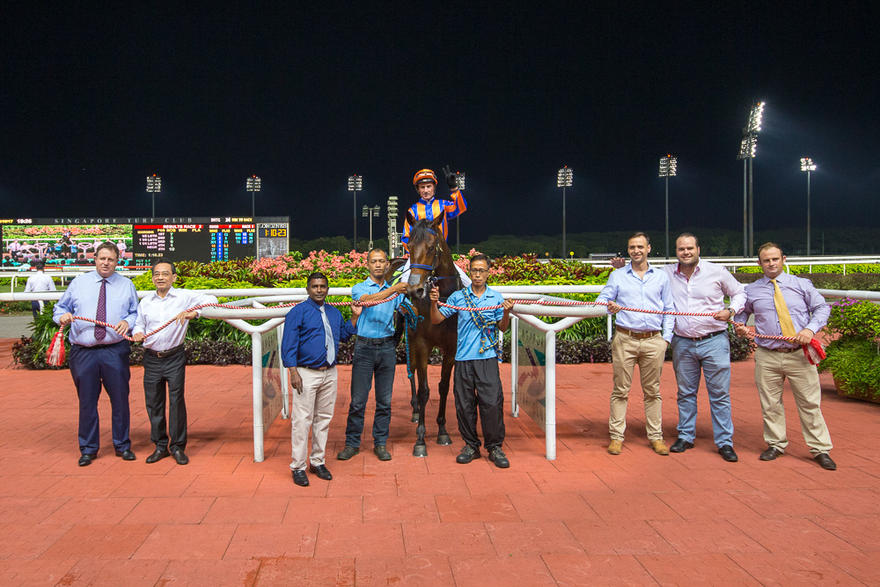 “It’s always an advantage to have Glen on these young horses. I’m starting to use him a lot more as I’ve noticed he doesn’t get used all that often.


“Just like Michael Rodd, he looks after these young horses and gives you very good feedback.


“What the horse did tonight was very impressive as they ran very fast sectionals and the second horse (Black Quail) is a very good horse and stayed with him everywhere, which goes to show my horse is pretty high class, too.


“He showed natural speed and will improve lengths on that first run.”


Boss, who was at a race-to-race double after scoring aboard the Leslie Khoo-trained Kubera’s Chief in the first race – the perfect send-off before his dual-Group 1 mission in Caulfield on Saturday, Tom Melbourne in the Toorak Handicap and Riven Light in the Ladbrokes Stakes – could certainly take more than just the credit of being the one warming the saddle on the Gray newcomer.


“He’s a really nice horse. He trialled up nicely and Steve suggested we trial him again,” said Boss.


“He went real hard at first, broke 24 in the first two furlongs, but he came back well for me.