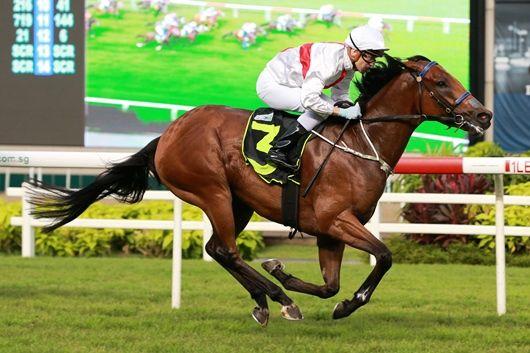 Trainer Stephen Gray’s charmed run since his Lion City Cup triumph on Saturday continued with a newcomer in the shape of King’s Speech obliging at his first run in the $85,000 Restricted Maiden race over 1200m on Friday night.

The Kiwi handler indeed had a week to remember when his stable star Lim’s Cruiser won his title defence in the $1 million Group 1 sprint race over 1200m on an international stage that also saw the launch of the Invitational Group 1 Kranji Mile (1600m) on the same night.

For good measure, Gray also enjoyed a training double with Hyde Park winning with Hong Kong hoop Karis Teetan in the plate, and now he has saddled another winner for the same owner, Paul Hickman of St George Stable, one of his staunchest supporters.

Gray said he had not really expected the Darci Brahma three-year-old to get on the board at his launch, and he was more the sort who would improve with more mileage.

“I normally give my horses three barrier trials before they get their first run, but I told Vlad (Duric) as there was nothing on grass, I might as well give him his first run in this race,” he said.

“I still didn’t think he would win first-up even if he’s done well at his trials at home.

“At the 300m, I thought he would run second or third, but he impressed me with that win. There is still so much improvement in him.

“It’s great for Paul. That’s what racing is all about, Garry Carvell (bloodstock agent) and myself bought this horse as a yearling for NZ$80,000 and he’s won about $45,000 at his first race.”

“Steve said to me prior to the race that the horse impressed him even if he was still green and cheeky,” said the Singapore champion jockey.

“I thought he would need half a dozen starts before he improves on his mannerisms, but to the horse’s credit, he was the ultimate professional. He did draw a good barrier (four) which is important and we had a beautiful run throughout.

“The pace was steady at one stage, and I was worried a little, but he showed good quality to win the race.”

Settled in fifth place with a nice smother among runners, King’s Speech ($54) was peeled out for his run at the top of the straight, and once he had the winning post in his sights, he went through his gears really well to race past the better-fancied My Friends (Barend Vorster) and score rather comfortably by 1 ¾ lengths.

Our Showcase (Michael Rodd) ran third another three parts of a length away. The winning time was 1min 10.12secs for the 1200m on the Long Course.