Easy Does It as Gray’s promising four-year-old returns 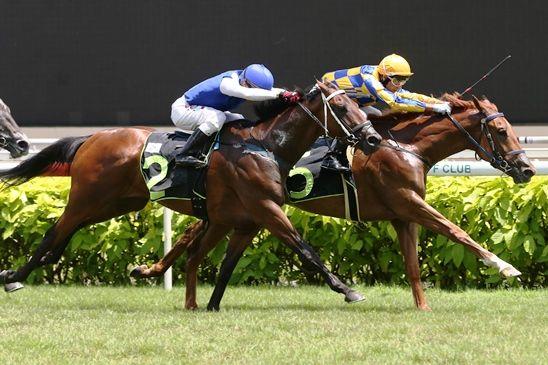 The early promise shown by Easy Does It before a tendon injury threw a spanner in the works seemed to be still there when the well-named chestnut spun around to a fairly casual barrier trial win on Thursday morning.

Unsighted for more than one year after only his second start when third to King Louis in a Novice race over 1200m in November 2017, the four-year-old son of former two-time Singapore Horse of the Year Super Easy was a sight to behold in his hit-out for Ben Thompson.

Tracking up the Desmond Koh pair of Oxbow Sun (Tengku Rehaizat) and Asia Spirit (Hanafi Noorman) from the start, the imposing galloper was not even out of second gear as he ambled past Asia Spirit inside the last 150m to go and win the trial comfortably.

Gray has always held Easy Does It in high regard, even before he scored on debut for Alan Munro in a Restricted Maiden race in October 2017.

The Kiwi handler had to, however, put his lofty plans – the Singapore Three-Year-Old Challenge was an option – on the backburner when the gelding succumbed to suspensory issues early in the new 2018 season.

The disappointment was even more pronounced given Easy Does It was one of the first horses from his yard to be syndicated out.

“He did his tendon after his second run. It was his suspensory,” said Gray.

“That was a shame as he did show plenty of promise at his debut win, and he was one of the first horses we had in syndication.

“He beat Zac Kasa (third) on that day, and look what Zac Kasa has gone on to achieve. then he ran an unlucky third before he broke down.

“He had a year off in Malaysia with Sandy Lines. They’ve done a great job with him and he’s come back as good as he was before the injury.

“He looked pretty good this morning. We’ve given him every chance and he’s grown out further.”

Gray has not mapped out any specific plan for Easy Does It given he was returning from injury, preferring to ease him back into the game at the right time and in the right race.

“Since we’ve waited that long for him, I preferred to wait until the Polytrack races are over. I didn’t want to run him on Poly.

“He’s a nice horse and it’s taken a long time to get him back. This game is not for sooks, he’s doing well and we’re now in the lap of Gods.”