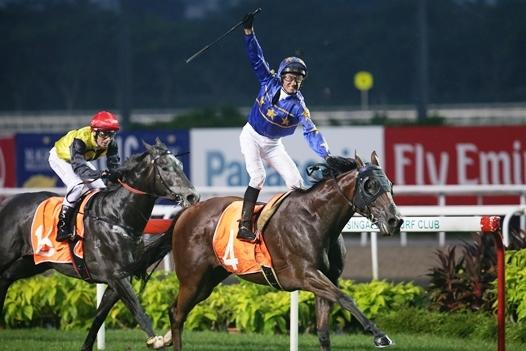 Jockey Troy See is looking forward to bouncing back from a two-day careless riding suspension with two bright big-race chances courtesy of the Lim’s Stable this weekend.

See has been the go-to rider for the champion outfit for a while now. While he boasts a record of one win and one third from three rides on Lim’s Lightning, he will, however, be at his first ride aboard their stable banner Lim’s Cruiser.

He did get a foretaste of the engine inside the Stephen Gray-trained two-time Singapore champion sprinter and two-time Group 1 Lion City Cup winner in his barrier trials and gallops, and has each time jumped off suitably impressed.

With the Casino Prince six-year-old having a solid first-up record, many believe he can come up roses in a Group race at his comeback since his unplaced run in the Group 1 Longines Hong Kong Sprint (1200m) in December, but the cool rider was as usual unfazed by the weight of expectation resting on him.

“Lim’s Cruiser is one of the best horses I’ve ever ridden,” said See.

“His work was pleasing. He’s very fast and he shows it in his trackwork.

“His main goal is a third successive Lion City Cup (May 25), but he had to start somewhere as we don’t win any prizemoney in trials, even if the handicap conditions of the Rocket Man don’t suit him.

“He will have to give Bold Thruster seven kilos, but it’s still better than a nine-kilo pull if War Affair had not been entered.”

Had Lim’s Cruiser on 113 points been the highest-rated runner in the Rocket Man Sprint, he would have been the designated topweight on 59kgs, but with War Affair taking pride of place on 117 points, Bruce Marsh’s 2014 Singapore Horse of the Year, who is resuming from an even longer break, Lim’s Cruiser drops to 57kgs with Bold Thruster at the minimum weight on 50kgs.

See has tagged Bold Thruster as the horse to beat, more so when there is a touch of revenge in the air.

“It’ll be hard to beat Bold Thruster first-up with the seven kilos difference, but if we do, it’ll be like exacting revenge for his ‘little brother’ Lim’s Lightning,” said See.

He won’t have Bold Thruster in his way in the second Leg, but he does have a first test over seven furlongs as a hurdle to pass. See is optimistic the son of Lope De Vega can see it out, though.

“There is a question mark over the 1400m for Lim’s Lightning, but we’re quietly confident he should stay,” he said.

“There is good prizemoney in the race. The horse is in good form and we can only hope he delivers on the night.

“I’m very thankful for those two good rides from Mr Lim Siah Mong and Mick Dittman (racing manager), and the good association I’ve had with them. Hopefully, at least one of them can win this weekend.”

See is not without a ride in the third feature race of the week, the $175,000 Group 3 Moonbeam Vase (1600m) on Sunday as he is also booked on the James Peters-trained Nova Strike for the Nova Racing Stable.

Even if he does boast one successful partnership (Kranji Stakes A race over 1400m in January 2018) from the Red Giant six-year-old’s haul of 10 wins, See is not really holding his breath this time.

“At his best, he was always in the mix in Group races, but always a few notches behind the good horses like Debt Collector or Countofmontecristo,” he said.

“His recent form has not been all that great, but it’s always good to have a ride in a Group race than none. With some luck, he might pinch a place.”