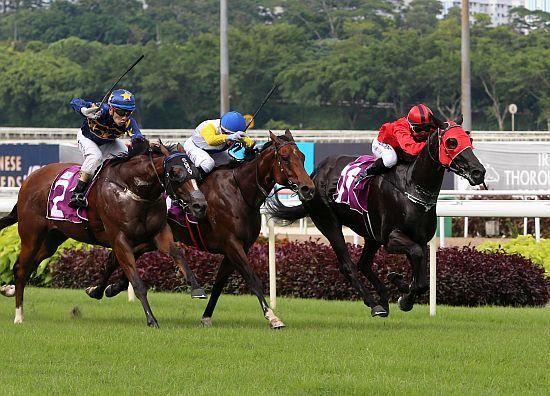 The only time it was no smash-and-grab raid was in 2014, but he still didn’t go back to Sha Tin empty-handed. He won on Kate’s Keeper – for Gray.

Purton actually claimed another winner for the Kiwi handler at his 2015 visit, Bhaskara.

Again, the ad-hoc pairing occurs as a result of Purton flying in for another hit-and-run mission at Kranji while taking other rides on the undercard as a spin-off. This year, Purton, who is well on his way to a third champion jockey title, returns to defend his title won with Southern Legend last year.

When Gray found out the 36-year-old jockey was back, it didn’t take long for Lim’s Cruiser to have a new partner.

After a fairly cosy run in transit in the first half of the race, the Casino Prince six-year-old came out four wide at the 600m, drawing on level terms with the leaders to issue his challenge at the top of the straight, but weakened late to still run a close second to Bold Thruster.

It was a brave effort given he has not raced for five months and there was a seven-kilo pull between the two horses. It will be down to only 1.5kgs in the Lion City Cup because Bold Thruster gets such an allowance in the weight-for-age event.

After taking stock of their options, connections just felt their horse deserved to have the best in the business in their bid for a third Lion City Cup win in a row.

“When we found out Zac was riding the Hong Kong horse in the Kranji Mile, Mr Lim (Siah Mong) and (racing manager) Mick Dittman thought they’d take advantage of that,” said Gray.

“Zac is the champion jockey in Hong Kong. He’s ridden two winners for us when he came here. He also rode Emperor Max to a brave second to Lucky Nine in the KrisFlyer in 2014.

“Mr Lim gave Troy See the opportunity in the last race as he’s their No 1 rider. I can understand that and I don’t blame Troy, but I can also understand why they want to have the best in the world on their horse in a big race.

“So be it. My job is to just keep the horse safe and sound for the races.”

On that score, Gray said that the Rocket Man Sprint run did take something out of the eight-time winner.

“He took a few days to pull through as it was such a hard race, going around runners. His fitness that day must have been really good as he nearly won,” he said.

“He seemed a little tired, but he’s pulled up okay in the end, he’s bounced back.”

Post-Lion City Cup, Gray usually faces the usual issue of finding a suitable race for his champion sprinter on the local scene, but he may be spared that headache at least in the next month.

“We are keen to go as we’ve done it before (Emperor Max ran seventh in the QIPCO British Champions Sprint Stakes over 1200m in 2015). If he runs well in the Lion City Cup and pulls up well, it’s an opportunity not to be missed.”

Please note that the bookings Purton are still subject to the approval from the Singapore Turf Club’s licensing committee. The applications are in progress and a decision will be made shortly.