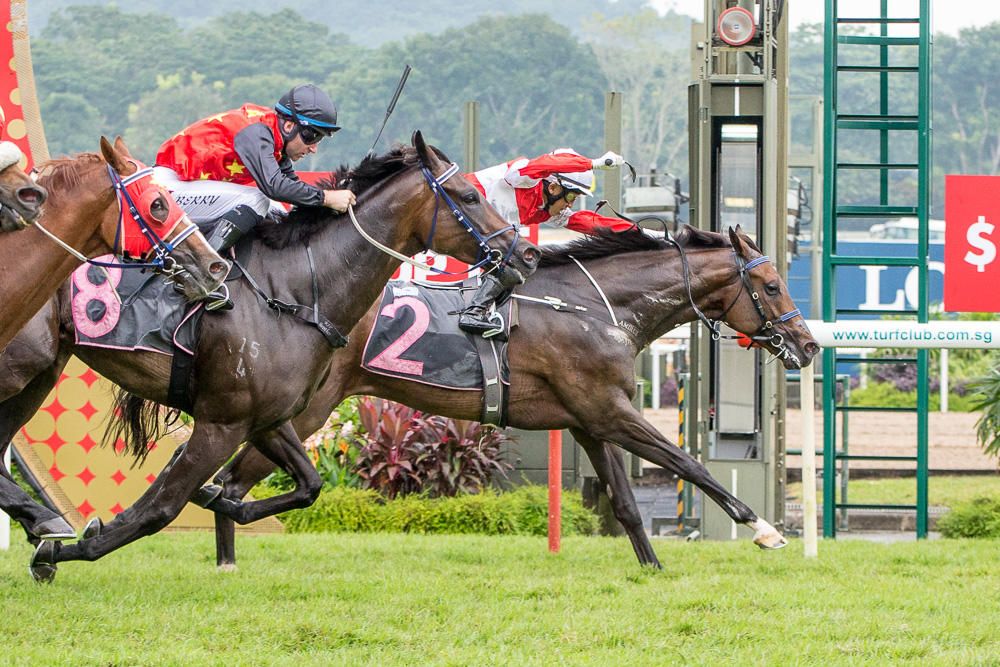 It’s been a long time between drinks for talented apprentice jockey Amirul Ismadi, and the thirst quencher could not have come on a more auspicious occasion than Singapore Derby day.

The brakes had indeed been slammed on the win counter for the Ipoh-born rider since Spur Me On on May 5, but riding Wecando ($43) for his master Stephen Gray in the $70,000 Chase Me 2012 Stakes, a Class 3 race over 1400m on Sunday, he was bouncing back into the winner’s enclosure.

Riding the rails from the start, Amirul bided his time on the previous three-time winner by Per Incanto until the gap pres

The better-fancied China Horse Club pair of Nationality (Tommy Berry) and Karisto (Ben Melham) were still in the vicinity but were not pinging as expected.

Wecando could not ask for more as he kept making a beeline for the post. The China Horse Club duo had a last-ditch attempt but Nationality and Karisto could only settle for the placegetting spots, separated by an identical margin of a half-length each.

“It’s been quite some time since I visited the winner’s circle,” said a relieved Amirul at the lead-in.

“I’m really thankful to the boss and Mr Chen (owner of Wecando) who supports the stable with a couple of good horses.

“Wecando was at his first start in Class 3, I thought it would be a big task for him, but I’m proud of what he has done.

“I really didn’t expect him to run so well. He can progress through his grades.”

Gray, who part-owns Wecando, was pleased as punch his stable apprentice jockey has found the line after such a long drought.

“It was a beautiful ride by Amirul. I’m really pleased for him as he’s had a bit of a lean run,” said the Kiwi handler.

“I told him to just stick at it, stick at it. He’s a good boy and a good rider.

“I was a bit concerned by the step-up in class for the horse. He picked up eight points and was running in a good field, but he won a nice race in the end.”

A last-start winner in a Class 4 Division 2 race over 1400m on June 15, Wecando was bringing up his fourth win in nine outings and more than $165,000 in prizemoney for the Elaine Chen Stable.

ented itself as the weakening leader Crown Gift (Yusoff Fadzli) rolled off at the top of the straight.