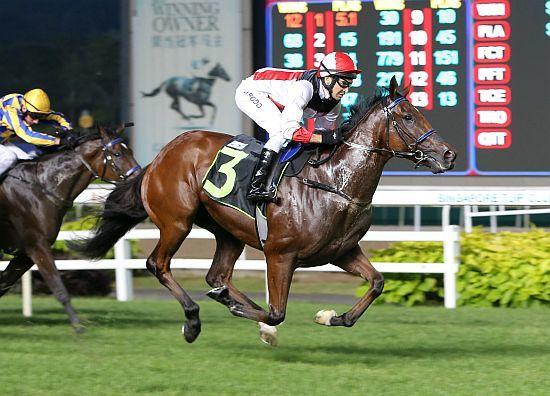 The owner-breeder behind the successful Westfield Farm and Courtco Racing had long toyed with the idea of racing a horse in Singapore with good mate Stephen Gray one day, but never got round to going through with it until the Kiwi trainer recommended that Sepoy yearling to him a few years ago.

Pre-trained in New Zealand before finally arriving at Kranji in June, Cavalla Court as he was named – with the Court common denominator of most of their horses back home – showed a certain level of promise at his first two starts, even though he was a bit of a handful, before getting on the board at his third start.

The win was also Gray’s ice-breaker for the new season, putting a smile on his face after a frustrating run of seconds at the first four meetings.

“It’s nice to finally get a win, especially after we were robbed at least twice with Bear Witness and Trafalgar. Vlad (Duric) rode both and they just couldn’t get a run,” said Gray.

“That’s racing, but what I’m even happier with is that this is a first win for a good family friend of mine, Brian Court.

“Brian is an owner-breeder and businessman from Christchurch and had always wanted to race a horse here with me.

“I saw that yearling who was a half-brother to Lim’s Dashing, a very nice horse I used to train, and Brian said he wanted to buy him. Cavalla Court is the first horse he races with his good friend Robert Famularo.

“He was a bit hotheaded when he first got here but we knew he was a nice horse. Michael (Rodd) gave him a great ride as well.”

The Australian jockey, who was at his second ride on Cavalla Court after he steered him to fourth place second-up in a similar Open Maiden race over 1200m in November, said the contrast in demeanour two months apart was quite amazing.

“He overraced the last time, but I had the perfect run tracking up the leaders, he was cantering tonight,” said Rodd.

“He relaxed beautifully. I got going a bit early, but I also wanted to get away from them.

“He had a bit of a look, pricked his ears, but he won a nice race in the end.”

Gray said a future over more ground wouldn’t be out of the realms of possibility.

“Looking at the way he won tonight, I see why not he wouldn’t get more ground eventually,” he said.

“Owners want to race horses here and they are here for the prizemoney. Even though an Open Maiden is worth only $30,000 now, it’s still better than in New Zealand.

“Unfortunately, Brian and his wife Lesley are on a cruise ship and couldn’t be here tonight, but I’m sure they’ll be thrilled. He did tell me to find him a race in March as he’d be visiting Singapore then.”

After settling handy behind race-leader Coming Up (Juan Paul van der Merwe), Cavalla Court ($38) looked all over the winner when he was angled out for his run down the middle of the home straight.

Favourite Ironclad (Simon Kok Wei Hoong) ran second 1 ½ lengths away, but in all fairness, was probably denied a better finish by his outermost alley in barrier No 13, which forced him on a torrid trip out wide throughout.

Hwasong (John Powell) nearly made it a Gray quinella when he snuck up late but was denied by a short head by Ironclad.