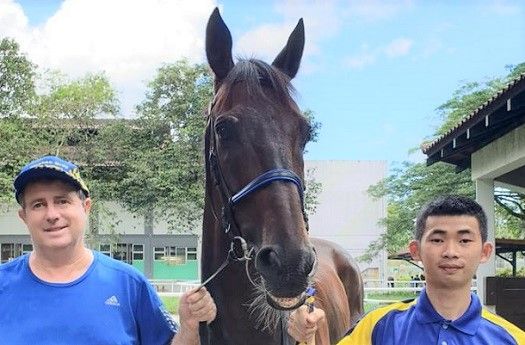 Malaysian apprentice jockey Cheah Wei Wen can finally live out his dream of riding in a Singapore race this Sunday.

After moving down from Kuala Lumpur trainer Richard Lines to join Kranji trainer Stephen Gray back in February, the 19-year-old had already been spotted riding at trackwork and in trials at Kranji, and helping out on racedays – all the usual tours of duty leading up to that imminent baptism of fire.

But an unexpected cataclysm known as COVID-19 threw a spanner in the works, forcing Cheah to hold his fire for a while. Racing – just like, virtually, everywhere else around the world – was stopped on April 7 because of the situation worsening in Singapore.
The Circuit Breaker is still on, but with racing allowed to restart three months later on July 11 as part of the Phase Two easing of restrictions, Cheah was finally given the green light last Friday.

Gray didn’t wait any longer. He right away supported his new kid on the block – who already boasts a record of 13 winners in 1 ½ years of riding in Malaysia – with three rides at this Sunday’s 14-race meeting – Darc Bounty, Billy Britain and Happy Lucky Star.

“I’m very happy I will get to ride this Sunday. It was always my dream to come to Singapore and ride one day,” said Cheah.

“My former boss Mr Richard Lines is a close friend of Mr Gray’s. He rang him up last year, and luckily, he had no apprentice jockey at the time, and that’s how I came over here.

“Malaysia has been good to me, and I really learned a lot there, but it’s a very good opportunity for me to ride in Singapore for Mr Gray. Mr Lines also encouraged me as he believed I would learn more and become more independent if I rode here.

“I arrived in February, and I thought I would get my licence after one or two months, but I was very down when the virus shut racing down.

“I just had to take it, and all I could do is keep riding trackwork, and also on the mechanical horse. I jogged every day to keep my weight around 51kgs.

“I didn’t give up. I’m also lucky (three-time Singapore champion jockey) Vlad Duric helped out at the stables during the lockdown. He gave me a lot of advice.”

Such a rare privilege can certainly go a long way in applying further polish to a budding talent that was discovered and nurtured fairly early.

Born in Penang, Cheah sat on his first horse when he was five. As his mother worked as a secretary to Lines, when he was then based at the Batu Gantung racecourse, Cheah often hung around the stables when he was a kid.

“I rode my first horse, Around The Cape, when I was five. It was at Mr Lines’ stables when he was still in Penang,” said Cheah, who has one sister who is a flying instructor in Langkawi.

“When Mr Lines moved to KL, we joined him there. I was 16, became more involved in racing, and that’s when I knew I wanted to become a jockey.

“My mum didn’t want me to choose that career, but I told her I didn’t want to study anymore. I had made up my mind.

“I was coached by Claudio Greco, a former Australian jockey, and (top Malaysian-based Brazilian jockey) Jose De Souza. My first ride was on Perfect Run (on September 2, 2018) for Mr Lines in KL, and I finished third.

Cheah would hope he would not have to wait as long to taste his first Kranji success, but is above all thankful for the opportunity.

“It’s a very good start with three rides. I thank Mr Gray and the owners for the big support,” he said.

“Darc Bounty is my best chance. If he can get a good jump, he can go forward.

“I work Happy Lucky Star a lot, he’s a pretty big horse who can get a bit keen, while Billy Britain is an old horse who has got more experience than me!”

Gray, who calls Cheah ‘Winston’, for one does not believe in throwing his apprentices over no-hopers just for the sake of getting the lie of the land, even early doors.

“As much as possible, I try to put my kids on horses who can run a bit. They won’t learn anything on slow horses,” said the Kiwi mentor, who is at his 20th season at Kranji.

“I also have two good owners who told me to support the young man, he has to start. They are Mr and Mrs Chen (who own Darc Bounty) and Mr Patrick Lau (Sky Rocket’s owner who also races Happy Lucky Star).

“Winston is a well-mannered kid with great work ethic and was well brought up. Richard recommended him to me and he came at a time when I needed an apprentice to replace Amirul (Ismadi, suspended and licence not renewed).

“I saw his record of 13 winners and many seconds in around 100 rides. It was a very good strike rate, and I took him on trial.

“He’s got good ability. He had ridden in 14 or 15 trials in two weeks, and had caught the eye of the riding coach Matthew Pumpa, and got good support from the Stewards.

“But then, COVID-19 struck and was a complete disaster for everybody. The good news is he got a lot stronger than when he got here.

“To me, Winston’s in a similar mould as (reigning Singapore champion apprentice jockey) Simon Kok (Wei Hoong, who was first indentured to Gray). He looks up to him and they know each other.

“These local boys are going well these days. Matt and Damien (Kinninmont) have done a great job with them. They are the next generation of riders, they’re an asset to racing, and that’s what we need.

“Matt had a good talk with Winston on Friday. He’s keen as mustard, and hopefully, he can have a bit of success here.”

Gray is not ruling out a fairytale start for the three-kilo claimer, but above all else, he just wants his new protégé to settle into his strides first.

“Darc Bounty is pretty good. He’s unbeatable in Class 3, but this is Class 2,” he said.

“He trialled well, he gets in with a light weight at around 50kgs. He can be naughty from the gates, but if he gets a good run, he’ll be there.

“Happy Lucky Star goes all right in his class (Class 5) while Billy will find the Polytrack a bit short, but he’s the right horse to give Winston some confidence.

“Three rides are just nice to get him started. He won’t be freelance so soon, I just want to keep him stable, and hopefully that will get him going.