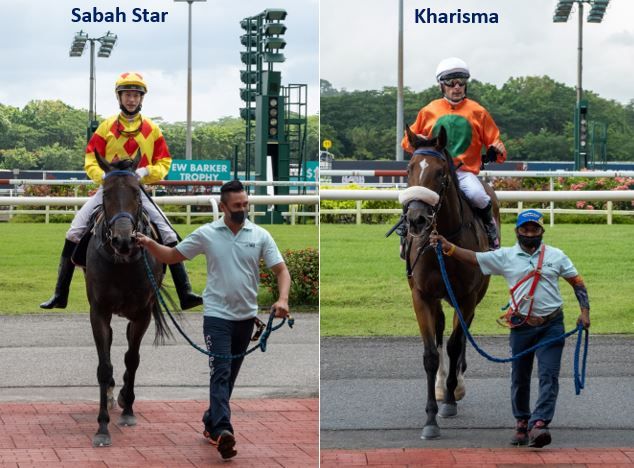 Trainer Stephen Gray was rapt with his early double on Sunday, even if the feat still had a bittersweet taste when he thought about the two owners.

Both Sabah Star and Kharisma, who were at back-to-back wins, are raced by overseas connections, who would normally grace Kranji of their presence when they can, but due to the closure of borders, could only watch their pride and joy win on TV.

“Both owners can’t be here because of the lockdown, but I hope they got some joy in watching their horses win from their homes,” said Gray, who was unwrapping a nice late 56th birthday present through that double, six days after the actual day.

“It’s important for us to win races for these owners as it’s not been easy for them, and us as well. These owners are struggling, but they have been good owners and good supporters through the years.

“Untung has been a good supporter but it’s not been easy for him, and similarly for the Sabah owners, they’re stuck in Sabah, but they continue to support us.”

Again well ridden by Simon Kok Wei Hoong, Sabah Star, a Pins four-year-old, came from well back to score by half-a-length from Super Speed (Ryan Munger) with Clarton Treasure (John Powell) third another half-length away. The winning time was 1min 23.63secs for the 1200m on Polytrack.

“Sabah Star won very well at his last start even though he drew wide. You can’t win like that unless you have some ability,” said Gray.

“He has matured during the COVID-19 break and I always felt he would get the mile. It’s hard to find such races in Class 5 and we took the opportunity to run him in today’s race over 1400m.

“He had a beautiful draw (barrier one) and got a lovely ride from Simon.”

After that second success, Sabah Star has collected around $50,000 in prizemoney for his connections.

Gray was equally effusive of his second winner, a four-year-old by Mossman who had always shown promise from the outset, having now finished out of the placings only twice in eight starts.

With that third win, Kharisma, who was the first emergency starter on Sunday, has already banked in around $130,000 in prizemoney for Joesoef’s Dago Stable.

“I thought that was a nice race for him, but I was surprised he was only the E1 after he won his last race,” said Gray.

“Anyway, he got in and he won. We knew he had a good chance.

“Vlad Duric was supposed to ride him but couldn’t make the weight (55.5kgs) and Marc Lerner did a good job on him.

“He’s won his three races on Polytrack, and seems to like that, but I think he can also run 1400m on grass. He ran good over that course and distance once (fourth to Afalonhro in a Class 4 race on August 16).”