Gray banks on Wisdom saving his best for races 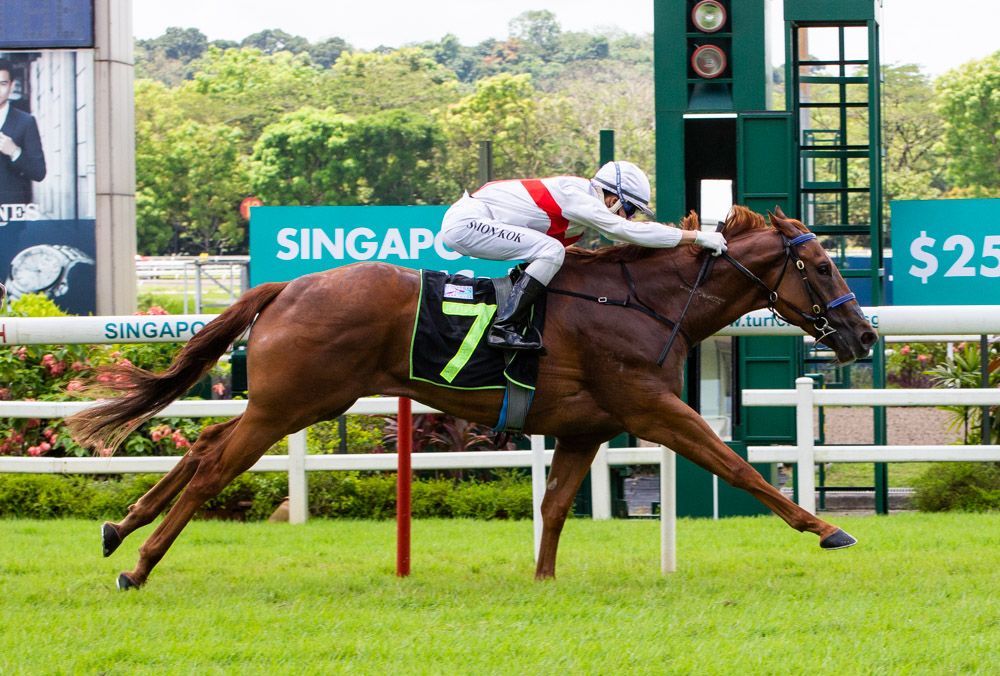 If horses were graded for their work at home, Infinite Wisdom is probably one good example who would barely get a pass mark. But luckily for his connections, the three-year-old chestnut by All Too Hard is a totally different proposition when it matters more – on raceday that is, especially on turf. Following a sterling second to Boomba in the Group 3 Singapore Golden Horseshoe (1200m) on December 5, an assignment in a $75,000 Novice race over 1200m this Saturday should have been a shoo-in, even if other smart three-year-olds like impressive debut winner Starlight and Be You will be in the way, but because of that “split personality”, trainer Stephen Gray remained wary.

“He didn’t trial very well last week, he went terrible – again,” said the Kiwi handler. “Winston (Gray’s apprentice jockey Cheah Wei Wen) rode him. He’s the only one who knows him, other jockeys won’t know what he’s like. “This horse only does what he has to do. Winston told me after he pulled up, he had had enough, that was it. “But that’s the way he is, he’s very laid-back. He’s a tough horse to train as he has his own character and doesn’t do much, but he’s a nice horse on raceday.”

In his lead-up to his Singapore debut in August, the Australian-bred’s listless demeanour was indeed little to go by to suggest he could score first-up. Other than a win that came as his saving grace at the last of his three barrier trials, he had not exactly lit up the mornings at Kranji, but his raw ability took centrestage at his first day at the office. With Simon Kok Wei Hoong up, he led from start for a result that even Gray had more than a few doubts about before the race. “He trialled well in New Zealand, but he was naughty in the gates here,” recalled Gray. “Even (owner) Paul Hickman said he had a donkey after his second trial. But he went back again and he won his trial. “We were still very suspicious how he would go first-up as he was still very green, but he’s a different animal on turf, he doesn’t like the Polytrack.” If the all-weather was one of the reasons for his lack of enthusiasm on the training tracks, he certainly reflected the same resentment in his races, too. At his second start in a Novice race over 1200m on Polytrack, he had every chance from a handy spot off the leader, but eventually faded to fifth place around four lengths off the winner Brutus. Gray was convinced it was just a blip, and he should press on with his main mission coming up next, the Singapore Golden Horseshoe. That was on paper, because on the tracks, Infinite Wisdom’s average work ethic in the morning was showing no signs of improvement, compounded further by an untimely health setback. “I freshened him up after his second run, but three weeks before the Golden Horsehoe, he got quite sick,” said Gray. “He wasn’t well, he had a lot of phlegm and he also had a long coat. His first trial wasn’t good again (distant last), but four days before the race, he trialled again and did a bit better (third to Delaware). “It wasn’t an ideal prep, but he’s still done a good job with Vlad (Duric) to run second in the Golden Horseshoe. He’s a really nice horse.”

Given his handicap of 54.5kgs, which Duric cannot make, Gray wanted to reunite Infinite Wisdom with his only winning partner, Kok, but had to look elsewhere with the Singapore champion apprentice jockey away in Ipoh to be by his ailing grandfather’s bedside. “I couldn’t get Simon as he’s away. Marc Lerner will ride him,” said Gray, who enjoyed a bit of success with the Frenchman towards the end of last season with Kharisma and Sky Rocket. “Marc is a laid-back rider, just like the horse. Perhaps they can click, but they will be running in a pretty strong field. “But the horse looks okay even if he doesn’t show much. Winston galloped him this morning and it was quite good, he’s a lot brighter.”