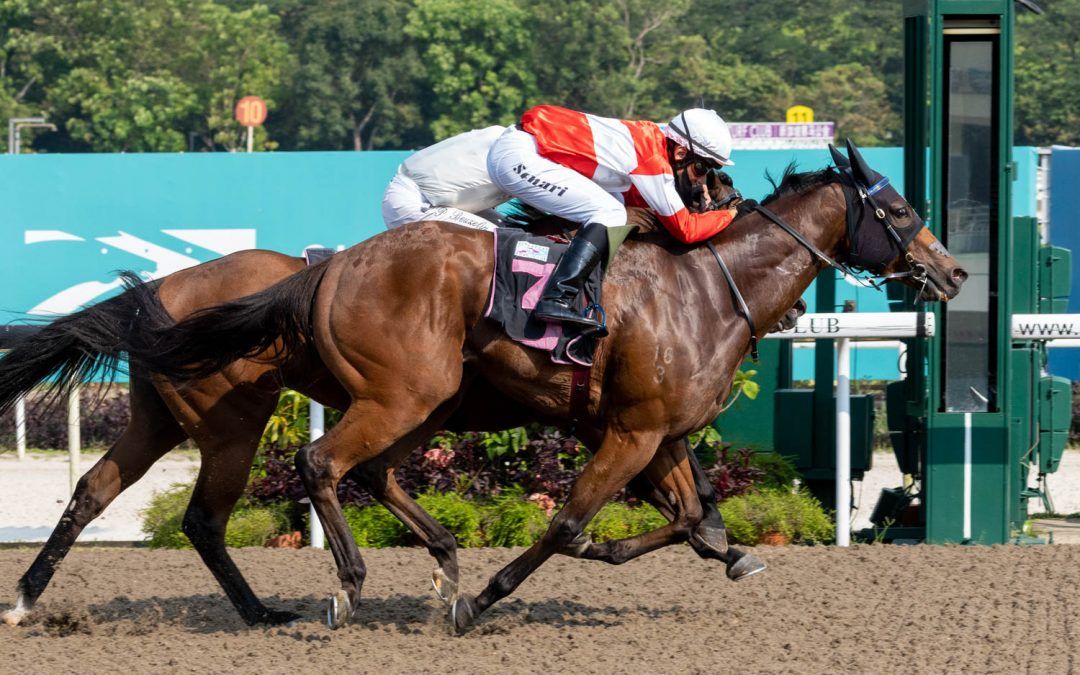 Saturday’s $70,000 Class 3 race over 1100m was replete with top chances like Celavi, Super Invincible or Lim’s Passion, but they were in the end all put to the sword by forgotten horse Darc Bounty.

Winless for almost a year (last visit to the winner’s circle occurred on March 3, 2020), the Darci Brahma seven-year-old enjoyed a charmed run in third place behind the eye-balling pair of Super Invincible (Hakim Kamaruddin) and Celavi (Louis-Philippe Beuzelin) at the head of affairs.

Jockey Noh Senari – who incidentally was the winning partner at Darc Bounty’s last win – must have chuckled to himself when he saw his two main rivals throttling each other into a gut-busting duel, even if his own mount needed to have the engine to run them down – while repelling other challenges from the backmarkers.

Super Invincible, who was having his first start for Mark Walker, was the first to hoist the white flag, but the resuming Celavi looked to have the race shot to pieces when she forged clear at the 250m.

But Noh and $115 shot Darc Bounty were in hot pursuit and chipping away at the gap with every stride. Both riders threw everything bar the sink at their mounts, and it was Darc Bounty who won the verdict by a neck.

Water Rocket (Juan Paul van der Merwe) let down late to run third another two-and-a-half lengths away. Recording the smart time of 1min 4.5secs for the Polytrack 1100m, Darc Bounty was registering his seventh win in 34 starts for stakes that have reached beyond the $385,000 mark for the Elaine Chen Stable.

Winning trainer Stephen Gray said contrary to what the long odds may suggest, he was quite bullish about a forward run from his protégé.

“I knew he would run well today,” he said.

“He trialled well last week (close second to Quadcopter) and he was back to his class. At his last couple of runs, he was caught wide.

“He got a beautiful ride from Noh. The two in front did all the work and he got the suck run from behind.

“Well done to S Noh as he did all the hard work to get down to 56kgs. This horse has a good machine in Class 3, he has got down to the right class.

“At the 200m, I wasn’t sure he was good enough to beat the favourite (Celavi), but he’s a good honest horse.

“It’s great for the Chens who are great supporter of racing. It’s a pity they can’t come down, they should be allowed to come down there to take a photo.”

One person who will no doubt be framing his own photo of Darc Bounty following the major upset is Noh, who certainly needed a nice memento to make up for the hard work in dropping to this weight. The heavyweight but talented rider recalled how Gray sounded doubtful when he assured him he could shed down to the required 56kgs on raceday.

“Stephen asked me three times: ‘Are you sure you can make the weight?’, but I know he needed a strong rider,” said Noh, who now boasts a two-from-two record on Darc Bounty.

“The thing I know about this stable is they never put you on a crazy horse. I didn’t ride this horse in trackwork and all credit must go to (Gray’s apprentice jockey) Winston (Cheah Wei Wen), he did all the hard work and rode him at his last trial, I am just the pilot on raceday.

“He even told Stephen he felt the horse was going really well, and he told me as well.”