Hard Too Think too good at first 2000m test 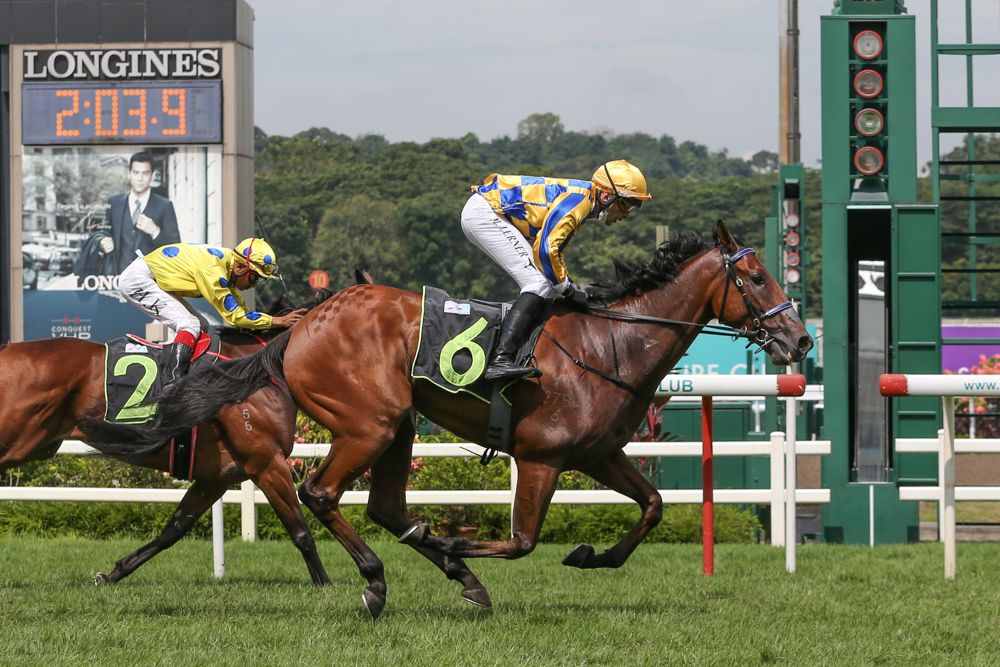 Hard Too Think proved he was a future stayer in the making after a solid win in the $50,000 Class 4 race over 2000m on Saturday.

Trainer Stephen Gray was a happy man after the win, especially as he had always seen a career as such for the son of All Too Hard at Kranji, with the ultimate prize, the Group 1 Singapore Gold Cup (2000m) at the end of the year (November 11) already in his sights.

The Group 1 Singapore Derby (1800m) on July 25 looms as an earlier event the four-year-old is eligible for, but Gray would only be sidetracked into a more testing Weight-for-Age race if Hard Too Think qualifies.

“He could be my Gold Cup horse in November. He proved today he could run 2000m,” said the Kiwi handler.

“As for the Derby, he needs to earn a few more points, there is this one Class 3 race over 1800m, which I suppose he could run in.

“Whether he gets in, it’s the same old story with handicap and Weight-for-Age races. But there are limited options for such races, that’s the problem.

“I’m not sure who will get in the Derby, but I think the competition is not overly strong. Marc (Lerner) also told me today he would like a wet track even better.”

The French jockey delivered a textbook ride on Hard Too Think, taking a nice drop on the eye-balling pair of Twelfth Night (Joseph See) and Star Jack (Troy See) before upping the ante upon straightening.

Hard Too Think duly charged forward down the middle of the track, even if as the archetype stayer, he was more grinder than spectacular inside the last furlong.

Along the rails, Meryl (A’Isisuhairi Kasim) had a crack, but had to settle for second place three parts of a length away. Gray’s second runner King’s Speech (Iskandar Rosman) took third place another 2 ¼ lengths away.

Sent out at $21, Hard Too Think clocked 2min 3.96secs for the 2000m on the Short Course, and was bringing up his third win from nine starts for prizemoney that has hit around the $115,000 mark for a syndicate put together under the Stephen Gray Racing Stable.

“I bought him at the Gold Coast yearling sale and sent him to New Zealand. I syndicated him as a yearling, there weren’t many people on board at first,” said Gray.

“He was shinsore, but they told me not to worry too much as he goes good. He’s now got a good bunch of owners, some new and they’re all excited.

“Unfortunately, they can’t come to the races, but I keep them informed how the horse is doing and how he is progressing.

“I know it’s only a Class 4 race, but he still had to chase down the leader. He had a beautiful run up the fence.

“He’s a progressive horse, and I thought King’s Speech also ran well. He’s a nice horse, he was right up the fence.