Kharisma turns up for another win 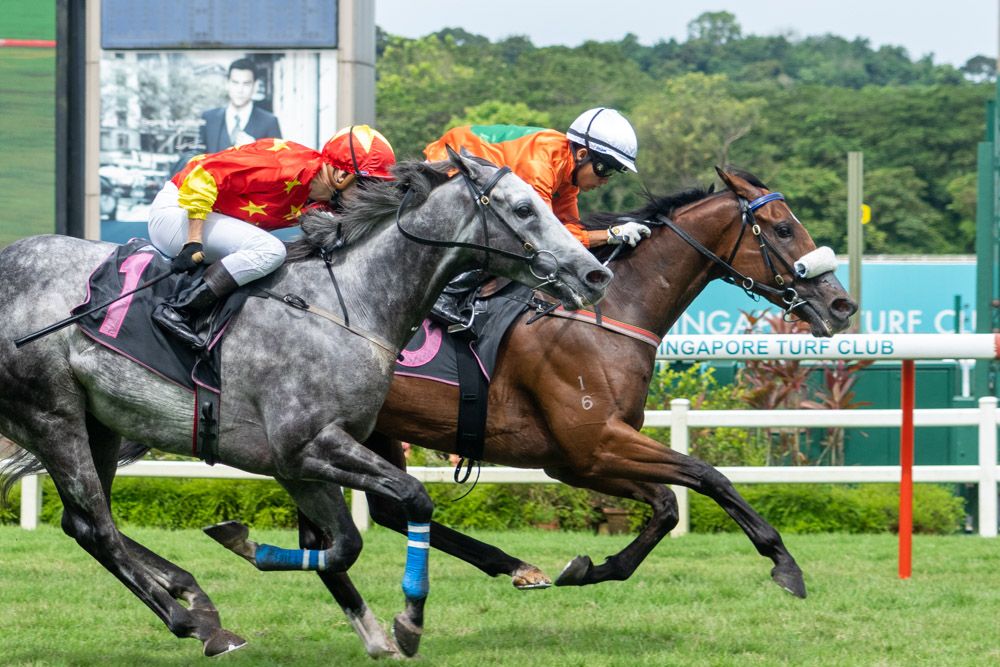 A drop back down to his pet trip saw smart sprinter Kharisma bounce back to his brilliant best on Sunday.

The Mossman five-year-old certainly did not lose any admirers at his first mile test in the Group 2 Stewards’ Cup (1600m) last month when only a 1 ½-length third to Mr Malek, but he was clearly more at home over the shorter 1200m of the $100,000 Kranji Stakes A race.

Well handled by three-kilo claimer Iskandar Rosman from the widest barrier in the small but select 10-horse field, Kharisma got the gun run, one-out, one-back behind the speeding duo of Fame Star (Simon Kok Wei Hoong) and Makkem Lad (Krisna Thangamani) while favourite Grand Koonta (Vlad Duric) was tucked away in the box-seat.

Iskandar made the winning move when he clicked Kharisma up for a cruising run around the fighting pair, but held his fire for a few strides more before turning him loose.

It was a clever piece or riding that killed two birds with one stone – save his mount’s energy for that final burst while keeping Grand Koonta under lock and key on the rails.

When Kharisma let rip inside the last 250m, James Peters’ grey came across heels three abreast. To be fair, he still had enough time to peg the leader back, but Kharisma never stopped, and fell in with a neck to spare from his gallant challenger.

Makkem Lad did a sterling job to still hang on to third place another 2 ¼ lengths away, just fending off the three middle-distance performers of the race. Sacred Croix (Hakim Kamaruddin) finished a touch better to claim fourth place another short head away, a neck from Top Knight (Jerlyn Seow Poh Hui) in fifth place with Kranji Mile winner Minister (Yusoff Fadzli) sixth another neck away.

Fame Star, who began as the second fancy, wilted to finish seventh another half-length away, obviously softened up by Makkem Lad’s pesky presence on his outside for most of the race.

Sent out as the third favourite at $30, Kharisma clocked the 1200m on the Short Course in 1min 10.22secs and has now taken his handy record to eight wins, three seconds and three thirds from 18 starts for stakes earnings that have hit just a tick under the $400,000 mark for Indonesian outfit Dago Stable.

All his previous seven wins were also recorded over six furlongs, with the first four coming on Polytrack. Though Kharisma has now scored an equal amount on grass, winning trainer Stephen Gray for one has not brushed aside the all-weather for his classy sprinter, having already targeted the Group 3 Merlion Trophy (1200m) on November 27 as his next main target, but he has not completely shut the door on another tilt at the mile either.

“They were keen in front and that set it up nicely for him today. Makkem Lad overraced and Vlad’s horse was the horse to beat,” said Gray.

“It was a brilliant ride from young Iskandar. He also listened to the instructions, which was to come across if he could.

“He made full use of his light weight and he used his common sense. He trapped Vlad, who wanted to come out.

“That reminds me of the day he was in that situation when Lim’s Lightning won. Sometimes, the draws can cost you.

“Still, James Peters later told me he didn’t think his horse would have picked us up. My horse had the momentum and got the roll on.

“He had two quiet gallops, and he was fit. The race also had good prizemoney.

“There’s an Open race (Class 1) over 1400m in three weeks’ time. We can have a go at that, then give him a freshen-up before the Merlion Trophy.

“I don’t know about the mile of the (Group 1) Raffles Cup (on September 18). We have to be sensible in whatever we decide.

“This horse just keeps turning up, and he fully deserves to win a Group race one day.”