One G1 at a time: Beasley not Thinking Too Hard 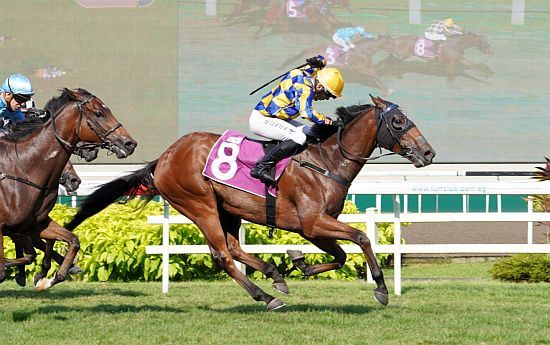 Danny Beasley could be having the best of both worlds as far as this year’s last two big majors in the Singapore racing calendar are concerned.

The Australian jockey is already in the privileged position of partnering likely favourite Lim’s Lightning in the Group 1 Queen Elizabeth II Cup (1800m) in two weeks’ time on October 16.

Straight after Hard Too Think won the Group 1 Singapore Derby (1800m) a couple of months ago, trainer Stephen Gray already knew he’d be in a bit of a bind when the All Too Hard five-year-old’s main mission in the other remaining big race, the $1 million Group 1 Singapore Gold Cup (2000m) comes up on November 14.

Derby-winning jockey Marc Lerner struggles to ride below 53-54kgs, and as much as Gray wants to stay loyal, with Hard Too Think likely to get in at a low weight in the handicap feature – unless he obliterates his rivals in the QEII Cup – he had to search for a senior lightweight jockey.

Beasley was a no-brainer for Plan B – well, almost.

When trainer Daniel Meagher is asked about the chances of Group 1 Lion City Cup (1200m) winner and recent Group 1 Raffles Cup (1600m) winner Lim’s Lightning taking it to the next level in the Gold Cup, the answers tend to lean towards “we’re not going there” although the body language might suggest the door has been left cracked open.

But Beasley was confident he would be free from any Lim’s Lightning commitment after the QEII Cup. Personal experience of the Gold Cup as the graveyard of many past champions has also helped him go out on a limb.

“You never say never, but I think there is a 99% chance Lim’s Lightning won’t run in the Gold Cup,” he said.

“He’s more suited by weight-for-age conditions, a handicap race like the Gold Cup is not ideal, anyway. In the past, we’ve seen so many good horses fail in the Gold Cup because of the top weight they carry, like Better Than Ever and War Affair.

“I was so confident with War Affair after he won the first two Legs (of the Singapore Triple Crown series, then the Kranji Mile and Raffles Cup), but the weight anchored him in the Gold Cup. And we knew he could stay (then 2200m) while Lim’s Lightning is suspect at the trip (now 2000m).

“Steve had already asked me to ride Hard Too Think first-up this Saturday as he knew he’d get a low weight. He also asked me to ride him in the Gold Cup, but Marc still has first call if the horse gets a weight he can ride at.”

Weighted at 52kgs in Saturday’s $100,000 Kranji Stakes A race (1400m) as he returns from his Derby heroics, Hard Too Think will have Beasley up – warming the saddle for Lerner ahead of the QEII Cup, but also as a foretaste of things to come in the Holy Grail.

A few track gallops in recent weeks have also given a good gauge of his Gold Cup-worthiness.

“I galloped him a couple of times in the morning. He’s a very nice quality horse, that’s why he won the Derby,” said Beasley.

“I saw his trial last week (September 21) and he trialled pretty strong (second to Tuesday).

“The 1400m will be short of his best this week, but he will finish well with the light weight.

“I really think he’s a big chance in the Gold Cup, but let’s see how things go along this Saturday first.”

Beasley must be pinching himself when he looks back at the magic carpet ride he’s been on since his surprise comeback from a three-year hiatus earlier this year. Not only plum rides are coming his way, he’s also the lamplighter in the Singapore jockeys’ premiership, albeit second to apprentice jockey Hakim Kamaruddin on the overall standings, and last but not least, two Group 1 silverware already adorn his sideboard this year, with the promise of a third and maybe fourth looking good.

“Lim’s Lightning’s been an absolute revelation. He has come through the run (Raffles Cup) very well, and he looks terrific,” he said as the six-year-old son of Lope De Vega tackles the QEII Cup next.

“He’s a pretty straightforward horse now. I don’t ride him in trackwork, except in his trials, but I know he gets out late every morning, he gets onto the backtrack after 9am.

“He then has a swim and goes straight to his box. He’s got a fixed routine, and he’s thriving on it.

“He looks exactly how he was before the Raffles Cup. He tightened up after his first run from a break, he improved at the second, and after the third, he’s ready to rock and roll.”