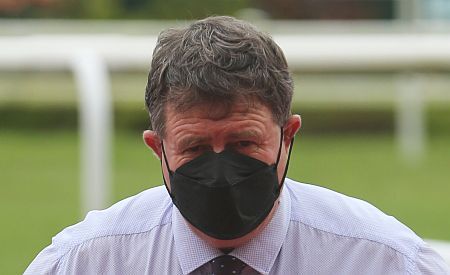 While Billy Elliot, a Per Incanto five-year-old, races in English-born Hickman’s first colours, the familiar St George Stable silks of the red cross on white, St Alwyn is shared with three Singaporean partners under the Villa No 10 Stable.

Both were registering their second wins in lowly $30,000 Class 5 events – Billy Elliot in a 1400m turf and St Alwyn in a Polytrack 1200m – but Gray was still thrilled to bits with the flying start, especially for his good mate.

“Great start, I can go home now!” he joked, knowing full well he can’t with his Singapore Derby hero Hard Too Think making his racing comeback later, among other runners.

“Paul owns the first horse on his own, and the second horse with his poker friends – they’ll be happy! Paul is the longest-standing owner still with me, he’s not had the best horses maybe, but he’s had good winners over the years.

“He’s cut back a bit, and is now sitting on the fence, seeing what happens with racing before he decides what to do. We race a few horses in Australia together, and we’ll see where they end up.”

Of the pair of Hickman winners, Gray picked Billy Elliot as the one with a bit more upside, just wishing that untapped potential had not been impeded by his immaturity.

“The first horse (Billy Elliot) is a nice horse, but has been very hard to deal with. When Vlad won on him first-up, he said he has a lot of ability but boy is he hard work,” he said.

“The horse then went sore on hard ground. At his last start, he got to a mile, but on the heavy track, he got too far back, but Simon (Kok Wei Hoong) told me he gave him a beautiful feel and he was a nice horse. I backed him off after that.

“To me, he’s a good stayer who will get 1600m to 2000m, but mentally, we need to get him right first. He’s a real handful, but Marc has been coming over to ride him every day.

“He’s a hard-going horse, but Marc is a good horseman and a hard worker. He has done a lot of work on him and he has got him to settle down, he really behaves himself now.

“I’m pleased for Marc. I got a lot of nice horses for him, and he’s worked hard on this one.”

The French jockey had to really flex his muscles in the race, too, with Billy Elliot ($20) still spotting the leaders around six lengths when he swung for home the widest, but the gap quickly melted away as he came with a wet sail to down Inherit (Jerlyn Seow Poh Hui) by a neck with Amore Amore (Simon Kok Wei Hoong) third another 1 ¼ lengths away.

Lerner was again at his energetic best aboard St Alwyn ($22), who rocked up like the obvious pick when he was popped off the fence to stake his claim at the top of the straight. The well-supported Malibu Beach (Danny Beasley) was still going hard up against the fence, but St Alwyn powered home to overhaul him and get up by half-a-length.

“I was quite confident of a good run, but when I saw Danny in front after he had a lovely run in front, I thought it’d be tough for my bloke, but he did a top job to pick him up,” said Gray.

“He’s a good horse, he’s a handy horse in this grade. He likes the Polytrack as well.”

St Alwyn has now amassed in excess of $110,000 in stakes earnings for the Villa No 10 Stable, courtesy of two wins as well as his consistent minor placing record of nine seconds and two thirds from 21 starts.