Al Green evergreen as ever 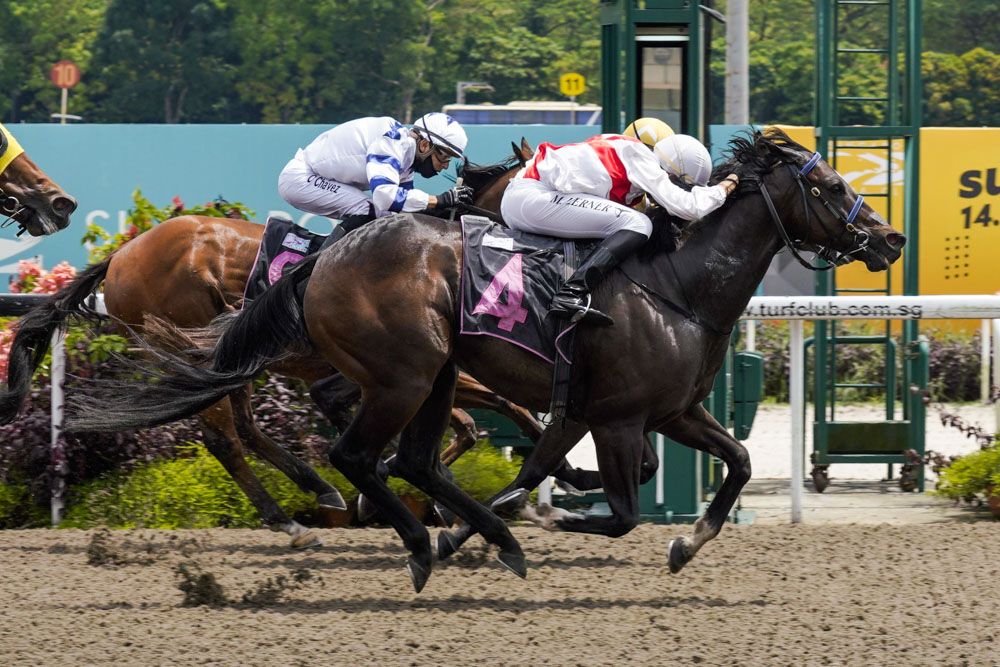 Stephen Gray might have felt a little downcast after his exciting Australian horse Oxley Road didn’t win in Flemington, but a gutsy win from his old marvel Al Green at Kranji did go some way in erasing the disappointment.

Sent out as the favourite in the Group 2 Linlithgow Stakes (1200m) up the Flemington straight on Victoria Derby day, Oxley Road (Blaike McDougall) hit the front early, but looked all at sea as he wobbled around into horses before getting swamped to beat one home, but only 1 ½ lengths off the shock winner, rank outsider Justacanta (Dean Yendall).

Down but not out, around one and a half hours later, Gray, who owns a share in Oxley Road (the famous Singapore road he is named after the obvious giveaway of his strong Singapore connections), was cheering Al Green (Marc Lerner) home in a driving finish to the $50,000 Class 4 Division 2 race over 1000m.

No doubt a Class 4 event is not in the same league as the Linlithgow, an annual race held during the Spring Carnival and worth six times more with its purse of A$300,000, but Gray was in a great mood at the winner’s circle.

Perhaps good news coming after bad news helps bring out some buoyancy. The Kiwi even found a silver lining to Oxley Road’s defeat.

“When he found a gap, he went right through. It’s not easy for an old horse to still be winning in Class 4.

“I don’t know what we do with him now if he gets promoted, but we’ll just enjoy the win. He’s getting older and has his little wear and tear issues, but we’ve looked after him, and he’s been a great horse to us.

“As for Oxley Road, he was left all by himself, he ran to the horses. He should have crossed over and rolled to the inside instead of being stuck out there.

“He didn’t go too bad as that was only his second run at Flemington. That’s okay, he’s a lovely fast horse and is going for a break and looks exciting for next year in the autumn.

“He’s got it all ahead of him, he’s still learning, and that’s all part and parcel of racing.”

A veteran of 54 races across six seasons, Al Green may not be the winningest horse around but the Argentinian-bred nine-year-old son of Exchange Rate boasts a healthy record of six wins and 15 placings for stakes earnings in excess of $400,000 for the St George Stable.

Favourite Qaidoom (Hakim Kamaruddin) had every chance after eye-balling Lonhro Gold (Krisna Thangamani) at the top of the queue. Al Green ($49) who had charted his path right behind the speed in fifth spot was starting to rally at the 250m, but tried as Qaidoom might, she just got outbobbed by her much older rival (six years apart) by a short head.

Arion Success ran third another half-length away. The winning time was 58.81secs for the 1000m on the Polytrack.

Lerner, who is borderline for lightweight rides, had to sweat on the Gold Cup weights to know if he would ride Hard Too Think, but Gray had good tidings for the Frenchman.

“The top weight will be 58kgs which means he will get 52.5kgs. Marc told me he will get down to that weight, it’s all very exciting for him.”