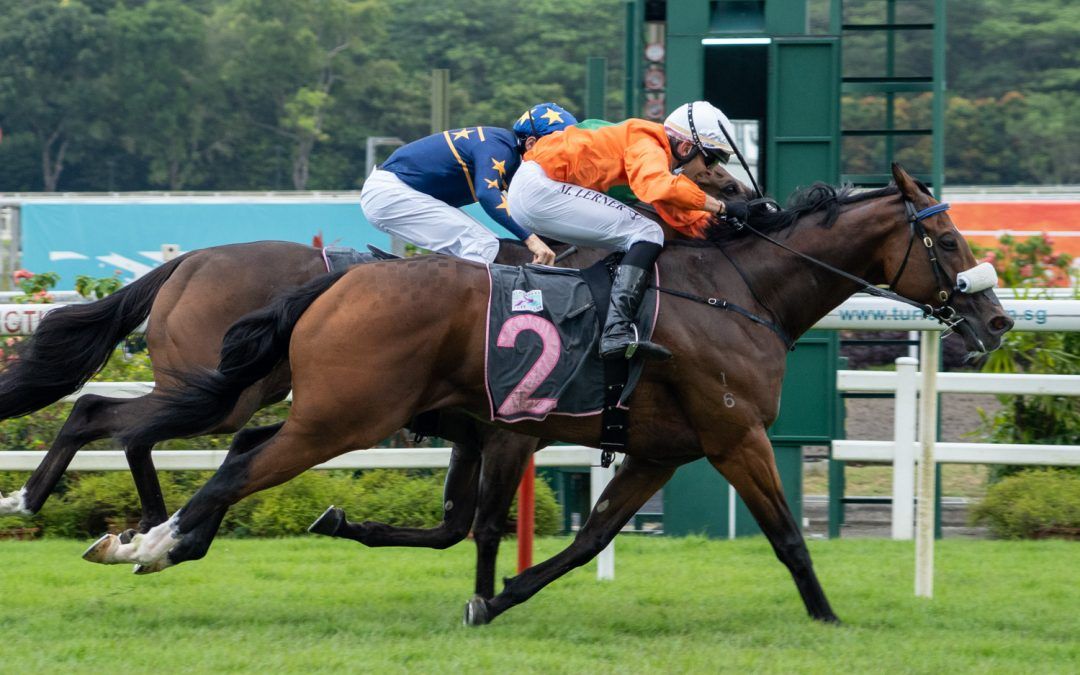 Smart sprinter Kharisma showed he was hard to topple when things go his way, as was the case in Saturday’s main race, the $100,000 Kranji Stakes A race over 1200m.

The gutsy win from a slogging battle with the surprising Lim’s Dream inside the last 300m proved yet again that Kharisma is more effective when racing in closer proximity with the leaders.

The Stephen Gray camp were left a little deflated after their rising star failed to muster when Celavi skipped clear at the top of the straight and made away with the Group 3 Merlion Trophy (1200m) in November, but jockey Marc Lerner said the defeat wasn’t through the Mossman five-year-old’s or anyone’s fault, but just the way the race panned out.

To the French jockey, being shuffled back at the rear from the wide alley did them in. Normally more forward, Kharisma was consequently faced with an uphill task when the speed was turned right on.

From the better gate in three this time, the Indonesian-owned gelding trucked up behind Lim’s Dream (Danny Beasley), not the leader most had foreseen, but who probably landed there by default after noted speedster Makkem Lad (Yusoff Fadzli) blew the start while Celavi (Louis-Philippe Beuzelin), another on-speed runner, went the other way.

Lerner must have been smacking his lips as he got Kharisma ($25) to take a sit on Lim’s Dream’s girth. Makkem Lad railed through down the back in a bid to recover from the tardy getaway, but in his hurry, ran up on the heels of Lim’s Dream, causing him to check.

With Celavi stranded out three wide and under the pump at the rear, the race was already over for Michael Clements’ mare, who was disappointing and ran last, confirming once and for all, turf is not the Polytrack (all seven wins on that surface) specialist’s go.

The yard could still fall back on stablemate and favourite Starlight (Shafrizal Saleh), but as has been the bias for one-batting midfielders all day, the Group 2 Singapore Three-Year-Old Classic winner was also paddling.

Not Kharisma, who was the only one to take the race up to the leader, who tried to raise another gallop when collared, but bravely went down fighting to surrender by a neck on the line.

Grand Koonta (Manoel Nunes, 101), Singapore’s highest-rated galloper after Lim’s Lightning (112), turned in one of his best performances since his second to the same Kharisma last August with a meritorious third place another three lengths away.

Clocking 1min 9.9secs for the 1200m on the Short Course on turf, Kharisma was ringing up win No 10 at his 23rd start, with past six placings helping push his total earnings past the $510,000 mark for the Dago Stable of Indonesian businessman Untung Joesoef.

Assistant-trainer Lisa O’Shea, filling in for Gray who is still in New Zealand on holidays, said Kharisma was a good doer who is among those who have more than earned their oats at the stable.

“We were happy with the way he was going after the break,” said the Kiwi lass.

“He trialled nicely last week, and typical of him, he’s been doing (eating) well. He’s actually been doing too well!

“It can be hard to keep the weight off him, but I guess it’s a good problem to have. He’s a really good doer, which is a good sign.

“At his last start, Marc said the horse jumped well, but he didn’t want him to do too much from the wide gate, and eased him back.

“I think he was a bit lost when he found himself further back than usual as he’s normally handy.

“But I have to say, today, the track has been playing in favour of on-pace runners. Dan Meagher’s horse was very brave, but when our horse went past him, he just kept fighting all the way.”

With Gray coming back on Monday and having to serve an extra 10 days in isolation, O’Shea will be still in charge at the next raceday. She has certainly more than held her own as Gray’s deputy with a decent haul of six winners for the yard.

O’Shea said the boss had delegated to her most of the tasks in the day-to-day running of a stable, but did retain some control, albeit remotely, a working arrangement which has become the new norm these days.

“Steve still has a massive input from over there. I speak to him daily and go through the work list with him,” said ex-Kranji trainer Bruce Marsh’s former senior track rider.

“The responsibilities are about the same, but he also lets me make my own decisions on a few matters.”

Just like the riding part, especially on raceday, is left to Lerner, who has now ridden Kharisma to three of his 10 wins.

“He had a good draw today and he followed the leader everywhere, and was too good. The leader put up a good fight, but Kharisma has such a will to win.

“I hope he can win a Group race one day. We’ll aim him for the Lion City Cup and I hope he can get a ticket.”

Kharisma won’t be at his first stab at the Group 1 Lion City Cup (1200m) as he ran seventh in last year’s renewal won by Lim’s Lightning. Then staged in April, this year’s edition has been pushed to a later timeslot on August 14.