Team Gray hoping to have Kharisma to win big this year 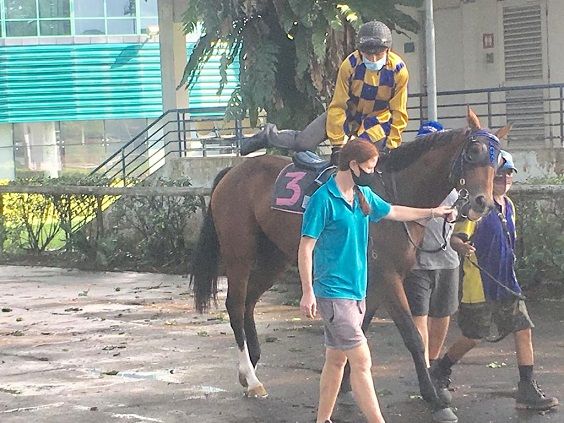 The well-named Kharisma ran a bottler of a barrier trial on Tuesday morning to send a clear signal he may well be a major force to reckon with among the sprinting elite this year.

Already a winner at his seasonal bow in a Kranji Stakes A race (1200m) on January 15, the Mossman five-year-old was indeed an eye-catching epitome of natural sprinting prowess in the way he relaxed right through before chasing the bunny on cue, and finding the line so effortlessly.

Without being really urged along by regular partner Marc Lerner, he came off his stalking spot to draw on level terms with the hard-ridden leader Fame Star (Jerlyn Seow Poh Hui).

So smooth was his action that he looked like he could have hosed up, but Lerner just allowed him to edge past within his own steam enroute towards a soft one-length win.

Trainer Stephen Gray was a happy man at the barrier trials, but said it’s become increasingly tricky to find a race that maps well for the 10-time winner – with the all-1200m haul split two ways between turf and Polytrack – mindful not to anchor him down with too much weight by virtue of his lofty 105 points rating.

The New Zealander has eventually singled out next Saturday week’s Class 1 contest over 1200m on March 19 as the upcoming best option while carefully picking his way to his Holy Grail, the Group 1 Lion City Cup (1200m) on August 14.

“It’s difficult to plan races for him as he’s right on top of the handicap,” said Gray of the Indonesian-owned galloper who has steadily risen from Restricted Maiden grade to the big league in two years.

“He needs to have a run on the way to Group races, the Lion City Cup is five months away. I’ll see how he goes at his first run back, he may then go for a 1400m race or I might freshen him up.”

Kharisma wore visors for the first time, but Gray said it was just a handy option to keep “up his sleeve”.

“The visors were to wake him up today. I may or may not put them on in his race, we’ll see,” he said.

“He handled them very well this morning. I guess we can put them on, sometimes they run good in them, it’s an option we have up our sleeve.

“Look at Dancing Tycoon in the next trial. He’s a hothead, but he’s done a good job and is coming right, Jimmy (Wong Chin Chuen) has done a lot of work on him.

“He’s a nice horse who wants 1400m and further, and he’s another one we put blinkers on today to keep him sharp over 1200m.”

The Written Tycoon four-year-old has two runs under the belt in Open Maiden class, both over six furlongs, living up to his early promise with a gallant win under Wong at his last start on February 13.

As for Lerner, he seemed almost blasé about Kharisma’s superiority at his barrier trial, saying it was in line with the Dago Stable-owned sprinter’s genuine work ethic in the morning, as well as in his races.

“He’s not only a top horse, but he’s also a very good worker, he puts in 100% every time he steps out there. This morning, he worked well and ran a top trial as he always does – he was equal to the task as usual,” said the French jockey.

“He always carries the topweight, and I hope he can win a Group race one day. It would be richly deserved.”