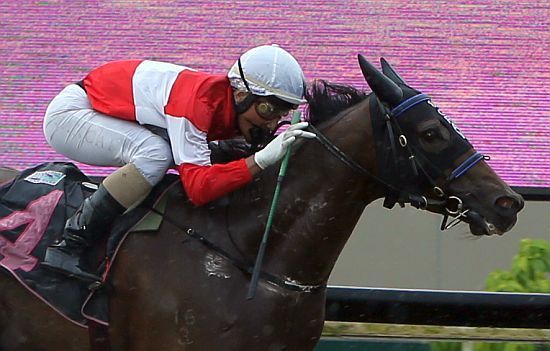 It is safe to say that the Stephen Gray-trained Darc Bounty does not win out of turn.

The now nine-year-old last won in February last year and prior to that, it was in March 2020.

In his defense though, it is tough when you race with such consistency against some of the best horses in Singapore and sometimes you have to wait for the planets to align.

On Sunday, Darc Bounty looks to have found the right race over the right trip and track in the right company and Gray thinks the stable favourite can knock in a well-deserved win in Sunday’s $70,000 Class 3 race over 1000m on the Polytrack.

“He’s honest and that’s his biggest problem as he doesn’t get the opportunity in these types of races often.”

Indeed, apart at his last-start seventh in a Class 3 race on June 18 – where he had excuses not to finish closer – Darc Bounty had been chipping away in Kranji Stakes A or Class 2 company since his last victory; eight starts ago in a Class 3 race over 1100m on February 27 last year.

Remarkably – and in what is a testament to his honesty – his rating remained on 80 points for five starts, courtesy of four placings in some pretty good company over a 13-month period.

“The prizemoney for placing at that level is good too and he’s got great owners (Elaine Chen Stable) and we are patient enough to wait for the right races and he will show his best – he usually does.”

Darc Bounty’s race record currently stands at seven wins and 10 places from 41 starts for over $437,000 in prizemoney and Gray is leaving no stone unturned to increase his winning chances, with top visiting jockey – Blake Shinn – booked.

“I’m good mates with Blake and have been trying to get him on one that can win,” said Gray.

“The young fella (Zyrul Nor Azman) has done nothing wrong and I was very tempted to claim again with the handicapped weight (58.5kgs), but over 1000m, I think a senior jockey can get the job done.”

A quick look through the record books confirmed Gray’s thinking with Glen Boss (twice), Vlad Duric (twice), Noh Senari (twice) and John Powell (once) the only four jockeys to win on the New Zealand-bred son of Darci Brahma.

“And he’s a tough horse to ride – he can be tricky out of the gates like he was last start – but no one better than Blake on him. (Owners) Mr and Mrs Chen were also more than happy to have him on,” he shared.

“If he gets away clean, he will be right in this.”

Like most horses, Darc Bounty had his issues and since he started his career as a two-year-old back in July 2016 for trainer Leslie Khoo, it’s been a long road for the gelding.

“He had a crack in his pastern back in 2019, so to do what he’s doing at his age at a good level is a terrific effort,” said Gray.

“Not too many bad races from him – he’s a grand old horse to be still giving his all every time he goes out.

“He’s not a big horse either but super consistent and as a trainer you can’t ask more than that – very proud of him.”

Gray had one eye on the trials this morning with his best sprinter – Kharisma – having a vital hit-out prior to his tilt at the $300,000 Group 1 Lion City Cup (1200m) next Sunday.

“It’s been tough for him at the handicaps of late so we are really looking forward to the Lion City Cup at weight-for-age,” said Gray of his 10-time winner.

“He will go in fresh which is fine given he’s probably more of a 1400m horse at the moment.

“(Jockey) Marc (Lerner) will ride him and he’s one of the proven horses at this level, so we are looking forward to the Lion City (Cup).”