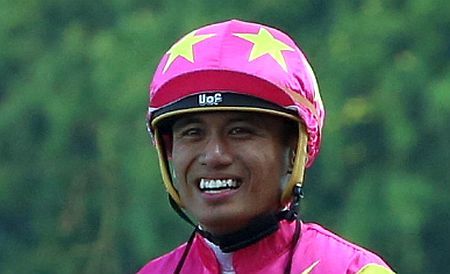 Apprentice jockey Fahmi Rosman burst into tears of joy right after Silent Is Gold handed him a long-awaited first win in the $50,000 Class 4 race (1200m) on Saturday.

The 26-year-old Singaporean, who joined trainer Daniel Meagher’s yard about two years ago, received his apprentice jockey’s licence in January, but he only made his debut on Webster five months later on June 11, where he ran second to Stenmark.

The promising apprentice jockey has since went on to record two more seconds and five thirds from 11 rides and his patience paid off after his first winner came in the form of Silent Is Gold in the Lucky Last.

After bouncing out from the outermost barrier 12 (drawn 16 but down to 12 after four Emergency Acceptors were scratched), Fahmi scrubbed up the fleet-footed Silent Is Gold ($17) to be up front, but the lead was overtaken by Last Samurai (Bernardo Pinheiro) at the 700m.

Despite that, Fahmi did not panic. He pushed the button on Silent Is Gold at the 350m and the four-year-old son of Star Turn began to draw away from the weakening leader.

The Stephen Gray-trained gelding held a one-length victory over Last Samurai, who hung on well to beat the fast-finishing favourite Pacific Star (Manoel Nunes) by a short head into third.

An emotional Fahmi gave Meagher a bear hug after the race and accepted congratulatory handshakes from Gray and his wife, Bridget.

The young rider heaved a huge sigh of relief, more so after he overcame a ligament tear and knee replacement surgery to claim his first career win.

“It’s so overwhelming. I cried because I’m too happy,” said Fahmi, who had two other rides in Lim’s Wish (second) and Hwasong (unplaced) on Saturday.

“I was supposed to start riding in the races in January, but I fell off a horse and tore the ligament on my right knee.

“It doesn’t help that I already had a right knee injury in 2013 before I did my National Service, so I had to undergo a knee reconstruction surgery.

“It took me three months to come back to work, and my boss (Daniel) told me to take the time I needed for it to fully heal. I did only light work before I slowly got my strength back. Now, my knee is all good.

“Daniel sits me down and we talked about my races and trial rides. He has been putting me on very good chances, like Lim’s Wish. I was a bit disappointed that Lim’s Wish ran second, he’s big-hearted but (winner) Outfit came flying home.

“Danny has also been a huge help at the stable and he is a role model for me.”

Fahmi’s heeded Saimee’s advice before the race and his handy ride aboard Silent Is Gold paid off.

“I was a bit more nervous because he’s a good chance,” he said.

“I rode two trials on him. He needed the first one (ran fourth on August 30) and he was fit for the second one (ran second on September 13) coming into this race.

“Saimee explained to me that he has the gate speed and told me to trust his ability and then give him the best chance to finish strongly in the last 400m.

“He’s easy to ride. I gave him a breather midrace and he finished off very well.

“With the first winner out of the way, I am more confident and I hope to ride more winners.”

An elated Gray also gave Fahmi a pat on his shoulder after the race.

“He’s doing very well and he tries very hard, so we have to give this boy a chance,” he said.

“Now, this boy has done a good job and he deserves this win.

“He’s got four kilos off his back, and though we were worried about the barrier draw, we trusted the horse and told him to be positive.

“Saimee has always been very supportive of the apprentice jockeys and it’s great. This is what racing is about!”

He was then inspired to become a jockey after seeing the now-retired Noh ride at Kranji in 2011.

“My parents used to go to the Bukit Timah racecourse and my mum’s older brother worked as a syce there,” said Fahmi, who has an elder brother and sister.

“I was very young when I happened to see Saimee, who’s our family friend, win on Ouzo in the SIA Cup on TV. Back then, my cousins and relatives gathered at my place to watch the big race.

“My dad used to tell me about racing and how good Saimee was as a jockey. At 15, I saw Noh, who was my senior in Greenridge Secondary (School), riding well.

“I weighed only 51kgs then, so I thought to give it a try one day. I completed my National Service after ‘N’ levels and I rang up Saimee to ask for a job in racing in 2015. A year later, I joined Steven Burridge as a syce.

“My family have always been very supportive of my job, so I’m glad to get a winner for them too.”

With three wins and two placings in seven starts, Silent Is Gold has amassed close to $130,000 in prizemoney for the Buddy Buddy Stable.