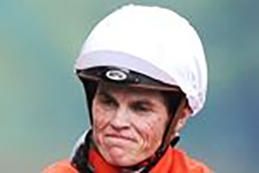 Last year’s Melbourne champion jockey was drafted in by trainer Stephen Gray specially to ride Bahana in the time-honoured showpiece, mainly by virtue of the Elusive City five-year-old’s lightweight of 50.5kgs which regular partner Vlad Duric could not make.

It proved to be a masterly stroke as Williams, who found little joy earlier at his first five rides, duly made every dollar of his air-ticket count aboard Gray’s emerging stayer in the race that mattered. 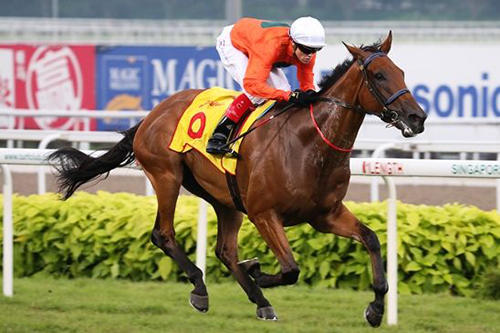 Bahana (Craig Williams) is eased close to the line as he gallops away with the Dester Singapore Gold Cup.

Jumping from the widest barrier in 12, Bahana was given an early rev-vup by Williams to whip around the field as they went searching for the lead from Time Odyssey (Oscar Chavez) round the first turn.

It took 400m for the Indonesian-owned gelding to settle onto the steel, but at no point did he bust his guts to get there. That was half the battle won for the second favourite ($21) as from that point onwards, Williams just put him to sleep.

The Australian hoop did not throw out the anchors outright, though, but gradually throttled down the pace to a steady gallop. Time Odyssey, who, at first, took a tow about two lengths behind, found himself sliding right up onto Bahana’s heels as the pace dropped right off at the 1200m, with the rest of the field also bunching up.

Coming off the backstraight, Chavez decided to pop off the fence to serve it up to Bahana, but Williams had anticipated the move before the Panamanian jockey. Showing superb tactical nous, Williams had cranked up the tempo from the 900m, with the obvious intention of taking the race by the scruff of the neck while testing the other 11 runners’ stamina.

Time Odyssey was the only one who seemed to have not been caught napping as he was the first to react to the sudden upped tempo, as Williams even gave a few cracks of the whip before the home turn.

Spread right across the track as the field straightened up, the chase was on, but it had been left too late, and the backmarkers were soon either chipping away at a lost cause, or just chasing shadows.

After being smothered behind runners, favourite Mr Spielberg was angled out for his run from the 800m, but it was clear soon afterwards, he was facing a mammoth task off the muddling-run race. Ditto for Quechua (Barend Vorster), Majestic Moments (Nooresh Juglall) and Laughing Gravy (Michael Rodd) who were all doing their best work at the finish, but so was Bahana, who had actually shot clear at the head of affairs.

At the 100m, Time Odyssey kept pinning his ears back and gave the impression he still had a late rally left up his sleeve, as did his stablemate Majestic Moments, but it was to no avail as they could only plod home, bettered by not necessarily the best stayer on the day, but definitely snookered by a wily rider named Williams.

Time Odyssey hung on gamely for second place another 1 ½ lengths away while Blue Swede (Matthew Kellady) jumped out of the ground late to land a surprising third place another neck away. The winning time was 2min 17.42secs for the 2200m on the Long Course, almost four seconds slower than the course record set two years ago in the El Dorado Classic by Quechua, who incidentally ran fifth this time.

Gray was pinching himself as he tried to come to terms with the sudden realisation he had just scooped up a unique EW Barker Trophy-Dester Singapore Gold Cup double over the weekend.

The New Zealander claimed the $350,000 Group 2 EW Barker Trophy (1400m) with Lim’s Cruiser on Friday night, but one is never enough it would seem. He came back for seconds and he got an even bigger catch.

While Gray has won the EW Barker Trophy before – famously on his 50th birthday with Born To Fly – in 2014, he was at his first time laying his hands on the Holy Grail of Singapore racing since relocating at Kranji in 2000.

To the son of respected New Zealand trainer Kevin, it has been a long slog, sometimes more a labour of love, but Sunday’s amazing feat was a well-deserved crowning moment through dint of hard work in the last 16 years.

“Bridget and myself came here with only 16 horses and we worked for nothing,” said Gray.

“But we’ve worked so bloody hard, some years we battled, but we’ve enjoyed a good run, and then we won our first Singapore Derby (Lim’s Prestige in 2007).

“This is why we wake up at 5am every morning. Horses like Bahana and Lim’s Cruiser make it all worth it, and I’m lucky to also have great owners supporting me.

“Mr Lim Siah Mong gave me my first Derby and now he’s given me another Group win (Lim’s Cruiser). They bring so much to racing and they also sponsor the Gold Cup now!

“But Untung (Joesoef of Dago Stable), he’s such a lovely man. He’s from Indonesia and is a muslim, but he doesn’t gamble or drink, he only loves horses and the game, and today he’s brought his friends from Indonesia to celebrate that win. That’s what racing is all about at times, the people and their love for horses.

“There are so many good trainers here and they all had their turns – and today was my turn.

“I also have to thank Garry Carvell, my bloodstock agent, as he’s bought both Bahana and Lim’s Cruiser. And I’m lucky to have great staff, my two assistant-trainers Peter Hutton and Nick Selvan, and the boys, they’ve all worked hard during this pressure week while I was away in New Zealand.

“I just wanted to keep it simple and sometimes it just happens. He will go for a break and when he comes back, I will place him through the handicaps and then set him again for a second Cup next year.

“It hasn’t sunk in I won both feature races this week. I’ve been crook since New Zealand, but it will be a big night tonight and my flu will go!” 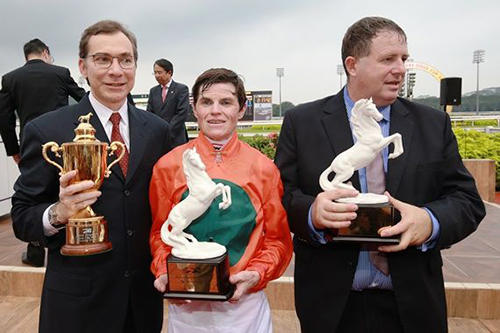 If there was one more person that Gray made sure he did not forget in his thanksgiving speech, it was Duric, who often rides Bahana and was aboard at their success in the lead-up race, the Group 3 El Dorado Classic (2200m) three weeks ago.

“Vlad has kept riding Bahana in trackwork even though he couldn’t make the weight for the race, and rode Mr Spielberg (who ran eighth) instead,” he said.

“Vlad and Craig Williams are good friends and he is the one who told me to put Craig on. He told Craig Bahana was hard to get past when he goes forward.

“I did tell Craig to go forward but for the rest, I left it to him. It’s either you’re a hero or a zero, but Craig rode a brilliant tactical race and he’s really shown his class today.

“He put the pressure at the right time, and the horse just kept going. He’s a great rider and the 50.5kgs also helped.”

The man widely renowned for his consummate professionalism wherever he goes, be it a provincial at Bendigo or to Group 1 races all over the world, from England, Dubai, Japan, Hong Kong or Singapore, stayed humble even after landing his first feature win in Singapore (he has been at a few similar hit-and-run visits before and scored twice in supporting races), but was grateful for the opportunity afforded by Gray, though his good friend Duric.

“It’s my good friend Vlad who told me about that lightweight ride in the Gold Cup when he came to Melbourne to ride during the Spring Carnival,” said Williams.

“I watched all the replays of his races and walked the track this morning. Vlad, who has ridden him in the last three weeks, has also told me what type of horse he is.

“The horse has never been in front before, but it was too good an opportunity not to lead when he jumped so well and landed there. “He’s a lazy horse and still doesn’t quite know what he’s doing, but I tried to get him going, teach him to be strong in front and it’s worked out well. I didn’t want the others to come to me and that’s why I went early with him, he had to make the others run and chase him.

“Just before the home turn, I gave him a few reminders to wake him up and he just kept going. It was a great training feat from Steve.”

A relative newcomer to Singapore racing, Untung Joesoef choked with emotion as he walked down with his entourage to lead in his prized asset to a most rousing reception.

“My dream has come true. Bahana means loud noise in Bahasa Indonesian and he sure made some noise today!”

And some dough, too. With that seventh win from 13 starts, Bahana has now seen his account bulge by another $700,000 to tip over the one million mark.