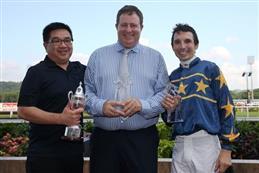 Six furlongs is not really Lim’s Cruiser’s cup of tea, but punters still liked the resuming miler’s chances for a first-up win in the $200,000 Group 3 Rocket Man Sprint (1200m) – and they proved to be right on the money.

Sent out as the $23 favourite in a very open field made up of proven sprinters like Speedy Dragon, Aramco, Nova Strike and Hip Hip Hooray to name a few, the Casino Prince four-year-old again showcased the engine he had under his ribcage to let rip inside the last 200m for a most breathtaking win, but for the first two-thirds of the race, he looked like he had the task ahead.

Ridden for the first time by Danny Beasley, with regular partner Vlad Duric unable to make the weight of 52.5kgs, Lim’s Cruiser dropped back to last upon settling, with noted backmarker Cavallo (John Sundradas) as his rearward travelling companion. 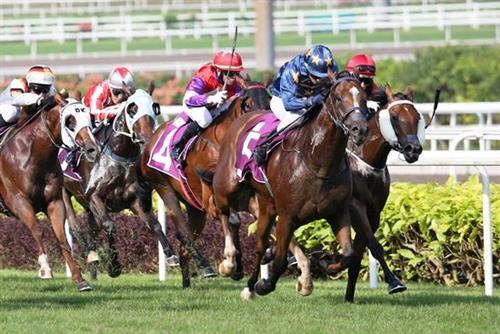 These two horses would, however, turn out to be the pair to fight out the finish at the other end of the race later.

After rounding up the field from the 800m, Cavallo just took off the moment he straightened up with the winning post in his sights.

Lim’s Cruiser was a lot less conspicuous in his manoeuvres after Beasley daringly elected to live on a wing and a prayer back on the inside. Taking the shortcuts home is fine in horse racing, but not quite when a thicket of horses lay ahead like speed bumps.

But Lim’s Cruiser, who captured the Group 2 EW Barker Trophy (1400m) at his last run in November after sweating on rails run under Karis Teetan, again burst clear once he saw a sliver of daylight.

Champion trainer Alwin Tan must have thought Cavallo would etch his name as the winner of the brand new Rocket Man Sprint (ex-Kranji Sprint till this year), but Lim’s Cruiser snuck up on his inside to pip him by a head.

Longshot Rafaello (Nooresh Juglall) and Aramco (Matthew Kellady) fought for third place another 1 ½ lengths away, but it was the former who got the verdict by half-a-length. The winning time was 1min 8.98secs for the 1200m on the Short Course.

The win handed Gray a second consecutive win in the second Leg of the Singapore Sprint Series after landing the last Kranji Sprint with Emperor Max last year. The Kiwi handler said the get-back strategy was a decision made based on the speedmap of the race. 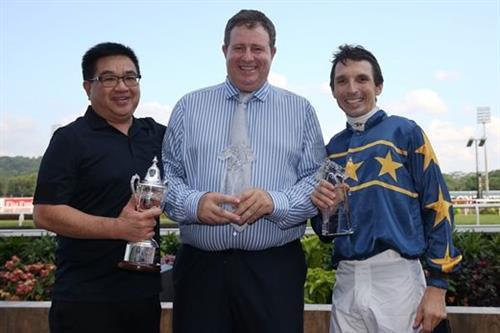 “We knew that the pace would be strong. The idea was to ride him quiet, and pray for a bit of luck, Danny was patient and got the run through,” said Gray.

“He’s a bit special this fella! He might be a bit different to most. This fella could get a mile, I think.

“He had a good weight, a lovely prep and Dan rode him for luck and got the luck.

“We will go for the Singapore four-year-old series as he’s not really a sprinter.”

Beasley said he was just lucky to be the one steering Lim’s Cruiser at Sunday’s ‘black type’ win. To him, it all came down to being blessed a few pounds lighter than his fellow jockey Duric, and nothing to do with skills.

He even said that though he was well aware of his credentials, he was personally not all that confident of a win ahead of the race.

“All credit to Stephen and his team and Vlad, who normally rides him but unfortunately, he didn’t hit Vlad’s weight,” said Beasley. “He would have taken the ride and got the job done.

“I haven’t had much to do with him. I worked him on Tuesday and he didn’t give me much of a feel to tell you the truth; he was pretty lacklustre.

“I said to Mick Dittman (Lim’s Stable’s racing manager) that I can’t remember going to the line as fast in the last 100 metres!

“Without getting too caught up in the moment, this is a bloody serious horse this fella!”

Lim’s Cruiser has now brought his handy record to five wins and three placings from eight starts past the $430,000 mark for the Lim’s Stable.