GRAY TRIO OUT TO TEST THEIR STAMINA

Trainer Stephen Gray is always on the lookout for a good staying race, and whenever one pops up on the programme, he would try his best to enter a few.

It was no surprise to then see the Kiwi handler gang-tackle Sunday’s 80,000 Japan Racing Association Trophy over 2200m, a Kranji Stakes C event, with three runners – Kate’s Keeper, Taramea and City Of Kirkwall, taking almost one-third of the 10-horse field.

The first two are owned by his stalwart owner Paul Hickman of St George Stable while the third one is raced by brothers Gary and Wayne Crispe, also long-time clients with Gray. 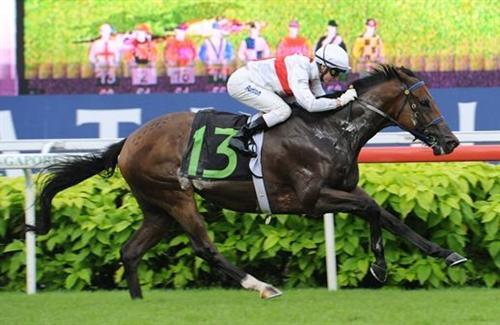 Kate’s Keeper will spearhead a three-horse team for trainer Stephen Gray in the JRA Trophy on Sunday.

That will now be done on Sunday, and in one hit in the same race. The result will then serve as a yardstick for anything more ambitious down the road – like a gilt-edged Cup in November for instance, a trophy which happens to be sitting on his mantelpiece by the same token.

“Kate’s Keeper is probably the one with the better form at the moment. I’ve always thought he was a good natural stayer, and he’s ready for it,” said Gray.

“He had two knee surgeries and it took a while to get him back. I even thought of last year’s Gold Cup for him, but we had to get up in distance and get his ratings up first.

“Taramea will also stay and it’s also a good race to try him on. I also had the Cup races in mind for him, but he had to compete at a higher level and over more ground to make it.

“I’m not sure how he will go, but he’s been coming along well this term, and let’s hope he runs a good race on Sunday.”

As another hint as to where his preference lay, stable jockey and current leading jockey Vlad Duric will ride Kate’s Keeper, a Keeper seven-year-old whose last two of his five wins have come over 1800m, while Taramea, a five-year-old by Mastercraftsman who also boasts five wins, four of them up to 1600m, has been handed for the first time to Michael Rodd.

Rodd who recently returned from a fruitless trip in Dubai is currently one win behind Duric (19 versus 18) on the Singapore jockey’s premiership, but with a superior strike rate of 21% to Duric’s 16%, due mainly to the fact Rodd rides a lot heavier and does not command as big a book of rides.

Alan Munro takes the ride on City Of Kirkwall for the first time. Gray is not ruling out a fifth win from the Pentire six-year-old, whose previous four wins include three over 2000m, 2200m and 2400m, even if he is not as well-in on weights.

“Even if he is out of the handicap, he stays the journey and you’ve got to try.”

The feature race Gray would ultimately aim for his trio is the $1.35 million Group 1 Dester Singapore Gold Cup (2200m) which he won last year with Bahana, but they would have to earn their stripes and their oats first in Sunday’s 2200m race.