On any given day, a pulverising win like the one posted by Lim’s Cruiser in the $800,000 Group 1 Lion City Cup (1200m) would have made any trainer feel on top of the world, but Stephen Gray was, however, not really jubilating at the winner’s circle.

Don’t get us wrong, the New Zealand handler always felt Lim’s Cruiser was something out of the box from the very first day he laid eyes on him, and nothing could make him feel any prouder after that latest feather to his cap.

Last year, the Casino Prince four-year-old lived up to his exciting prospect tag with a first ‘black type’ win in the Group 2 EW Barker Trophy (1400m). 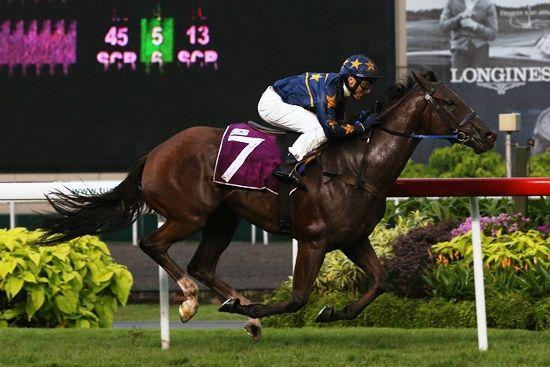 Lim’s Cruiser (Danny Beasley) runs his rivals off their feet in the Lion City Cup.


And this prep, to see him reign supreme in the country’s richest sprint race, three weeks after capturing the Group 3 Rocket Man Sprint (1200m), the first Leg of the Singapore Sprint Series, first-up was the stuff any trainer’s wildest dreams would be made of.

But not quite for Gray on that emotionally-mixed Easter Sunday, though.

If anything, the 52-year-old was not sure if he should pinch himself. On the flip side of what bizarrely looked like two parallel worlds, he wished he could wake up from a nightmare which was somewhat amazingly taking place concurrently with the fairytale.

Emperor Max, for a long time his undisputed stable star, even his first passport to overseas glory (Royal Ascot in 2015), was making his much-awaited racing comeback one year after his last run, which happened to be in last year’s Lion City Cup when a gallant second to Zac Spirit.

While Lim’s Cruiser was careering away in the wet track to a most emphatic win under Danny Beasley, Emperor Max (Michael Rodd), who was still punted down to $15 favouritism despite his protracted absence, suddenly hit a brickwall at the 200m after fighting for the lead with Wimbledon (Vlad Duric) for most of the race.

The Holy Roman Emperor seven-year-old quickly lost ground before being eased out of the race, beating only one home, Hip Hip Hooray.

Gray was not even looking towards the winner inside the last 50m of the race. Where Lim’s Cruiser ($19) would finish was already a foregone conclusion when Beasley pointed him towards the winning post at the top of the straight after coming off the softest of runs in transit.

Quickly jumping out of his seat, Gray scurried towards the unsaddling enclosure where Rodd was walking Emperor Max back to, fearing the worst after he saw his champion stop in his tracks and quickly disappear out of the race – a foreboding sign that normally tells only one sorry tale, especially as Emperor Max does have a history of bleeding.

Known as a man who wears his heart on his sleeve whenever his horses win, Gray came back shoulders drooped, under the unrelenting drizzle, a body language in sharp contrast to the buoyant mood that should be prevailing after such a resounding triumph in one of Singapore’s most iconic races.

It was just downright gut-wrenching to see a trainer who should be doing cartwheels by now, walking back to the winner’s circle with heavy steps and a heavy heart. He had just felt the ups and downs of racing in one race in the space of just over a minute.

Struggling to find his words, Gray, who was at his first Lion City Cup win in 18 years of training at Kranji, still managed to compose himself and conjure up one of the most fitting and at the same time dignified post-win declarations ever heard.

“It’s very sad. I really don’t know what to say,” he began, obviously trying his best to overshadow the sombre atmosphere with a positive spin.

“Lim’s Cruiser is the next best thing, he’s got gears and I’ve said from the beginning he was special. He’s a good horse, has a great future, his turn of foot is amazing.

“But what happened to Max is just heart-breaking. It was my worst fear for Max, to see him get beat today when he’s done so much for us, and for him to bleed was something I didn’t even want to think about.

Pausing to recollect his thoughts, Gray was still able to sum up this surreal situation the best, and in a bid to beat the blues, give some reassuring news to Emperor Max’s legion of fans.

“I’m very sad for Gordon (Yau) and his family. They’re here and it’s very hard for them.

“But even if Max bled, we’ll fix him up and he will be okay. We had already agreed before the race if things don’t work out, he would be retired and that’s it, he’s run his last race.

“We will send him back to Melbourne where he was born. He deserves a good retirement.” 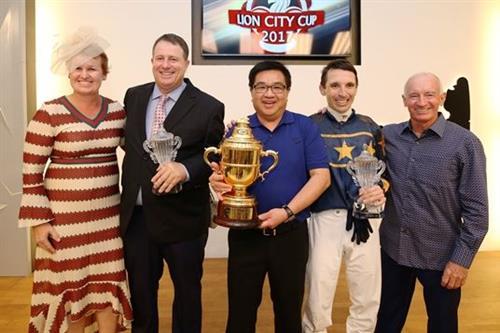 Though devastated, and still battling to grapple with that most bittersweet outcome, Gray was still able to pluck up enough fortitude – and a smile – to bestow upon Lim’s Cruiser his well-deserved accolades at the Champagne Room. After all, he won and it’s all honours to him.

“He’s by Casino Prince, and they like a bit of give in the track,” he said.

“He went right through it very well from the start. He’s very special and well done to Mr Lim (Siah Mong), they will have a lot of fun with this horse.

“After he won the Rocket Man Sprint, I thought long and hard about running him in the Lion City Cup, but he was going so well that we took a punt, and he’s proven us right. It’s the right prep towards the 4YO series.”

It still has not quite sunk in for Beasley that he got on while waiting for the main course, and Lim’s Cruiser has knocked in two Group wins as a warm-up.

Duric was Lim’s Cruiser’s regular partner last prep, but had to give way when the weights were too low, a most unfortunate scenario for him given it cost him two Group wins. In the case of Wimbledon, it was more loyalty than weights that was given as the reason for his choice, but regardless, Beasley was the lucky recipient in the whole musical chairs – and would certainly make sure he is not unseated from now.

“Lim’s Cruiser had a beautiful run throughout. Barrier three helped as well,” said the Australian hoop.

“All credit to Steve as the horse has really thrived off that first-up run. He’s really improved that much more.

“I was growing more and more confident every day after Tuesday’s gallop. Every day, he just kept building up.

“They went quick in front, and that suited him to a tee. At the 600m, when he sprinted, he impressed me so much with his turn of foot that I knew he couldn’t lose.”

Alibi (Glen Boss) was the one who valiantly tried to bring the thumping to more respectable proportions when he came from last to chip away at the margin from the 300m mark. But Lim’s Cruiser was already out of reach with Alibi still able to cut some lengths back and take up the runner-up spot, two lengths astern.

Storm Troops (Nooresh Juglall) lost no admirers with a third place another three-quarter length away. The winning time was 1min 9.73secs for the 1200m on the Short Course.

After banking in more than $450,000 in prizemoney from the Lion City Cup’s victory, his sixth in only nine starts, Lim’s Cruiser has now hit the $900,000 mark for the Lim’s Stable. With the Lion City Cup being the third Leg of the Singapore Sprint Series, he also picked up a $50,000 bonus for having won two Legs.

As for Emperor Max, he will retire with the proud record of nine wins, including four at Group level, the most prestigious being the Group 2 Stewards’ Cup (1400m) in 2014, and close to $1.5 million in prizemoney for Drs Gordon and Ernest Yau.

But it was also his near-misses in Group 1 races like two seconds and one third in the Lion City Cup from 2014 to 2016, not forgetting his two seconds in the former Group 1 KrisFlyer International Sprint (1200m) in 2014 (behind Lucky Nine) and 2015 (behind Aerovelocity) which endeared him to Kranji racegoers as one of the best sprinters to have graced the local turf.