NO DRAMA FOR DARC BOUNTY

Trainer Stephen Gray is predicting a bright future for Darc Bounty following his third win at Kranji on Friday night, probably his most impressive so far.

The Darci Brahma three-year-old was never in doubt once jockey Glen Boss took him straight to the lead in the $60,000 Class 4 race over 1100m. Carving up nice and easy sectionals, the $12 favourite just made his own luck upfront before kicking clear at the top of the straight to show his 11 rivals a clean pair of heels.

Mighty Conqueror (Azhar Ismail) was the only one who valiantly tried to knock him off his perch, but truth be told, he barely chipped into the margin, settling for second best 2 ¾ lengths away with longshot Savage Storm (Nooresh Juglall) third another 1 ½ lengths away. The winning time was 1min 4.5secs for the 1100m on the Polytrack. 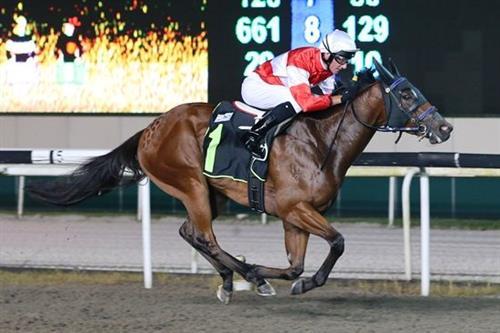 Gray said Darc Bounty was a “good little sprinter” who may one day be stretched over further and was owned by very good people, the Elaine Chen Stable.

“He’s a good little sprinter. He may get a little further but he needs more time,” said the New Zealander.

“He has learned to settle a lot better now, and he’s very versatile. He is pretty fast, though Bossy said he can overdo it, but he can be eased off a touch and sprint again, that’s what nice horses do.

“I’m very happy for the owners led by Elaine Chen. They are very good people and they deserve to have a neat little horse like this one.”

Boss said Darc Bounty was certainly not without ability, but still needs to learn how to channel his energy better.

“He is a bit of a victim of his own qualities. He is really quick, but he tries too hard at times, and you’ve got to keep that in check,” said the Australian hoop.

“He just needs to mature further. He is a little horse with a big heart.”

Darc Bounty, who was ridden by Vlad Duric at his first two wins, has now taken his record to three wins and two placings from six starts for stakes earnings in excess of $130,000 for connections.

Duric rode the resuming Chariots Of Fire for Bruce Marsh in the same race. The Showcasing colt was within striking distance at the top of the straight, but his lack of racing fitness told inside the last 300m as he weakened to run eighth.