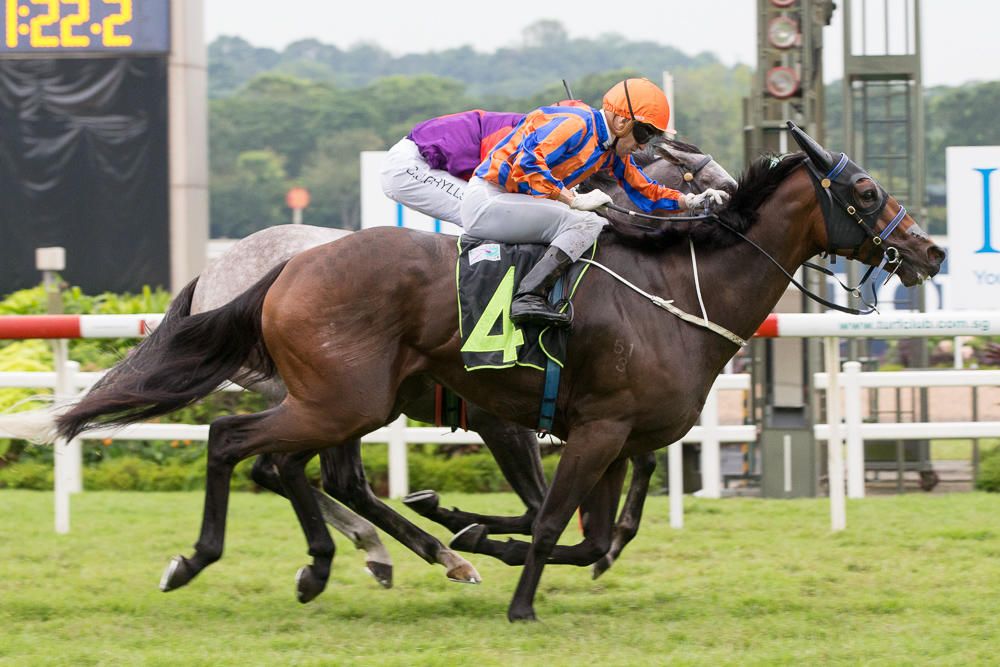 The Stephen Gray duo of Sky Rocket and Bahana (pictured above) took it easy at their first 2019 barrier trial on Thursday morning, but there won’t be any room for nonchalance very soon.

The Kiwi handler is at this stage in no real hurry to step up on their work given they have both just begun their comeback prep towards their long-term goal, the Group 1 Dester Singapore Gold Cup (2000m), which is only due on November 10.

But unlike previous seasons, Gray feels there are more choices in terms of lead-up races this year, a positive impact from the change in class ratings from April 1.

Trainer Stephen Gray has high hopes for Sky Rocket this year.
Of the two, the lightly-raced and younger Sky Rocket (Darci Brahma five-year-old) might have more upside than his stablemate, who after his Singapore Gold Cup triumph in 2016, has been on a downward spiral since.

Besides, Sky Rocket fared the better of the two in last year’s edition of the Gold Cup – seventh, only three and a half lengths off the winner Elite Invincible while Bahana ran 10th, another two and three-quarter lengths away.

It was a far cry from Bahana’s heroics under Melbourne ace jockey Craig Williams in the 2016 renewal – which was actually the last of the Elusive City seven-year-old’s haul of seven wins at Kranji.

While some saw the spectre of retirement looming for the dyed-in-the-wool stayer, Gray and Indonesian owner Untung Joesoef have not given up hope that old will to win – especially as the distances lengthen up – can be revived.

“Both horses have had a quiet spell up the spelling farms here and have come back really good,” said Gray.

“They have come up well, and I think I will be able to find a few handicap races for them with the new ratings system this year.

“They will just keep chipping away towards the Gold Cup. That is their main goal again.

“Bahana didn’t have the best preparation to the Gold Cup by running in weight-for-age races. Hopefully, we can run him in more handicap races this time.

“Untung and I discussed. He’s a sound and healthy horse and has come back well after the break, so we decided to give him one last shot.

“As for Sky Rocket, he’s a nice horse and I was happy with his trial today – as well as Bahana’s.”

Lined up in a small field of five that featured Kranji icon Debt Collector, the duo, who had both their riders clad in the blue and yellow checked silks of Gray’s Copperbelt Racing, settled in pairs behind the Ricardo Le Grange pair of Super Power (Krisna Thangamani) and Captain Jamie (Callan Murray), ahead of Debt Collector (Michael Rodd), in the running.

Into the straight, as Captain Jamie took off, Sky Rocket (Ben Thompson) did not try to keep up, but Bahana (Amirul Ismadi) showed a bit of mettle when Debt Collector loomed on his outside with his customary sweeping run. Bahana stuck on for fourth with Sky Rocket easing down to last.

Thompson, who was taking a sit on Sky Rocket for the first time, gave a nice wrap on the Sabah-owned four-time winner when he hopped off.

“He’s a very nice horse. I didn’t ask him to do too much today but he felt good throughout,” said the Australian jockey.

“I’m very happy with his run. Stephen’s got a good horse there.”

Sky Rocket is owned by Sabah businessman Patrick Lau, who is no stranger to Singapore Gold Cup glory, having won the time-honoured race with the Laurie Laxon-trained Recast in 2007.