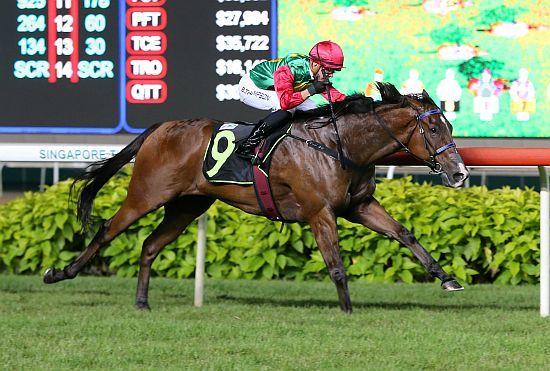 Patience paid off for Trelawney Stud and trainer Stephen Gray on Friday night after Strap Marks bolted up in the $20,000 Open Maiden race over 1200m.

The famous New Zealand stud (War Affair was born there) run by Brent and Cherry Taylor should have seen the son of Jimmy Choux make his Kranji debut as a three-year-old two years ago, but an unfortunate barrier trial injury derailed those plans.

Strap Marks fractured his pelvis in a barrier trial on October 3, 2017. Vets gave a guarded prognosis after performing surgery on him, but a spell in Malaysia coupled with plenty of TLC proved to be the right therapy.

Two winning barrier trials at Kranji in April suggested Strap Marks had retained the potential he showed prior to the untimely injury. Though unsuccessful in two starts in May two weeks apart, he ran two encouraging fourths before coming up trumps at his third try.

Taken straight to the front from his barrier No 1, Strap Marks (Ben Thompson, $34) went on to stack up the speed with Amazing Choice (Riduan Abu Bakar) and Lord Justice (Amirul Ismadi) in close attendance.

Once they straightened up for the judge, it became increasingly clear the leader would be hard to run down. Given his full head at the 300m, he lengthened up nicely to go and score handsomely by two-and-a-half lengths.

Amazing Choice stuck on well in second spot and was collared late by favourite Rapidash (Michael Rodd) who stormed home from the ruck. The photo could not separate them in second place. The winning time was 1min 10.92secs for the 1200m on the Short Course.

Gray said the race might be worth only $20,000, but he could barely wait to ring the Taylors for the good news.

“He smashed his pelvis in a barrier trial. Zac Kasa took him out on the turn,” said the Kiwi handler.

“We thought he’d be all right, but it turned out to be a big issue. He had surgery and the vets gave him a 50/50 chance of coming back.

“That put all our plans back. We sent him up to Malaysia for six months, and it was great for Brent and Cherry he won tonight.

“It may have been only worth $20,000 but it means a lot sentimentally. We always knew he had ability.

“I remember Glen Boss told me he was a good horse when he sat on him, but unfortunately he was lost in the wilderness for so long.

“At his first start, he went good but blew out. I then ran him on Polytrack as he’s a big fat bugger, he needed to run.

“Tonight, from barrier one, it was the plan to go forward and he won a nice race. It’s great for Brent and Cherry as they’re really nice people.

“They actually had the horse with Donna Logan in New Zealand. He was sold to Hong Kong, but failed the vet test because of a chip in the knee and he then came to me.”

Thompson said other than a few anxious moments behind the barriers, Strap Marks was always in a winning position from the word go.

“He got his tongue between the bit and the ring before the start, and I had to change it four or five times. Thankfully, it was okay in the end,” said the Australian jockey.

“We made use of his good barrier and he settled very well in front. He won easily, he’s a nice horse.”

“He had some rashes on his neck when young. It’s left a mark, hence the name,” said Gray.

“But yeah, it could mean something else, too.”