Derby beckons for Easy Does It 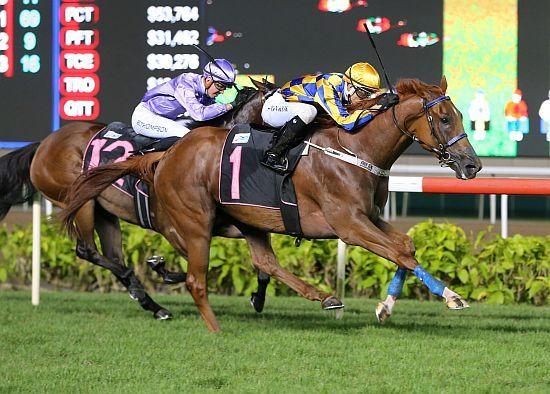 With talented apprentice jockey Simon Kok Wei Hoong in the irons, the son of Super Easy was in a striking position right from the start.

Dropped into the box seat, he always had leader Cracking Tottie (Ben Thompson) in his sights before popping up as the main threat when he was peeled off for his run at the corner.

He did, however, glance past Shadow Speed (Daniel Moor) twice in the process, but once he was on the straight and narrow, he responded to Kok’s urgings to peg Cracking Tottie back and sustain a powerful gallop to the line.

On the line, Easy Does It had three-quarter length to spare from a very gallant Cracking Tottie with Yulong Sheng Long (Matthew Kellady) third another 1 ¾ lengths away. The winning time was 1min 36.18secs for the metric mile.

With trainer Stephen Gray having jetted back to England to put in the finishing touches to Singapore sprinter Lim’s Cruiser’s prep towards a second tilt at a race there (either the Group 1 Darley July over 1200m at Newmarket on July 13 or the Group 2 Lennox Stakes over 1400m at Goodwood on July 30), it was his wife Bridget who deputised for the post-race debrief at Kranji.

“He’s a nice horse. He should have won first-up (from an 18-month spell), but he got checked,” said Gray.

“Steve has always thought well of him – since he was a three-year-old. He had to win tonight to make it for the Derby and he’s done it well.

“It was his first time over the mile and on the way he finished off, he should be able to see out the 1800m as well.”

The Group 1 Singapore Derby (1800m) is the third and final Leg of the Singapore Four-Year-Old Challenge and will be run on July 21.

Kok said getting thrown onto horses like Easy Does It makes his job easier, and that gelding certainly lived up to his name throughout the race.

“He’s a horse who has good speed and can switch off and relax,” said the Ipoh-born rider.

“There was a solid pace to the race and it suited him nicely. I just made sure I didn’t use too much petrol at the beginning and in the middle stage.

“He hit the line strongly and I think the three-kilo claim helped him, too.”

With that third success, Easy Does It has now taken his prizemoney past the $110,000 mark for the Easy Does It Stable, a syndicate made up mostly of New Zealanders.