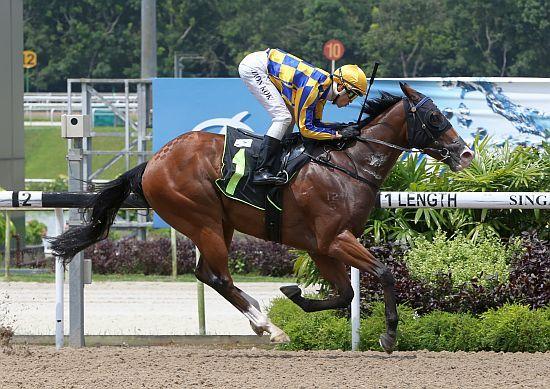 After knocking on the door for a while, Hugo finally broke his maiden status with a pulsating win in the $75,000 Restricted Maiden Division 2 race over 1200m on Polytrack on Sunday.

Three times second and twice third in similar company, the Smart Missile three-year-old was not to be denied his moment in the sun at his ninth start under a 10-out-of-10 ride from rising apprentice jockey Simon Kok Wei Hoong.

Parked outside speedy filly Stormy View (Juan Paul van der Merwe), Hugo was always travelling like a winner – an impression he franked in no uncertain terms when he zoomed past Stormy View upon straightening to go and blitz the field by six lengths.

The fast-closing Lucky Trio (Benny Woodworth) won the battle for the minors with Star Fiftytwo (John Sundradas) third another length away.

Well-backed into $21, Hugo registered 1min 11.48secs for the 1200m on the Polytrack and has taken his previous stakes earnings of $66,000 (from his five placings) past the $100,000 mark with that maiden success for Gray who owns and bred him out of his broodmare Princess Katie.

Currently in England to keep an eye on Lim’s Cruiser as the champion sprinter gears up for his second assignment in either the Group 1 Darley July (1200m) at Newmarket on July 13 or the Group 2 Lennox Stakes (1400m) at Goodwood on July 30, Gray was replaced by his wife Bridget at the Kranji winner’s circle – for the second time this weekend after Easy Does It (also ridden by Kok) scored on Friday.

“I just spoke to Steve and he’s rapt as well.”

Kok said he knew Hugo had an engine but did not expect him to explode away the way he did.

“This horse hasn’t been lucky. There was only one concern today – his first time on Polytrack,” said the Ipoh-born rider.

“But he was very comfortable on it. He strode out nicely as he relaxed behind the leader (Stormy View).

“He showed a strong finish in the end. I didn’t expect him to show such a strong of foot.”