End of rocky road for Bencoolen 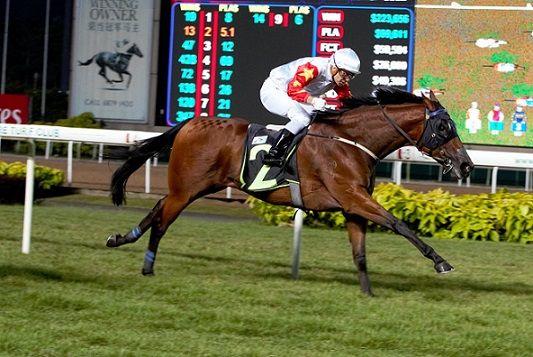 Bencoolen finally franked the potential he has always shown with a convincing first win in the $20,000 Open Maiden race over 1200m on Friday night.

Given a confident ride by champion jockey Vlad Duric, Bencoolen ($13) was quick out of his barrier one, but was just as quickly eased out of the speed battle when a trio made up of Lim’s Sphere (Benny Woodworth), Agni (Ng Choon Kiat) and Air Combat (Juan Paul van der Merwe) rushed past him.

Duric waited for the top of the straight to stoke the Swiss Ace four-year-old up, who darted to the front for a move that looked a foregone conclusion, but he had to contend with one late challenge from Lee Freedman’s newcomer Smoke And Mirrors (Wong Chin Chuen) who was flying home on the outside.

Under Duric’s hard riding, Bencoolen, however, kept finding to hold Smoke And Mirrors off by three parts of a length. Attention (Patrick Moloney) also ran on creditably for third place another 2 ¼ lengths away. The winning time was 1min 11.02secs for the 1200m on the Long Course

Trainer Stephen Gray said the winner’s circle was a place Bencoolen could have visited earlier, but it’s been a struggle to get him there, especially following a recent racing setback.

“He’s probably better than what he’s shown. Two starts back, he got galloped on and it was pretty serious,” said the Kiwi handler.

“We thought we were on top of it and then it got infected. We had to put him on penicillin and we struggled for a while, but luckily, he got well.

“He ran on good with Vlad two starts back. At his last start, he was trapped on the fence, and when they sprinted away, he was left flat-footed.

“He probably needs a mile. I brought two good friends together to race this horse, Paul Hickman and Mr Lim Siah Mong.

“They have another horse with me. It’s all about having a bit of fun together.”

Duric said all the credit should go to Gray for not only his patience, but also for his horsemanship.

“I actually told Steve to leave the blinkers off as he was quite aggressive with them on, but Steve said he would be okay with them. It was a good call,” said the two-time Singapore champion jockey.

“He was in a weak field tonight and he had the perfect draw. I still had to rate him and see how he would get through the field as he’s not the brightest spark.

“But it worked out smoothly. I had to really get him through my rhythm in the end.”

Named after the famous Singapore street downtown, Bencoolen has now taken his stakes earnings to somewhere around the $15,000 mark for the Commonwealth Stable.