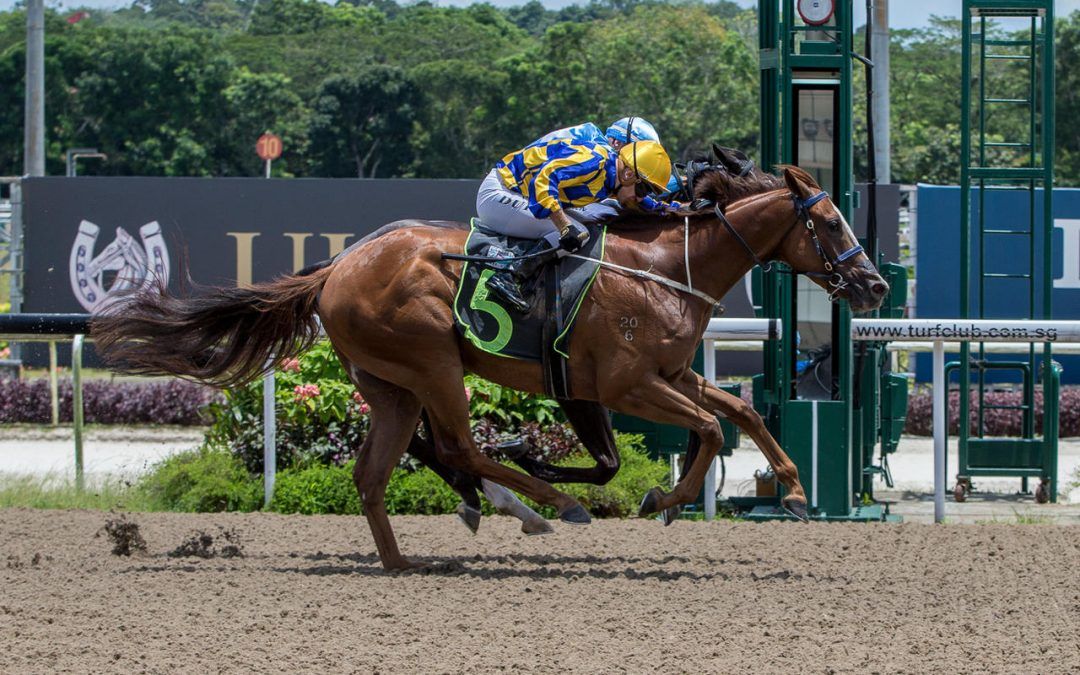 Kiwi trainer Stephen Gray felt bad for the big party of owners who had come down to Kranji to see Heavenly Dancer’s race debut when their pride and joy blew the start on Sunday.

Hopes and excitement had been building up in anticipation of the Echoes Of Heaven three-year-old’s first race, but they can all be dashed to the ground in one split second.

There was still a glimmer of hope when the chestnut gelding recovered from the stumble and made his way forward around runners, but another bump (copped from Loving Babe) at the home turn was to Gray the last nail in the coffin.

The $75,000 Restricted Maiden race was a 1000m speed scamper where an interruption in any way, shape or form usually means it’s game over.

Add the fact that upfront, Michael Clements’ newcomer Latent Power (Louis-Philippe Beuzelin) was showing a clean set of heels after he pinched a three-length break on the pack despite coming off a horrendous four-wide trip, only the fool-hardy would still believe in a miracle.

But the testing journey eventually told on Latent Power ($33), and right on cue, Heavenly Dancer ($21), under Vlad Duric’s trademark hard whip-riding, started to sprout wings at the rate of knots on the outside.

One was shortening, one was quickening. As is the case for such scenarios, the victor would hinge on how fast the finishing line comes up.

As the clocker stopped the watch at 59.84 seconds, it was Heavenly Dancer in Gray’s Copperbelt Racing silks, who got a short head in front of Latent Power’s white face. Favourite Brutus (Hakim Kamaruddin) ran third another two lengths away.

After roaring Heavenly Dancer to the line from an untenable position, Gray and the owners could let their unbridled joy explode at the winner’s box.

“When he missed the start, and got bumped at the turn, I said ‘no chance’,” said Gray.

“Only good horses like Emperor Max and Lim’s Cruiser can get away with it, and do what he did. To win like that when he was knocked around is fantastic, he should have won easily.

“We bought him from the Campins (New Zealand bloodstock agent), just like another good horse of ours, Sky Rocket.

“He was actually sold to Hong Kong interests, but we made an offer for him and they took it. I liked the horse a lot, we gave him two 1000m trials and he kept getting better and better.

“I think he’ll end up becoming a very good horse. I’ve always preferred buying young unraced horses like him, instead of second-hand horses.

“A first race over 1000m can be testing for such young horses, but there are some nice horses coming up like Hwasong next week, and we thought it’d be better to split those good horses.”

Duric said he had to switch to Plan B when Heavenly Dancer bombed the start and he was blown away by his turn of foot in the straight.

“The plan was to run third or fourth, but he was nervous at the barriers and bombed the start. I just let him come back under me and ride him for luck,” said the Australian hoop.

“When I put him out at the top of the straight, he was very impressive. It was a very good gallop, he is a very nice horse.”