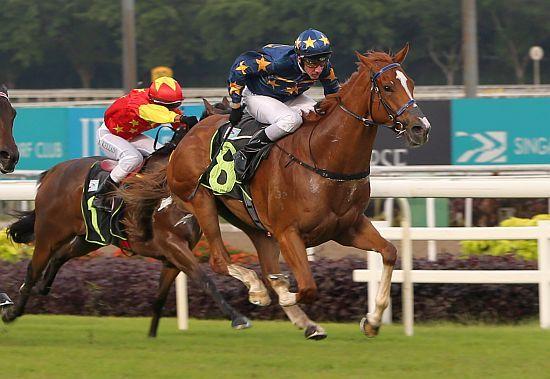 Trainer Stephen Gray put some big wraps on Lim’s Spin after the $8 favourite enjoyed a better run at his second start to open his account on Friday night.

At his debut in a Restricted Maiden race over 1200m, Lim’s Spin was caught three deep throughout and got checked, but still ran a creditable fifth.

Freshened up seven weeks later in a similar race, the $75,000 Elite Invincible 2018 Stakes, Lim’s Spin (John Powell) had things going his way this time around when buried away on the rails. There was a brief moment of doubt he could get stuck behind runners, but when a run presented itself at the 300m, he darted through for a solid one-length win from Top Of The Line (Michael Rodd) with Lady Fast (Ruan Maia) third another short head away.

“He’s a really, really nice horse. He was very unlucky at his first start, he should’ve won,” said Gray.

“He was trapped wide and got knocked around, but we were patient with him and got him right again.

“There was more pressure the first time. I told (owner) Mr Lim (Siah Mong) this could be his next good horse.

“Tonight’s race was a bit of a test for him. I was a bit worried when he was trapped on the fence, but John is a good rider. He got him to relax, he didn’t panic and they came through and won impressively.”

Powell said that Lim’s Spin still needs to hone his craft further, especially regarding his galloping strides, but the engine was clearly there.

“He’s still leggy and I think he wants further. He quickened very well when he went through the gap,” said the Australian hoop.

“He’s still very raw and his legs go all over the place when he’s off the bridle. I just wanted to hold him together as best as I could.

“He’s probably better if you take him to the outside and let him wind up slowly. You just have to put him where he is happy.”