Hard not Too Think about Derby 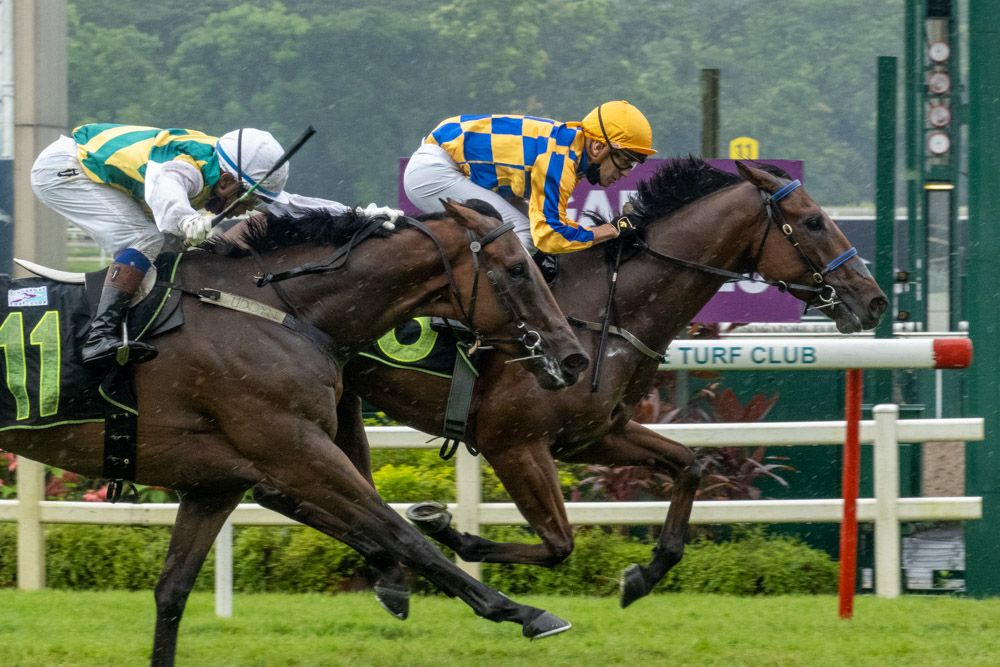 Trainer Stephen Gray predicts a staying future for Saturday winner Hard Too Think, and more boldly, a berth in the same highlight of the day next year, the Singapore Derby.

Well backed into $20, the All Too Hard four-year-old took up the running for Vlad Duric in the $75,000 Well Done 2016 Stakes Restricted Maiden race over 1400m, and under the champion jockey’s vigorous handling, stoutly repelled his challengers inside the last 300m to open his account in style.

The well-backed Speedy Missile (Hakim Kamaruddin) put an indent into the margin late to run him down to half-a-length. Third another three-quarter length away was Kinabalu Warrior (Benny Woodworth). The winning time was 1min 24.33secs for the 1400m on the Long Course.

A winner of his last three barrier trials, Hard Too Think ran a fair fifth to Savvy Command in a Restricted Maiden race over 1200m on debut on August 2, but was obviously more at home over the seven furlongs on Saturday.

“He’s a good, nice staying sort. He’s got upsides, he could be a Derby horse next year,” said Gray.

“He’s got a good staying pedigree and he’s also got a bit of speed. Today, he was drawn wide and had to fight off the horses on the inside to get across.

“He showed a lot of fight. He’s a lovely horse and it was a good win, I’m really happy especially after the disappointment of seeing Our Pinnacle bleed in the previous race.

“Racing is a tough game. One minute, you get a kick in the arse, and in the next, you bounce back.

“Anyway, it’s nice for Hard Too Think’s syndication of owners, made up of a good mix of local, New Zealand and Australian owners.”

After a quiet post-COVID-19 return to business with only one win from Kharisma on July 26 since racing resumed two weeks earlier, Gray’s horses have been hitting their straps in the last couple of weeks.

The Kiwi saddled a training double with Infinite Wisdom and Hwasong last Sunday, and has now added another winner through Hard Too Think to take his seasonal tally to 15 winners.

Gray had even dropped from sixth to 10th place by the end of August, but that recent purple patch has lifted him back into seventh place on 15 winners. Reigning champion trainer Mark Walker is well clear at the top of the heap on 35 winners.