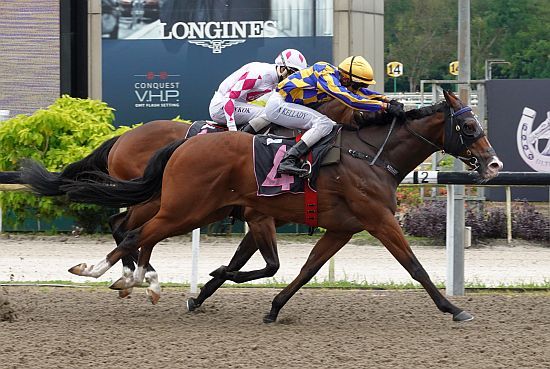 Trainer Stephen Gray was in high spirits after stable pet Hugo rang up a double for the yard on Saturday.

Earlier on, newcomer Sure Will Do struck at his first start for one of Gray’s favourite owners, Mr Chen Chin Sang and wife Elaine. Two and a half hours later, it’s the family’s favourite who scores in the $70,000 Class 3 speed scamper over 1000m.

Gray was in impish mood as he headed home early (no runner in the last of the 11-race card) with a second win in the bag.

“Missus won’t be grumpy at home. I’ll pour myself a nice gin, have a lovely home-cooked dinner, and I might even get the bonus!” he said.

“Hugo stuck on well at his last run in Class 2, he had a light weight on his back then. He won a nice race today, he has been a great money spinner to us.

“We trained his grandmother (Go Getter) and his mother (Princess Katie) and Hugo was the first foal. He has always put his hand up when things were not so good for us, he’s been a great contributor – helps pay the school fees for sure.”

Another person who may well down a few celebratory drinks following the unfancied $74 shot’s pulsating win is Matthew Kellady, the lucky replacement jockey after champion jockey Vlad Duric was stood down after one race for dehydration.

The Malaysian turned in an inspired ride that is likely to get the stamp of approval from Duric as well.

After allowing the Smart Missile five-year-old to tack onto the blistering speed set by the Cliff Brown duo of Ararat Lady (Simon Kok Wei Hoong) and Lonhro Gold (Juan Paul van der Merwe) around five lengths off in fifth place, Kellady stoked him up for his run upon straightening.

Ararat Lady looked home and hosed at the 200m, but under Kellady’s persuader, Hugo wore down the game mare with every stride to get up by half-a-length.

The third Brown galloper Bluestone (Joseph See) steamed home from the ruck to run third another length away. The winning time was 58.39 seconds for the Polytrack 1000m.

“I had no rider for him at first and thought of putting my apprentice Winston (Cheah Wei Wen) on,” said Gray.

“Vlad then rang up for the ride, but he got sick. I put Matt on because he has been helping me out for a long time.

With that fifth win in 19 starts, Hugo has now taken his total prizemoney past the quarter of a million mark for the Grays.