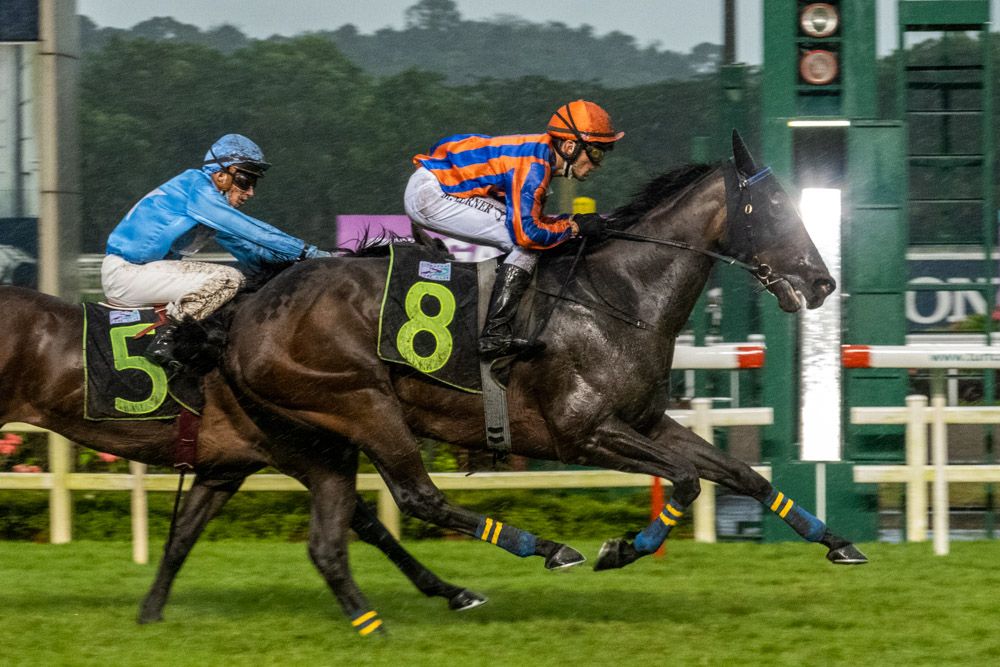 Sabah owner Patrick Lau’s patience with out-of-form Sky Rocket had been wearing thin, but he did well to heed trainer Stephen Gray’s unshakeable belief that the Darci Brahma seven-year-old’s better days were not behind him.

Starved of wins since September 2018, Sky Rocket suddenly struck a rich vein of form to return to the winner’s circle in Saturday’s drama-packed $85,000 Better Life 2012 Stakes Kranji Stakes B race over the turf mile.

Ahead of only one runner (Destroyer Eclipse) for most of the race, Sky Rocket (Marc Lerner) only started to warm up to the task at the approach of the home turn. Race-leader Circuit Mission (Ruan Maia) looked to have stolen a march at the top of the straight, especially after stablemate and favourite Loyalty Man (Iskandar Rosman) fluffed his lines at the start.

Circuit Mission was doing his best job to hang on to his slender lead, but meanwhile, Loyalty Man had reignited hopes he could make good on his tardy getaway after he came vying for a gap at the 400m, but luck deserted him for the second time.

Tesoro Privado, who was hard at work trying to take the race up to Circuit Mission, suddenly knuckled over and unseated his rider Dennis Tan Zhi Xian (luckily, without harm). Unfortunately, Loyalty Man took the worst brunt of that incident as he copped a bad check, and the race was this time over for good for him.

Though in close proximity to the dramatic fall, Sincerely (Louis-Philippe Beuzelin) was on the other hand among those who avoided the backwash, and was next to be hailed the winner when he easily mastered Circuit Mission.

But that moment of hope for the Michael Clements team turned out to be shortlived when, out of nowhere, Sky Rocket ($208) burst through with an explosive turn of foot on the outside.

Gray’s charge kept at it to go and inflict Sincerely a half-length defeat while Circuit Mission faded late but did well to cling on to third place another 3 ¾ lengths away. The winning time was 1min 38.51secs for the 1600m on the Short Course.

“It’s good to see him back, especially after he bled last year (in Group 3 El Dorado Classic over 2000m),” said Gray.

“We got him back, but then COVID-19 came about. Anyway, he had a couple of starts and he then went super over the mile (seventh to Ocean Crossing on September 26).

“I then thought I’d prepare him towards the Gold Cup. He ran in a 1800m (October 31) race but he was trapped four wide on a heavy track, he pulled his head off.

“I thought then let’s forget the Cup, and I then ran him in a Polytrack race (November 15). But it rained, we couldn’t see the horse, he copped a lot of kickback, even if Simon (Kok Wei Hoong) said he didn’t go too bad.

“And then I said, what the hell, let’s back him up this week. I told Marc to ride him quiet, he was rock-hard fit, the race suited him, and he was right on target.

“Let’s not forget this horse was one of the favourites in the Gold Cup two years ago (won by Elite Invincible). I’m really pleased for the owner as he was ready to pull the pin on him, but I told him to give the horse another chance.

“I can’t blame the owner, as it’s even tougher these days, but I told him to just trust me, the horse will come right, and I’m glad he has.”

Sky Rocket has now scored five wins and placed three times from 22 starts for prizemoney in excess of $250,000 for Lau’s Sky Rocket Stable.