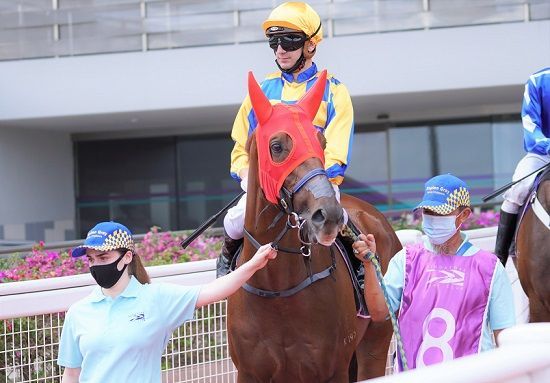 What are the chances of seeing the daughter of a jockey leading her dad out on a raceday in Singapore?

It might be a more common sight in countries like Australia, England, US or France where racing is a family tradition that is gender-neutral and is often passed down through generations, but it would be fair to say it never happened here at Kranji or even Bukit Timah.

Until last Saturday when a new syce named Sage stood out from the usual stable personnel at the parade ring, strapping horse No 8 Silkardo for trainer Stephen Gray in Race 7. In a totally unrelated twist and coincidence, a horse by the name of Sage (trained by Steven Burridge) made a winning debut on the same day!

For those who don’t know the petite girl, she happens to have a famous family name: Duric – yes, she is the middle daughter of the four-time Singapore champion jockey, who was sitting proudly atop Silkardo when they were paraded around at Kranji and led out to the tracks.

Sage is the only one of Duric’s and wife Storm’s three daughters (other two are Lily and Audrey) to be interested in horse racing, so much so she recently decided to follow in her dad’s footsteps – to become a jockey.

Having learned to ride ponies in their former family farm in Nar Nar Goon in rural Victoria, Sage is, however, not as familiar with racehorses. As she just turned 18 in November, she decided to apply for a job as a syce – and hopefully, a track rider – with Gray (with dad, being a regular jockey to the Kiwi, putting in a few good words) to kick things off.

She has been with Gray for nearly two weeks now, and Silkardo was her first strapping duties, even if she was not thrown in completely at the deep end. Wearing the official light turquoise Club strapping duty polo tee, Sage was seen walking in tandem with a more experienced groom alongside the All Too Hard four-year-old.

As she and Gray watched the race from the grandstand, any silent hopes for a fairytale start to her introduction to raceday duties were dashed when Silkardo was trapped three to four deep throughout the Polytrack 1700m race. The chestnut had to do too much work, but still ran on gallantly for fourth to Tsurian.

“My two sisters are not interested in racing, but I’ve always loved horses. I want to become a jockey like dad.

“For now, I’m happy to be working as a groom for Mr Gray. I’m doing mainly stable duties, like putting the saddle on, etc.

“I had a bit of racing experience back home when I had a short stint with Gai Waterhouse. Dad rode a fair bit for her in Melbourne.

“My plan is to join Racing Victoria when I return home. They run an apprentice jockeys’ programme, but I need to be selected.

“At the same time, I’ll be starting a business course at a university soon, so I’ll have to see how it all pans out.”

Duric was for one happy there is a chance the name “Duric” may be perpetuated on a racecard for a while longer, though he wouldn’t mind a businesswoman in the family either.

“When she said she wanted to become a jockey, I was of course supportive. I think we should support all kids who want to pursue a dream, and we can only wish them well,” said Duric.

“The biggest thing for Sage, of course, is that she stays safe. For now, she has to take one little step at a time with Stephen.

“I’m very grateful to Stephen and Bridget for having given Sage the opportunity to work at their stables. (Assistant-trainers) Lisa O’Shea and Nick Selvan have shown her the ropes how to saddle a horse, etc.

“She’s got a real spring in her step at the moment. It’s lovely to see young people, especially your own children, so enthusiastic about racing as we need people like them in this industry.

“I’m really proud of her for giving it a crack. Of course, it’s a long road ahead, and she may not be good enough, but at least she’s giving it a try.

“She’s starting her university course online next month or so, and that business degree is her priority for now. As she’s a Permanent Resident here, she can work here, so while she studies, she will keep working at the stable.

“I think she can’t make it for the RV intake of 2022 as she’ll still be in Singapore. It’s okay as she will still get the opportunity to get some experience.

“Perhaps she can get into the 2023 influx, but that is provided she is good enough to be selected.”

If genes are anything to go by, there is a high chance Sage will end up being the proverbial chip off the old block.

“Sage has always been the one into sports in general. The other two did a little bit of riding when they were younger but they’re not into sports or racing now,” said Duric.

“Sage follows racing and football, we barrack for the same team, Essendon. It’s great that one of my girls shares my interest in sports.”