Charmed run continues for Kharisma even at Kranji Stakes A 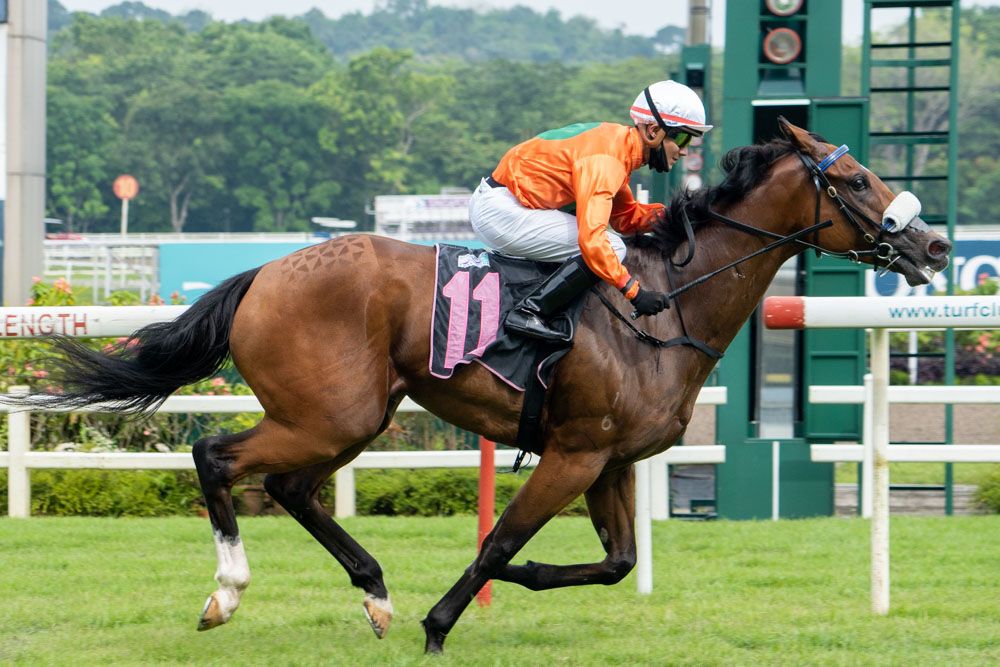 A daring gamble to let Kharisma skip a few classes returned instant dividends on Sunday, but also gave trainer Stephen Gray a bit of a conundrum to ponder: Where to from here?

Last victorious in Class 3 company three weeks ago when he was bringing up a two-in-a-row, the Mossman four-year-old was rightly regarded as a horse on the up, but to be tossed in at the deep end in the $100,000 Kranji Stakes A race over 1200m for the hat-trick of wins was a leap of faith some might have thought as a little premature, but Gray was game enough to take it on.

The 50.5kgs was a beguiling luxury load, but turf was not really a tried and tested surface for the Indonesian-owned gelding who had claimed all his five wins on Polytrack.

Gray was unfazed. No wins does not equate to a no-go zone, it’s just that the opportunities to test the gelding on grass had not been flowing in abundance.

Last-start winning partner Troy See forfeiting the ride after he couldn’t make the weight was a downer, but finding former two-time Singapore champion apprentice jockey Wong Chin Chuen sitting downstairs in the jockeys’ room without a ride proved to be a case of See’s loss and Wong’s gain.

Wong never looked back. With an uncomplicated conveyance underneath, all the Malaysian rider had to do was apply the Kiwi trainer’s instructions to the letter, and the final outcome was a stunning coup at the expense of some of Kranji’s topliners like Top Knight, Zac Kasa and Skywalk, to name a few.

Vying for the lead between runners, Kharisma ($17) was able to secure it without burning too much petrol, with Wong just having to manage his energy levels from thereon in.

That he did to a nicety. Down the stretch to the line, they easily shook off the close attentions of Skywalk (Danny Beasley) and Zac Kasa (Marc Lerner), but the lightweight was still not out of the woods.

Churchill (Juan Paul van der Merwe) and Sacred Rebel (Hakim Kamaruddin) were thereabouts while favourite Top Knight (Vlad Duric), who was resuming, had typically begun a looping run on the outside, but Kharisma kept giving plenty of sight, never looking in any sort of danger of getting run down.

It was stablemate Darc Bounty (Jerlyn Seow Poh Hui) who eventually claimed the runner-up spot 1 ¾ lengths away for a Gray quinella, with Webster (Joseph See) third another length away, just denying Churchill of a spot on the podium by a neck.

“He’s not raced a lot on grass because there were more Polytrack races then. There was no choice, but he ran good races on grass before, so I wasn’t worried about that.” said Gray.

“He’s a happy horse, he’s a winner. His syce Ragu looks after him very well, and that’s why he’s doing so well, he wants to run.

“He’s a genuine handicap horse, and with the light weight, I had a throw of the dice as I thought the field was not as strong. He did very well, he also ran time.

“CC rode him a treat. Troy tried to waste down to that weight, but unfortunately, he couldn’t make it in the end.

“Troy’s not done anything wrong on him, and will still get on at his next run, unless it’s a low weight he can’t make. CC is a good lightweight jockey who rode a lot of winners for us, so I may consider him as a back-up again.

“A race like the Lion City Cup is coming up, but it’s at weight-for-age. There are also the four-year-old races coming up, so we’ll have to discuss with the owner (Untung Joesoef of Dago Stable) even if, usually, I would rather set him for handicap races.

“I’m really not sure where he goes from here, but these are unusual times, and we have to resort to unusual measures.”

The Group 1 Lion City Cup (1200m) will be the first feature race to be held this season when it’s run in three weeks’ time on April 24.

With that second win on Easter Sunday (he won earlier aboard Our Secret Weapon), Wong racks up his 10th winner for the season to join a bunched-up group sitting on the same number of winners – Louis-Philippe Beuzelin and Vlad Duric, all one length behind current leader Marc Lerner (who returned empty-handed on Sunday).

“I was very lucky it’s a lightweight ride. There aren’t many left who can take the ride, and Stephen came to me,” said Wong.

“Kharisma is a simple horse to ride. Stephen just told me to jump him forward and sit off the leader if someone else goes faster.

“But I was able to take the lead, and from there, I controlled the speed. He did it comfortably, no-one came to fight with him and he responded very well in the straight.

With that sixth win from 13 starts, not to forget his two seconds and two thirds, Kharisma has now seen his bank account bulge past the quarter million mark for the Dago Stable, who is better remembered for winning the 2016 Dester Singapore Gold Cup (2200m) with Bahana.