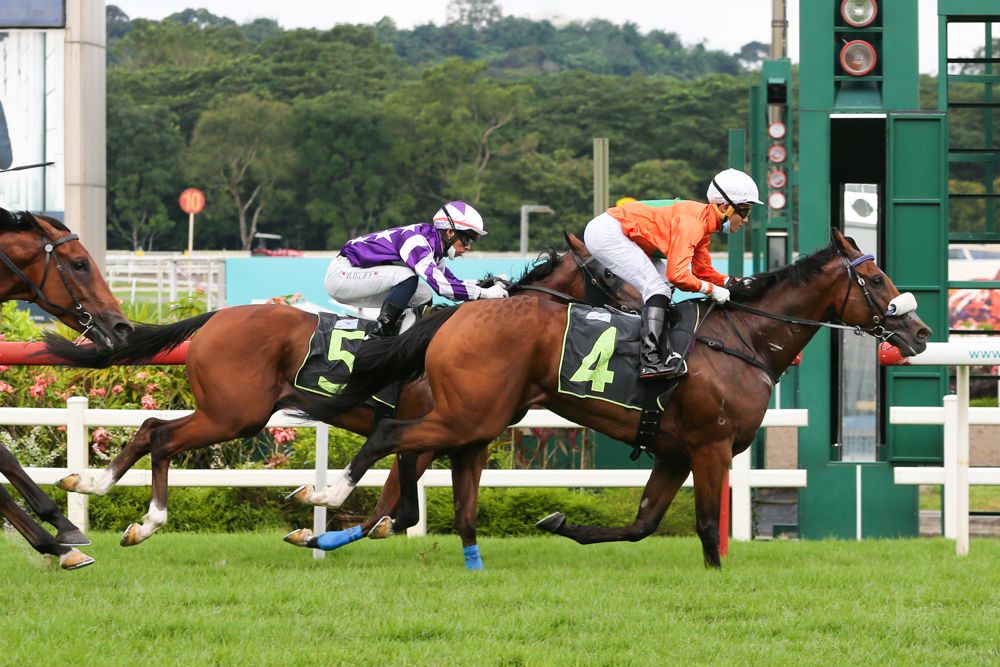 Promising sprinter Kharisma bounced back from his luckless defeat in the Lion City Cup with a resounding win in the $100,000 Better Life 2012 Stakes, a Kranji Stakes A race over 1200m on Saturday.

Well handled by Wong Chin Chuen, the Mossman four-year-old was never in doubt once he came off his handy spot on the outside of expected leader Makkem Lad (Yusoff Fadzli) before going for broke upon cornering.

Tough cookie Makkem Lad gave his all as he always does, but Kharisma was just too good when he asserted his superiority in the last 100m going on to score with half-a-length to spare.

The run of the race had to go to the resuming Mr Malek (Simon Kok Wei Hoong) who flew home from the ruck to grab a meritorious third place for his new handler Steven Burridge, only another three-quarter length away.

Sent out at $17, Kharisma clocked 1min 9.33secs for the 1200m on the Short Course. It was his seventh win from 15 starts for Indonesian owner Untung Joesoef of Dago Stable for stakes earnings that have now tipped past the $300,000 mark.

Winning trainer Stephen Gray said it was not the plan to run his brilliant sprinter in that race, but decided it would suit him down to the ground on second thoughts, and he was proven right on the money.

“I thought he ran very well in the Lion City Cup considering he lost his front shoe and was caught wide throughout,” said the Kiwi handler.

“With a better draw, he could have done better, but his run was still very good at weight-for-age.

“I looked around for a race for him. I didn’t want to run him in that race at first, but there weren’t many options.

“He’s such an improved horse and form the way he did it in the Lion City Cup, he was going the right way. I gave him a freshen and a few gallops, I was very happy with him.

“His work on Tuesday was terrific. He’s a lovely little horse and a nice horse to train, even if he doesn’t have the best feet.

“He’s also got a lovely owner I really appreciate. Currently, there are not many new horses to replace the old ones, horses have dropped away, so it’s good to have such a good horse around.

“I hope this will turn around, but I don’t know. It’s tough for owners, I know Untung himself is struggling in Indonesia and can’t afford to buy new horses, and he can’t be here to enjoy the horses he has left.”

The Kiwi handler was hard-pressed to split both winners, so chuffed he was with both wins, one for having pretty much become his stable star these days (Kharisma) and the other one for sentimental reasons.

Previous owners wanted to send Our Pinnacle to the scrapheap, but Gray would have none of that, bought him out with a new group of owners and Saturday was a first vindication of his faith in the Pins six-year-old.

A busy finish was shaping up at the 300m with favourite The Marksman (Danny Beasley) making the best impression on the outer, but Hakim had in the meantime weaved a needle through the pack, and once Our Pinnacle saw daylight, he finished the best to beat Thunder (Marc Lerner) by three-quarter length with The Marksman peaking on his run to take third place another half-length away.

Unfancied at $52, Our Pinnacle ran the 1400m on the Short Course in 1min 22.58secs and has taken his record to two wins and four placings form 18 starts for prizemoney past the $105,000 mark for the Stephen Gray Racing Stable.

“That horse was a bit unlucky at his last start, he got held up in the straight. Today he won a nice win that will make his new owners feel good for sure,” said Gray.

“After he had a bleeding attack, his previous owner gave up on him, but I was not going to get rid of him. I took over him with a group of new people and I myself have a one-third share in him.

“They must be excited though they can’t be here at the races. Most of them are here, but there are some who are overseas.

“He was about to be deleted, but I thought he was too nice a horse. We got into a horse for nothing and today he’s given us the biggest thrill.”

Gray said a large part of the credit should go to his young rider, whom he said had an exceptional talent he had seldom seen here at Kranji.

“I was lucky to have Hakim for the ride today. He claims two kilos, and from the way he’s riding, he’s a riding talent beyond what he’s done,” he said.

“No doubt he gets a bit lost at times, he gets riding suspensions and stuff, which I’m sure would have been addressed by former riding master Matty Pumpa if he was still around, but after today’s ride, I told him it was the ride of a top jockey.

“He has so much talent, but it’s a shame Matty is not here as I’m sure Hakim misses having him around, too.”