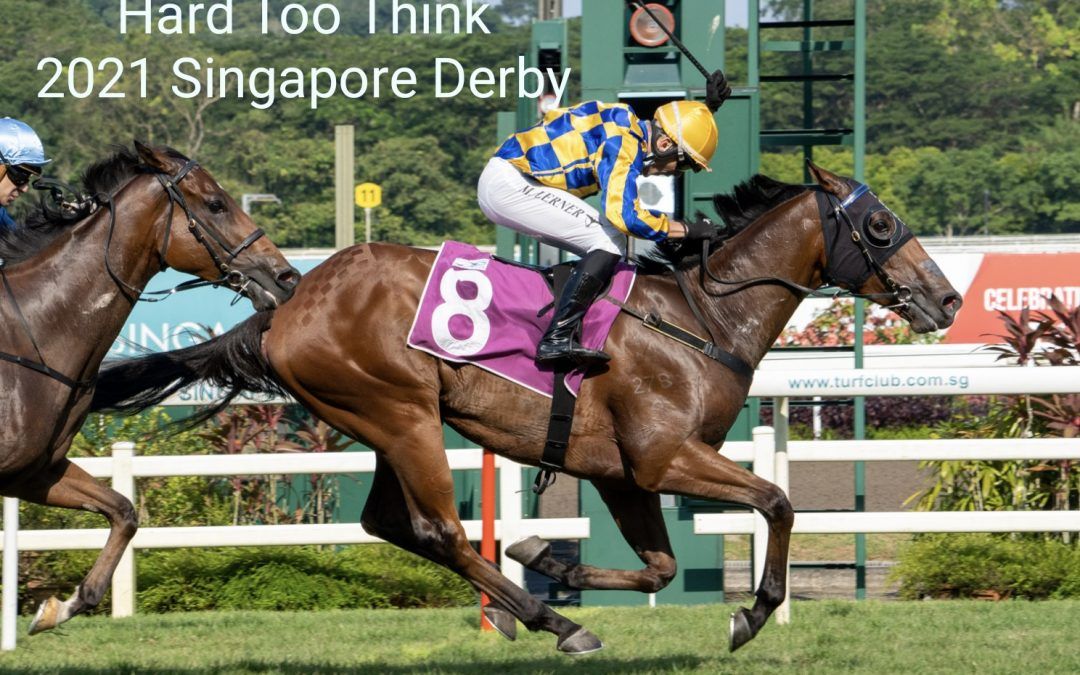 Derby winner Hard Too Think took a step closer to his racing comeback with a pleasing barrier trial on Tuesday morning.

Not sighted since his Group 1 Singapore Derby (1800m) triumph on July 27, the All Too Hard five-year-old was getting the last finishing touches before trainer Stephen Gray flags him off for his Singapore Gold Cup (2000m) campaign.

With Derby-winning partner Marc Lerner aboard, he ran a close-up second to the Michael Clements-trained Tuesday, even though he was never hurried along during the 1000m spin.

“It was nothing special, just a nice pipe opener. He needed that to get his Gold Cup prep off and running, but he felt really good,” said Lerner.

Gray had always made it clear the Singapore Gold Cup on November 14 was Hard Too Think’s Holy Grail while the Derby was more incidental than anything else – more like a throw at the stumps since “you turn four only once!”.

The Kiwi horseman is obviously delighted Hard Too Think handed him a second Singapore Derby after Lim’s Prestige in 2007, but plotting a path towards the Gold Cup will require even more fancy footwork.

It’s a balancing act between mileage in the right lead-ups while still getting into the time-honoured handicap race at a low enough weight.

Some strategic moves were therefore in order in the next eight weeks, such as jettisoning some races that could have swayed Gray into temptation – like last Saturday’s Group 1 Raffles Cup (1600m).

“They went hard and fast, that would have taken the edge off him, especially first-up. He’s better off in these handicap races carrying a light weight.

“That’s why I’ve picked that Kranji Stakes A race over 1400m next week (October 2). It’s still too short, but it’ll be like a trial for him towards the QEII Cup.”

The Group 1 Queen Elizabeth II Cup is also run at weight-for-age conditions, but the rise to a more suitable 1800m trip made it harder to bypass. The plots and sub-plots to transpire from that race will dictate to a large extent whether Gray’s wish for a low weight is granted.

“Everything will depend on how he runs in the next two starts and how much weight he gets. The horse is still well after the freshen-up, he’s been ticking over nicely and he trialled quite nice today,” said Gray.

“I think Dan’s (Meagher) horse (Raffles Cup winner Lim’s Lightning) will still be hard to beat in the QEII Cup, but it’ll be a good lead-up to the Gold Cup.

“Marc won’t be able to ride him next week as he’ll get a low weight. Danny Beasley will ride him, but Marc will ride him in the QEII Cup.

“We’ll see what the handicaps come out as for the Gold Cup, we’ll have to play it by ear. If he gets a low handicap, Danny will ride him again, but that’s also provided Lim’s Lightning (Beasley’s first-choice mount) doesn’t run.

“The main aim is the Gold Cup, it’s still worth one million dollars, after all. We’ll just have to wait a while to have a better idea how he gets there.”

Gray would have a fair idea how to win one as he already has on board one Singapore Gold Cup, then run over 2200m in 2016 with Bahana, but the road to Gold was a different ball game then.

“We had plenty of options in those days. Bahana won a 2000m race and the prelude, the El Dorado Classic over the same 2200m distance before he won the Gold Cup,” he recalled.

“He was underdone the next year when he tried to go back-to-back as he had missed some important races. He still ran great (lost by a lip to Gilt Complex).

“But there aren’t any of those options now, except for the QEII Cup, which like I said, is a weight-for-age race. We can’t change the cards we are dealt.”

Meanwhile, Hard Too Think won’t be alone at his return to racing as he will be paired up with Kharisma, arguably Gray’s next best horse under his barn roof.

The Mossman five-year-old ran in last Sunday’s Kranji Stakes A race over 1200m, but despite enjoying a rails-hugging race, he didn’t go through his gears when race-leader Makkem Lad skipped clear in the home straight and finished fifth.

“Kharisma was too fat, but he still ran great. He needed the run,” said Gray of the horse raced by Bahana’s Dago Stable.

“I just have to keep the weight off his back heading into that Polytrack feature (Group 3 Merlion Trophy over 1200m) at the end of the year (November 27).”

With Iskandar Rosman, Kharisma’s partner on Saturday and at the last of his eight wins, suspended for careless riding, Gray drew inspiration from last week’s trend in search of another claimer, and it’s not the obvious pick, runaway leading apprentice Hakim Kamaruddin – who is hard to book, anyway.

“I can’t get Hakim, he’s riding something else. Yusoff (Fadzli) rode Donna’s (Logan) horse (Makkem Lad) really well, and I may put him on,” said Gray.

“If the claim is only one kilo, I might as well get a senior jockey, but Yusoff claims three, it’s perfect.”