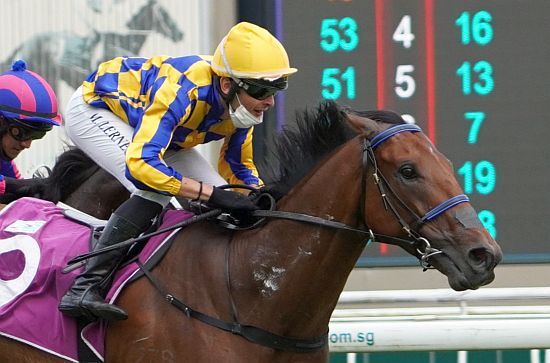 Just under two hours after Oxley Road, a promising Exceed And Excel four-year-old entire Gray races in partnership with both Singaporeans and Australians, gave the Kiwi trainer a big thrill by landing the last race on the undercard of the Caulfield Cup day 6,000km away, the red-letter day got even more surreal when his Singapore Derby winner Hard Too Think upstaged some of the best stayers in Singapore in the feature race formerly slated as the second Leg of the Singapore Triple Crown series.

Coming off a ground-saving third place on the rails, despite breaking from the widest alley (10), Hard Too Think (Marc Lerner) had only Katak (Matthew Kellady) in his crosshairs inside the concluding stages after race-leader Minister (A’Isisuhairi Kasim) faded out of the race.

For a few fleeting seconds, the prospect of witnessing Katak, the previously unbeaten five-from-five South African rising star, coming good at his new Singapore venture in a feature race was looking on the cards, but Lerner – who partnered Katak at his first two unplaced runs at Kranji – had other ideas.

The French jockey, who was certainly enjoying the rub of the green after winning three races earlier (Miracle, Hyde Park and Siam Warrior), must have got a whiff of a fantastic four-timer coming in a Group 1 race when he peeled Hard Too Think across the weakening Minister to collar Katak.

If some still doubted a winner at level weights against his own age group could get on terms with a Cape Winter Series Triple Crown winner in open company, the resounding reply came soon enough.

Hard Too Think ($26) ineluctably came Katak’s upsides at the 200m before forging clear towards a most impressive half-length win with Lerner easing down late. Interestingly, it was one of the lesser fancied member of Michael Clements’ awesome five, So Hi Class (Hakim Kamaruddin) who crept up along the rails to claim third place another 1 ¼ lengths away. The winning time was 1min 48.32secs for the 1800m on the Long Course.

Overwhelmed with emotion after his stable blue and yellow checked colours was thrust into the limelight for the second time in a day, Gray was still pinching himself as he tried to take in the enormity of the double occasion.

“I’ve had many happy days, many not so happy days, but today has to be one of the better ones,” said Gray who moved from New Zealand to Singapore in 2000.

“Winning that Group 2 race in Australia was already terrific, and then the QEII Cup, one of Singapore’s time-honoured races I had never won before and I’m now so proud I’ve finally won.”

It had been well documented Gray viewed the QEII Cup more as a stepping stone towards Hard Too Think’s grand final, the Group 1 Singapore Gold Cup (2000m) on November 14, but when hot favourite Lim’s Lightning was scratched through a minor injury sustained in a freak accident in the morning, Gray suddenly warmed to the real possibility the All Too Hard five-year-old could snag the secondary target after all.

The flip side of the coin to a win would be the handicapper whipping out his calculator.

Hard Too Think is currently in 10th spot on 80 points on the Singapore Gold Cup order of entry, in receipt of 10.5 kilos of topweight Minister (highly unlikely Lim’s Lightning on 111 points will face the starter), but Gray was dreading any hike following his half-length win on Saturday as he had all along been praying for a low weight in the marquee handicap race.

“He was already heavily penalised (13 points) after the Derby. He shouldn’t be too penalised, I don’t think he will be,” said Gray.

“The problem is there is no lead-up to the Gold Cup, so he has to do that in a race like the QEII Cup. We ran him and we won it, let’s hope he’s not weighted out of it.

“He’s a lovely horse, but I can’t sacrifice him by not running him in such races. I think such races should be penalty-free.

“It’ll now be interesting to look at the handicap. If Marc can make the weight, he has first pick even if I have spoken to Danny Beasley should the horse get in at a low weight.”

While the win could be seen by some as hollow without Lim’s Lightning, Gray saw the withdrawal more like a game changer.

“It’s sad and unfortunate that Dan’s (Meagher) horse got hurt. I’ve been in this place before,” said Gray.

“But once the favourite came out, I knew they’d go slow upfront, and there wouldn’t be much pressure from the inside, and my horse might be able to get across.

“I just told Marc to see how he jumps, I didn’t think they’d go crazy and he’d get stuck out wide. He got a beautiful ride right through, and he was too good.

“This horse has really improved since his break. He’s now a better horse, both physically and mentally.

“You can’t keep a horse away for too long, he has to race, even if there weren’t enough lead-up races.

“He’s got a lot of ability and I have even nominated him for the Hong Kong Vase (2400m) in December.”

Gray is no stranger to overseas travels, having made raids with Emperor Max and Lim’s Cruiser in the past, be it in Hong Kong or England.

Incidentally, the QEII Cup win also brought echoes of an Ascot meeting in 2015 when Gray had to learn how to curtsy in majestic presence.

“I’ve had the chance of having a good chat with the Queen at Ascot (QIPCO Championships) when Max ran, and today I’ve won the race named after her,” said Gray.

“I share today’s win with a great group of owners. It’s disappointing they can’t be here (because of no crowds at the races), but people race horses for these big races.

“The prizemoney is also a lot less now, but I’ll take the honour.”

Not too long ago, the total purse for the former second Leg of the Singapore Triple Crown series (discontinued this year) was worth one million dollars (Debt Collector was the last winner in 2018).

Still, Gray won’t be too hard to please with the cut of around $170,000 that has bumped Hard Too Think’s earnings up past the $520,000 mark for the Stephen Gray Racing Stable syndication. Hard Too Think has taken his record to five wins and four placings from 13 starts.

While the shortfall was not a financial factor he could just blank out of his mind, it was partially outstripped by the satisfaction gained from the human factor.

“It’s also great for my staff. I’m very grateful for them and my track rider boys who have stayed with me instead of going back to Malaysia,” he said.

“And how not to thank Marc. He trots and works Hard Too Think every morning, he works so hard. You get what you put in, good luck to him.”

Lerner has noticeably become part of the Gray furniture this year, and the reciprocal admiration showed at the post-race interview.

“Steve never puts any pressure on me. When you ride without pressure, that’s the best a jockey can hope for,” said Lerner who was recording his third Group 1 success after the Hideyuki Takaoka-trained Makanani in the 2019 Raffles Cup and Hard Too Think in the Singapore Derby.

“He again gave me carte blanche. Lim’s Lightning was the horse to beat, the target horse, but when he came out, we had to rejig our tactics and adapt.

“To be honest, I never thought I would have such a good cosy run in third place on the rails. It was a dream run sitting behind the leaders.

“Still, it was a bit of a funny old race. We thought Ocean Crossing would go forward and inject pace into the race, but I couldn’t have hoped for a better tempo in the end.

“At the 400m, I thought I’d had the perfect run. I was happy I didn’t have any runner who annoyed me, we had an economical run getting a lovely suck in behind.

“Still, I didn’t want to go too soon, I was happy to track up for as long as I could. Once I let him come out, he won in two strides.”

On his quartet of winners, his best to-date harvest since landing in Singapore in 2018, the former German-based rider couldn’t remember if he had ever pulled off that feat elsewhere (he also rode in France and the US), but what mattered to him, was the fantastic season it epitomised.

“There are days like that when things just flow beautifully,” said Lerner.

“I had six rides for four winners, one third and one fourth. On Hyde Park, I told Dan (Beasley on Lim’s Knight) he had won, but the photo finish showed I had won by a nose.

“With Siam Warrior, I told James (Peters) that I’d ride the horse more quiet, and he just left it to me, and it’s paid off, too.

“I also won for different trainers, which is great. With 39 winners, this is by far my best season.”

As for Gray who had no runners in the last of the bumper 12-race programme, he couldn’t wait to head home for a nice rewarding tipple, while maybe watching the video replays all over again, especially Oxley Road’s which he admitted gave him a slightly better kick given how hard it is to win Group races, albeit as an owner, in the hot cauldron of Australian horse racing.

“Oxley Road had already won a Group 3 race (Zeditave Stakes) already for us back in February. It was so exciting and such a massive honour to see him add a Group 2 today on one of Australia’s biggest racedays, the Caulfield Cup,” said Gray.

“He’s a lovely sprinter, even if he’s only a baby. They gave him a couple of weeks off after running third to Masked Crusader in a 1100m race at Caulfield in August, and Masked Crusader just ran a narrow second to Nature Strip in The Everest today.

“He’s a horse I should have brought here in Singapore, but in the end, we sent him to Australia to be trained by Peter Moody, who also won his first Caulfield Cup with Incentivise. What a great day for all of us!

“It’s great we raced Oxley Road in Australia as he has now won two Group races there, and he’s also a valuable colt. Hopefully, he can go on from here to win more races.

“I probably got more buzz out of that win as I was really nervous before the race. That will help towards the training bills!

“I own him with a group of people, including Craig Geehman, my racing manager and Ninetyfive Emperor’s owner, Mr HH Cheong, who also races some horses with me. They’re really excited and they’re really enjoying the ride.

“This has to be up there with one of the best days of my life. I’ll have a gin and drink to that!”